Depictions of countryside in Shakespeare

The countryside in Shakespeare's plays is sometimes a peaceful haven from a corrupt court or city, but at other times it's mysterious, magical, inhospitable or even dangerous. Eric Rasmussen and Ian DeJong explore Shakespeare's outdoor spaces, from the enchanted forest in A Midsummer Night's Dream to King Lear's blasted heath.

Some of the most memorable scenes in Shakespeare take place outside. From the Arcadian entanglements of As You Like It to the blasted heath of King Lear, Shakespeare's plays incorporate manifold elements of the natural world, while featuring rural characters and settings in the countryside. This predilection for nature may be due in part to Shakespeare’s upbringing in rural Warwickshire, but the Bard’s relationship with nature is more complicated than mere nostalgia. Although Shakespeare’s countryside can at times be pleasant, pastoral and safe, it can just as easily be mysterious, dangerous and downright terrifying.

The son of Stratford

Shakespeare’s Stratford-upon-Avon was a small town, surrounded by and dependent upon local agriculture. His parents hailed from agricultural families. Young Will no doubt played happily in the rivers, marshes, fields and woods around Stratford. As an adult, Shakespeare of course found permanent employment – and a home – amid the streets and buildings of London. But before going to London, he may have been employed in the provinces, surrounded by the countryside that figures so largely in his plays. One hypothesis suggests he taught at a school in Lancashire; another claims he toured the provinces with an itinerant acting company. Though he lived in the city for much of his adult life, Shakespeare returned to the country repeatedly in his work. As Jonathan Bate has written, Shakespeare was ‘a provincial outsider, and that may go some way to explaining why he was so fascinated by outsiders such as Shylock the Jew and Othello the Moor in Venice’.[1]

The most popular formulation of countryside in Renaissance poetry and drama was the pastoral aesthetic. Sir Philip Sidney’s Arcadia, a long prose piece somewhat akin to a novel, achieved significant popularity in Elizabethan England. Arcadia’s depiction of shepherds, young love, and mistaken identity represents the ideal of the pastoral, invested with all of the pleasant trappings of agriculture but none of its stench or muck. The early modern pastoral was an idealised, harmonic setting, innocent, pleasant and alluring in the rural beauty it presented. This emphasis on simplicity and beauty contrasted sharply with the often cruel political arena of the royal court, the grimy streets of major metropolitan centres, and the sickness infecting the country’s body. Whether written or performed, the early modern pastoral represented an inexpressibly attractive, impossibly romanticised alternative to the grim realities of early modern life.

The Countesse of Pembroke’s Arcadia by Philip Sidney, 1590

Love and shepherds: Sidney’s prose romance represents the ideal of the pastoral. 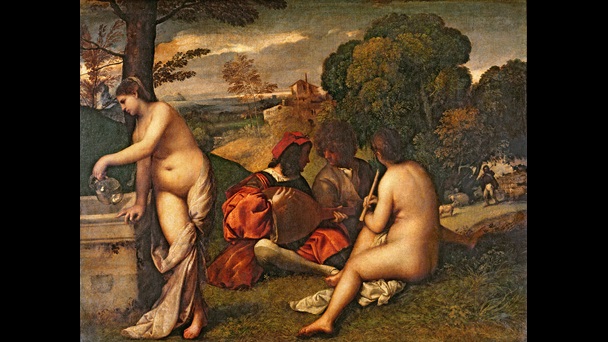 A pastoral scene set in a tranquil rural landscape with a shepherd tending his flock in the background.

Shakespeare plays upon the pastoral genre in his late play The Winter’s Tale. The first half of the play, set entirely in the urban confines of the Sicilian court, is dark, even tragic: a monarch’s jealousy of his wife leads him to commit massive brutality against her and their daughter. The second half (after the famous stage direction ‘Exit, pursued by a bear’) shifts dramatically to a pastoral setting in which the daughter, exiled to a distant land, is raised by comic rustics, who dance and joke and have ‘sheep-shearing’ festivals. In The Winter’s Tale, the country is a mythical place, where danger (as represented by ravenous bears) rapidly gives way to comfortable fictions of clownish shepherds and alluring shepherdesses.

A similar construction of nature and the countryside emerges in As You Like It, set in the Forest of Arden, perhaps named after Shakespeare’s mother, Mary Arden. The forest here is somewhere between the mythical pastoral of The Winter’s Tale and a more mysterious setting. Although As You Like It participates in the traditions and conventions of the pastoral, with highborn lovers wandering in nature to find happiness with each other, it leaves the pastoral behind when a lioness attacks and wounds one of the protagonists; characters lose each other, and themselves, in the trees. But in the trees, too, characters find out surprising things about themselves and each other. For instance, Orlando pins love-poems to Rosalind on tree-trunks – and Rosalind is surprised to hear that he does so. Later, in a major moment of plot resolution, the usurping Duke Ferdinand repents of his violent intentions on ‘the skirts of this wild wood’ (5.4.153). The Forest of Arden, then, challenges its inhabitants, upending their expectations and upsetting viewers. Ultimately, though, Arden is pleasant countryside, a place where lovers meet and happy endings are possible.

Places of mystery, places of magic

The prehistoric British wilderness in Cymbeline and the forest outside Athens in A Midsummer Night’s Dream further trouble the pastoral trope by offering a natural world that is rather other-worldly. In Cymbeline, the adventures of the wronged queen Imogen lead her to the Welsh mountains. Her health failing, Imogen takes shelter in caves inhabited by her two long-lost sons and the traitor who stole them at birth. There, in the damp darkness, she meets her sons without knowing them; then as they defend her from an intruder, her sickness worsens. She drinks a sleeping-potion, believing it to be medicine, and falls dead-asleep. Shocked at what appears to be the dead body, the long-lost sons, never suspecting their mother’s identity, leave the intruder’s corpse beside hers. This complicates an already labyrinthine plot, especially when Imogen wakes next to a headless body. The caves in Cymbeline are somewhere between history and myth; the real and the unreal balance each other, neither prevailing. In their mystery and their power to affect narrative, Cymbeline’s caves resemble the woods in A Midsummer Night’s Dream. 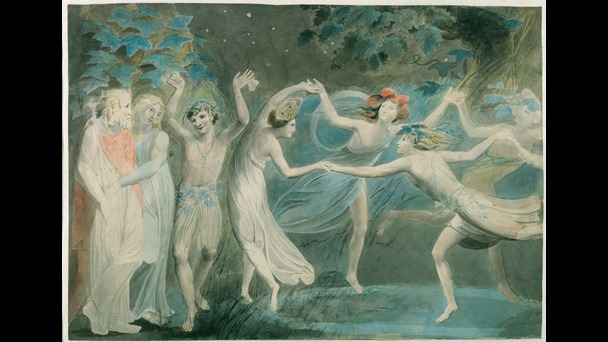 Nature as otherworldly: in a wood, the fairies perform a ring dance.

In contemporary English, ‘wood’ is a noun, with senses linked to trees and organic material. In Elizabethan English, it had this meaning – but it was also used as an adjective to mean ‘mad’ and as a verb to mean ‘to go mad’ – both these senses are etymologically linked to Old English, Old German, and Old Norse. The woods in A Midsummer Night’s Dream link these two senses. A place of nature and a place of unsettled reality, the Athenian forest in A Midsummer Night’s Dream is also emphatically non-human: ruled by fairy monarchs, populated by fairy inhabitants, terrorised by the pranks of Robin Goodfellow. The human visitors – Demetrius, Hermia, Helena, Lysander, and the ‘rude mechanicals’ who intend to rehearse a play there – leave forever changed by their transgression of its borders. Demetrius even references the doubled meanings of ‘wood’ in Act 2, Scene 1: spurning Helena’s love, he exclaims ‘And here am I, and wood [i.e. mad] within this wood [i.e. forest], because I cannot meet my Hermia’ (196–97). If Cymbeline’s caves straddle the boundary between the natural and the supernatural, the forest in A Midsummer Night’s Dream leaves it far behind. Though Athens is not seven leagues distant, the woods in A Midsummer Night’s Dream are off the edge of the map. 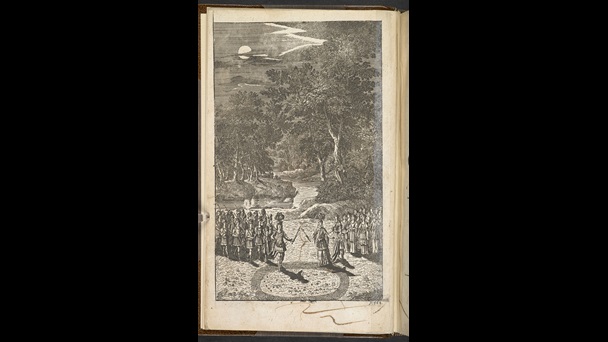 The woods made sinister by their inhuman inhabitants. 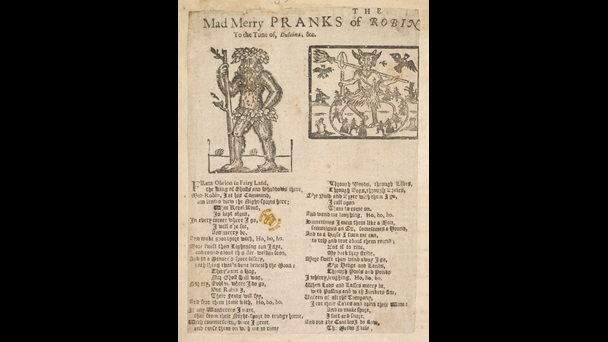 Robin Goodfellow, derived from rural folklore, depicted as a wild man of the woods (left) and as a satyr (right).

In King Lear, the natural world is a stormy wilderness, into which the King is turned out by his daughters. Lear’s mental health continues to erode as he wanders on the desolate heath, battered by wind and rain, attempting to cope with his decaying humanity. Kent describes the situation powerfully in Act 3, Scene 2:

...the wrathful skies
Gallow the very wanderers of the dark,
And make them keep their caves: since I was man,
Such sheets of fire, such bursts of horrid thunder,
Such groans of roaring wind and rain, I never
Remember to have heard: man's nature cannot carry
The affliction nor the fear. (40–46)

Nature in King Lear is neither the mythic pastoral of The Winter’s Tale nor the otherworldly mystery of A Midsummer Night’s Dream. Rather, it is crushingly, overwhelmingly massive. Its scale is gigantic beyond knowing, a reality which neither notices nor regards the infinitesimal humans crawling about upon the skin of the great globe itself. Nature, in King Lear, exceeds man’s ability to comprehend it.

Souvenir of Henry Irving’s King Lear at the Lyceum Theatre, 1892

The stormy wilderness of King Lear is crushing in its enormity. 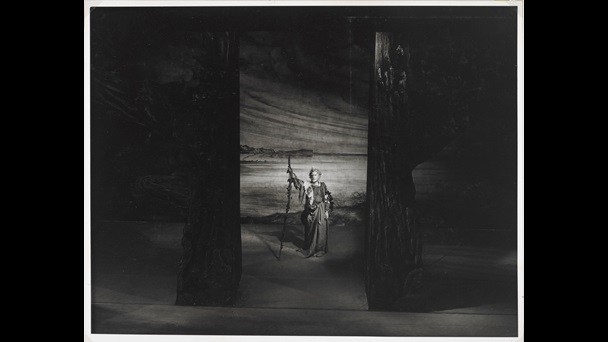 An on-stage depiction of Dover Cliff and the bleak indifference of Nature to man.

The countryside in King Lear is unpleasant because it is brutally unfeeling, not because it is dangerous. Countryside in Titus Andronicus differs from that in King Lear; though the two plays both present a dangerous natural world, Titus’s forest poses different dangers from those on Lear’s heath. In the second act of the play, Chiron and Demetrius – two of the play’s primary antagonists – kill Bassanius and rape and mutilate Lavinia (Bassanius’s lover). They are able to accomplish this because of the remoteness of the woods: no one is nearby to witness Bassanius’s death or Lavinia’s rape, so when Chiron and Demetrius cut out her tongue and cut off her hands, the secret of their crime is apparently safe. In Titus Andronicus, the natural world is dangerous because of the people in it and their willingness to exploit it. The uncontrollable remoteness of the natural world makes it a place of opportunity; the uncontrolled violence of the play's antagonists makes it a place of danger, and the crimes committed within its bounds reverberate throughout the rest of the play.

Macbeth extends the trope of the dangerous natural world further. The Weird Sisters meet on ‘a blasted heath’. To speak to them, Macbeth must leave the controlled bounds of civilisation and meet them in the wildness of the Scottish countryside. The natural in Macbeth is not chiefly vast and unknowable, as in Lear. It is not wholly remote, lawless, a place where criminals may transgress with impunity, as in Titus. Macbeth configures the countryside differently, as dangerous, uncontrolled, and uncontrollable by any human agency. Nature in Macbeth is actually and actively supernatural.

The History of Scotland by John Leslie, 1578 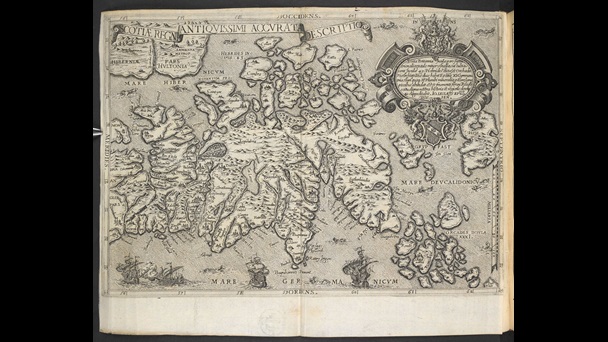 The first separate map of Scotland in a printed book. A spectrum of nature

The range of countrysides available in Shakespeare’s plays makes it clear that the Bard had more than a nostalgic affection for the countryside in which he grew up. He was aware of the mystery inherent in nature, the inaccessible conundrums it posed. He had a sense, too, of the danger that wilderness could pose: highwaymen, rapists and murderers still prowled the forests in early modern England. Most intriguingly, he seems to have thought of nature as somehow linked to the supernatural. At points, he presents that supernatural as approximately benevolent, as in A Midsummer Night’s Dream. Sometimes he presents it as threatening or dangerously mysterious as in Macbeth. Throughout his oeuvre Shakespeare demonstrates his understanding of the countryside; he knows its dark and its light sides. And he sees it for what it is: fundamentally resistant to oversimplification.