Gender in Measure for Measure

Kate McLuskie explores how Shakespeare used a comic framework in Measure for Measure to debate ideas about rights, responsibilities and the social regulation of sexual relations.

Measure for Measure is a play that seems to come of age in the 21st-century globalised world. The conflict it presents between individual rights to sexual freedom and the responsibilities of rulers to regulate their subjects’ sexual behaviour is once again a live issue in the politics of human rights across the world, and in the fiercely argued debates within the international women’s movement about the regulation of sex-work. In every modern society it’s possible to find examples of the social behaviour depicted in the play: rulers sometimes execute citizens for illegal sexual relationships; powerful men have been known to expect sexual favours in return for doing their jobs; and marriage is sometimes still imposed as a way of solving a social rather than a personal problem. The apparent relevance of the play for our time was stressed in the three London productions that took place in London in 2015, and at the Globe Theatre it was included in a season devoted to questions of 'Justice & Mercy'. 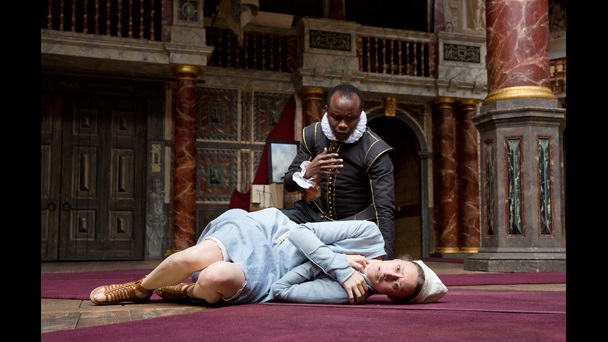 Angelo agrees to show mercy towards Isabella’s brother, if she will have sex with him.

These questions of human rights and freedoms build an important connection between Shakespeare’s writing and our time. However, where the politics of human rights and sexual exploitation is a deadly serious matter, Shakespeare wrote a comedy. He used the formulaic device of the ‘prince in disguise’ and the implausible mechanisms of the ‘bed trick’ and the ‘substitute bride’ to achieve his comedic outcome in which the emotional life of his characters is manipulated by the author, or the ruler. The fate of Shakespeare’s lovers had always involved coincidence and clever plotting and he often gently mocked his lovers’ romantic illusions by showing how they came out of storytelling traditions.[1] Here, however, the difficulties that cross the path of true lovers are complicated more explicitly by the legal framework of contract and dowry, while the central narrative of Angelo’s desire for Isabella can only be resolved by the completely unpredicted story of Mariana’s betrayal. At every turn, the women’s past lives complicate the possibility of a simple happy-ever-after ending in marriage. Mariana has been rejected by her chosen bridegroom; Isabella has already determined to be a nun (unlike her counterparts in the sources for the play[2]); Juliet, following custom rather than law, has consummated her marriage before the ceremony; and Mistress Overdone, as well as being married nine times, runs the brothels that provide commercial opportunities for sex.

Cinthio's Gli Hecatommithi, an Italian source for Othello and Measure for Measure 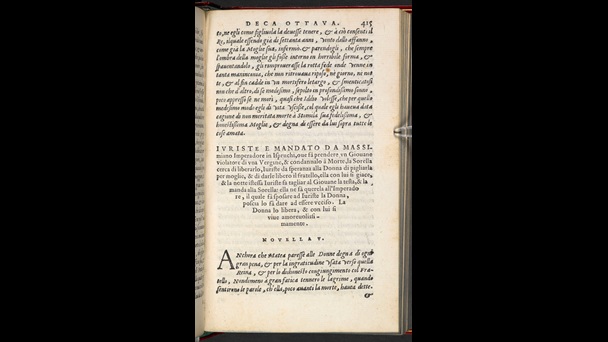 An Italian tale by Cinthio may have been a source for Shakespeare’s Measure for Measure. Cinthio’s heroine is not a nun, but Shakespeare might have got the idea from the Italian word ‘la Sorella’, which meant ‘nun’ as well as ‘sister’.

Promos and Cassandra by George Whetstone, 1578 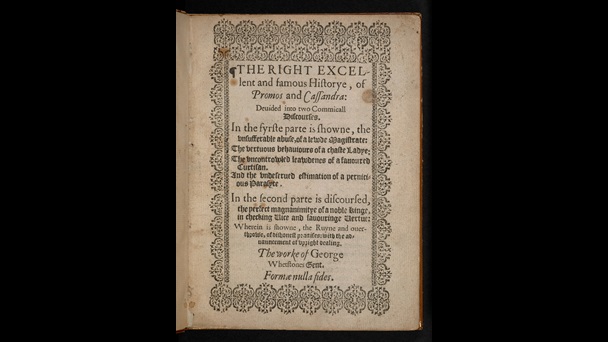 It seems more likely that Shakespeare would have seen Whetstone’s Historye of Promos and Cassandra, an English adaptation of Cinthio. But it was Shakespeare who gave Isabella a religious vocation, unlike Whetstone’s Cassandra.

The women whose stories create the play’s narrative strands are joined by others: Kate Keepdown the sex worker, deceived and abandoned by Lucio (3.2.192–97), Bridget, the once-mentioned mistress of Pompey (3.2.76); and Mistress Elbow, the Constable’s pregnant wife who has been sexually harassed by Froth, the rich young man about town. These women are shadowy figures, but their stories extend the play’s social world in which sexual relations seem peculiarly unmanageable even when the women conform to respectable social expectations. In Shakespeare’s day, it is possible that bizarre contraptions like this were used to control when a woman had sex, by keeping her under lock and key.

In creating this social world, Shakespeare was following the trend of new playwrights such as Thomas Middleton who wrote witty, bawdy, urban plays that were blunt about sexual misconduct and cynical about love. Unlike his young contemporaries, however, Shakespeare moved beyond comedy to address the social consequences of sexual behaviour. He explored wider questions of how to maintain law and order, but suggested that policing sex was often problematic.

Photograph of Dean Nolan, Petra Massey and Trevor Fox in Measure for Measure, 2015 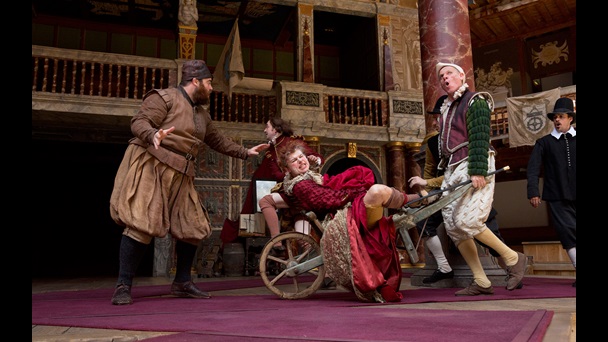 The hapless constable Elbow attempts to expose the ‘abuses’ of the brothel-keeper Mistress Overdone and her servant Pompey.

Angelo’s new law against sexual misdemeanours is put to a comic test when the good magistrate Escalus deals with Elbow’s case against Froth and Pompey for propositioning his wife (2.1.41–272). Escalus’s supreme patience in dealing with the witness’s comic misunderstandings demonstrates the difficulty of putting high-minded legal absolutes into practice. After Angelo has left the scene impatiently, Escalus hears out the case, dismisses Froth with a warning, arranges for Elbow to be replaced by another community police-officer and makes clear to Pompey what the consequences of future offences will be. Yet this measured approach to the sex-trade cannot completely control it. As Pompey observes, sex work would be lawful ‘if the law would allow it’ (2.1.223), and his later description of the prison overcrowded with stupid rich young men, ‘all great doers in our trade’ (3.1.19), presents an unhopeful view of the possibility of sexual reform through imprisonment.

Short of a proposal ‘to geld and splay [castrate] all the youth of the city’ (2.1.227–28), controlling men through prison is ineffective. Marriage, on the other hand, provides a system where men and women could be expected to control one another and provide an appropriate social setting for sex. Swinburne tries to untangle the knotty question of marriage pre-contracts in 17th-century England.

When Isabella hears that her brother’s girl-friend is pregnant, she exclaims: ‘O, let him marry her!’ (1.4.49), and when the Duke devises the elaborate subterfuge that resolves Mariana’s situation, he explains how the technicalities of matrimony trump all other considerations:

He is your husband on pre-contract
To bring you thus together ‘tis no sin,
Sith that the justice of your title to him
Doth flourish the deceit. (4.2.72–75) In Shakespeare’s play, Mariana is married off to Angelo, the man who had abandoned her when her dowry was lost at sea.

The dramatic interactions in the play offer little scope to challenge this view. The love affair between Claudio and Juliet is given scant dramatic space and, faced with the Duke’s reproaches (2.3.19–42), Juliet repents her love affair as ‘evil’; Isabella and Mariana discuss the Duke’s bedtrick plot off stage; Mariana makes no comment when she is summarily married to Angelo, and when she and Isabella plead for Angelo’s life, neither is given any lines to explain their change of heart. Even the extraordinary eloquence with which Isabella pleads her case with Angelo (Act 2, Scene 2) and her passionate defence of her chastity (Act 3, Scene 1) are constructed as rhetorical arguments that make her attractive as a sexual partner to Angelo and allow her to pass the tests of ethical fitness the Duke requires. Isabella’s initial vocation to lead a life of ‘strict restraint’ with ‘the votarists of St Clare’ (1.4.4) is not referred to again once she is engaged in the plot to save her brother’s life. The religious and social movement that had inspired powerful, holy and creative women to run convents all over Europe is reduced – as it had been in other Protestant narratives about nuns[3] – into a story of chastity attacked. The nuns shown in this painting are probably Poor Clares – a powerful religious movement which inspired holy women to run convents all over Europe.

In more recent times, the women’s silence about their personal feelings in relation to marriage has created opportunities for readers and especially women performers to imagine what those feelings might be. Even when they have no lines, an actor’s silence on stage can be given significance by the length of time it lasts, and its accompanying body language. It became commonplace in late 20th-century performances for Isabella silently to reject the Duke’s marriage proposal and leave the stage alone. Adaptations that changed lines or refocussed the conventional understanding of character could also make the gender politics even more emphatic. The Russian contribution to the 2012 World Shakespeare Festival at London’s Globe Theatre, for example, insisted that the play world’s corruption permeated the whole of society. Casting the same actor to play both Angelo and the Duke allowed the same gestures to accompany Angelo’s proposed rape and the Duke’s proposal of marriage. The effect on Isabella was to leave her ‘angrily distraught and curled up in a foetal position’.[4] 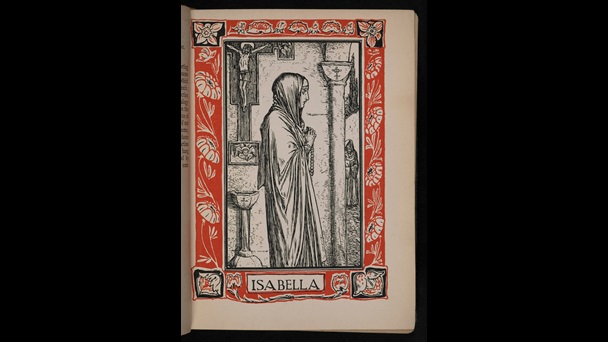 The combination of performance and adaptation that puts more pressure on the play’s sexual politics has also opened up the comic space around the libertarianism of Vienna’s lowlife. The theatrical conventions for representing Shakespeare’s sex workers have tended to emphasise raucous self-exposure[5] in which the audience is invited to share the perspective of Lucio or Pompey Bum. Those performance decisions highlight the play’s central opposition between the sanctioned authority of the state and religious authorities and the unlimited pleasures offered by commercial providers. Those stark contrasts were not the only alternatives on offer in Shakespeare’s time.[6] and they are not the only alternatives on offer today. Shakespeare, however, chose to place those alternatives centre stage and leave Juliet, Mistress Elbow and Kate Keepdown as possible, silent and shadowy, images of people who might have negotiated their way around them. Fascinatingly, recent research has shown how Shakespeare himself was later involved in a case of an unpaid dowry and a theatrical collaboration with a brothel keeper.[7] But that is not the story he chose tell.

[1] See, for example, the list of play formats described in Lysander’s account of how 'the course of true love never did run smooth' in A Midsummer Night’s Dream 1.1.132–55, or Touchstone’s constant mockery of Orlando’s love for Rosalind in As You Like It (Act 3, Scene 2).

[2] Including George Whetstone, The Historye of Promos and Cassandra (1578).

[5] See, for example the images from the 2015 Globe production in Mark Lawson ‘The Power of Shame: Why Measure for Measure is more relevant than ever’, The Guardian, 27 October 2015. https://www.theguardian.com/stage/2015/oct/27/measure-for-measure-shakespeare-young-vic-globe