How were the Jews regarded in 16th-century England?

Jews in 16th-century England practised their religion secretly, and many of those raised in the Jewish faith either converted to Christianity or pretended to have done so. James Shapiro considers Elizabethan prejudices and paranoia about Jews, putting Shakespeare's Shylock in context.

There weren’t many Jews in Elizabethan England. At most a couple of hundred could be counted among the thousands of strangers living in late 16th-century London. Virtually all of them practised their faith in secret: most were of Spanish or Portuguese descent, Marranos who had survived the Inquisition and were adept at disguising their beliefs. Nonetheless, we know from Spanish and Portuguese Inquisition records and from the repeated complaint of Catholic ambassadors residing in England that members of this small Jewish community in London did meet to observe Passover and Yom Kippur. 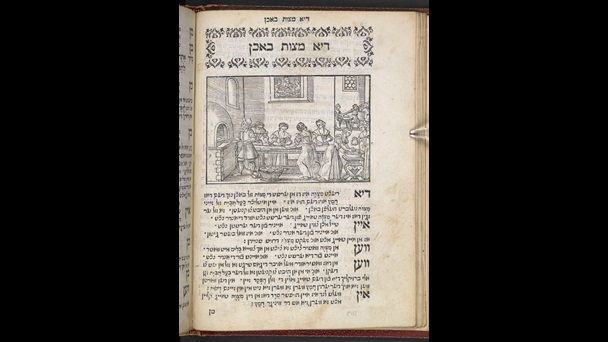 People baking matzah for Passover, from a book of Jewish customs printed in Venice, 1600. Such a book could not have been published in England, where Jews could only practise their faith in secret.

Perhaps the most notorious of these Jews was Roderigo Lopez, Elizabeth’s personal physician, drawn and quartered in 1594 for allegedly conspiring to poison the Queen. The historian William Camden reports that Lopez went to his death strenuously ‘affirming that he loved the Queen as well as he loved Jesus Christ; which, coming from a man of the Jewish profession, moved no small laughter in the standers-by’. Other Jews had probably been assimilated, including members of a small group of court musicians of Italian descent, the Lupos, Comys, and Bassanos, brought over by Henry VIII around 1540.

Doctor Lopez is accused of poisoning Elizabeth I 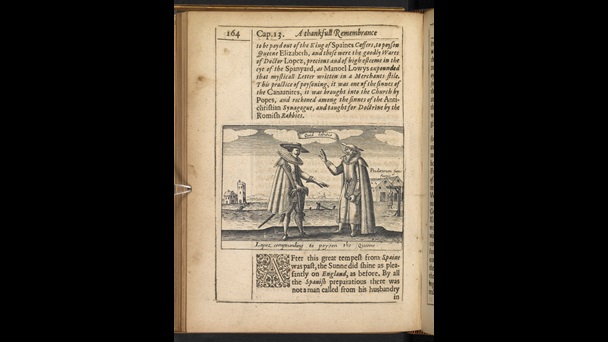 Elizabeth’s Jewish physician was drawn and quartered for allegedly plotting to kill the Queen. The scandal is recounted in George Carelton’s A Thankfull Remembrance of Gods Mercy, 1627.

Predictably, Jews, usually converted ones, could also be found teaching Hebrew at Oxford and Cambridge, or helping Bodley with the Hebrew catalogue at the University Library. One of the more interesting Jews – in part because he was unwilling to deny his faith – was Joachim Gaunse, a mining expert from Prague who lived openly as a Jew until his encounter in Bristol in 1589 with Reverend Curtys, a Protestant minister eager to practise his Hebrew. Outraged with Gaunse’s evasive response to Christ’s authority – ‘What needed the Almighty God to have a son, if he is Almighty?’ – Curtys and the mayor and aldermen of Bristol referred this heresy to the Privy Council, and Gaunse, despite his earlier service to the state and his participation in Ralegh’s Roanoke expedition, was probably hustled out of the country – for that is last we hear of him.

The lives of many other, anonymous Jews in England will necessarily remain unrecorded. We have just glimpses of a few, like the Jew that Sir James Lancaster took with him from London to serve as his translator in his East Indies expedition; or the unnamed Jew asked to assist in translating a letter sent to Queen Elizabeth from Constantinople, concerning Hugh Broughton’s efforts to convert Turkey’s Jews and thereby secure the Eastern trade for English merchants.

Had Shakespeare wished to speak with someone raised in the Jewish faith he could have done so easily enough. There was a converts’ house in London, the Domus Conversorum, which was in existence on Chancery Lane from 1232, when it was founded by King Henry III as a home for poor Jewish converts to Christianity. Throughout the 16th century (with the exception of the years 1551–78), a handful of poor Jewish converts resided there. One of them, Yehuda Menda, had been publicly converted at All Hallows Church in London in 1577 by John Foxe, more famous for his Book of Martyrs. Foxe tells us in his Sermon Preached at the Christening of a Certain Jew that Menda had lived in London as a Jew before his conversion, having been ‘transported from out the uttermost parts of Barbary into England, and conversant amongst us, by the space of five whole years’ before his baptism. Foxe’s sermon gives a vivid sense of some of the disturbing beliefs Elizabethans held about Jews: he speaks of their ‘heinous abominations, insatiable butcheries, treasons, frenzies, and madness’.

Foxe also charges them with ritual murder, condemning their ‘intolerable scorpion-like savageness, so furiously boiling against the innocent infants of Christian Gentiles’. Samuel Purchas elaborates upon this accusation in his Purchas his Pilgrimage. ‘One cruel and (to speak the properest phrase) Jewish crime was usual amongst them every year towards Easter ... to steal a young boy, circumcise him, and after a solemn judgement, making one of their own nation a Pilate, to crucify him out of their devilish malice to Christ and Christians.’ Even John Donne offers a variant of this libel in one of his sermons where he describes the ‘barbarous and inhumane custom of the Jews,’ who ‘always keep in readiness the blood of some Christian, with which they anoint the body of any that dies amongst them, with these words, “If Jesus Christ were the Messiah, then may the blood of this Christian avail thee to salvation.”’

Illustrated book of the wonders of nature 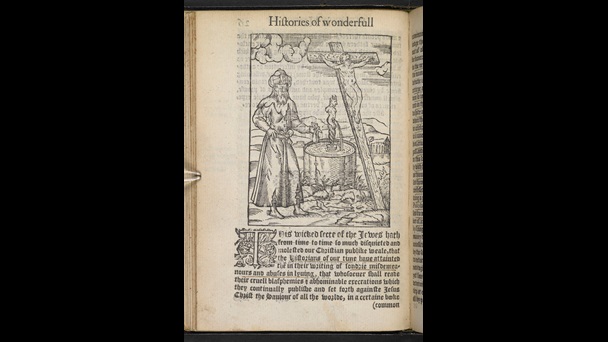 Jews were accused of poisoning Christian wells, as shown in Pierre Boaistuau’s collection of weird and mythical tales, Certaine secrete wonders of Nature, 1569.

Many of the chronicles and histories published at the time were full of stories of Jewish criminality. Jews were described not only as circumcisers and emasculators of Christian men (and as seducers of Christian women) but as poisoners, usurers, and host desecrators. Sir John Mandeville’s popular Travels, reprinted well into the 17th century, even warns of a Jewish military threat: at the time of Antichrist the Ten Lost Tribes of Israel, now penned in beyond the hills of Cathay, ‘shall come out, and Christian men shall be in their subjection, as they be under Christian men now.’ A number of writers proposed that after their expulsion from England in 1290 the Jews had migrated to Scotland, which explained why Scots were so close-fisted and hated pork. There was even a scheme to resettle foreign Jews in Ireland: in 1607, Sir Thomas Shirley urged King James to resolve in one stroke both the Irish and the Jewish problem, while reaping the benefit of heavy taxation. His suggestion was not acted on (though it was still taken seriously enough a half-century later in James Harington’s political treatise, Oceana).

Broadside ballad on 'the cruelty of Gernutus the Jew' 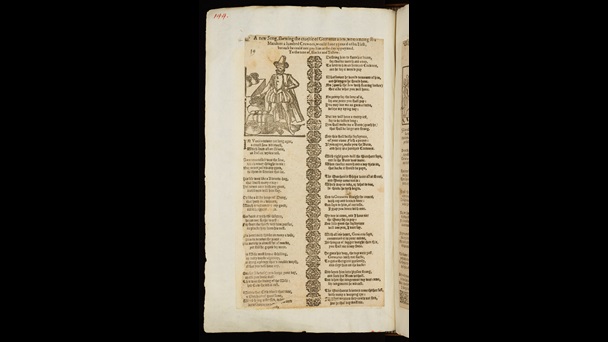 The tale of the cruel Jew Gernutus and his bond with a Venetian merchant (c. 1620) was one of the anti-Semitic stories circulating in Shakespeare’s England. It may be a source for The Merchant of Venice.

The Jew’s body was a site of particular anxiety. English writers, including both Christopher Marlowe and Thomas Dekker, make much of the foeter judaicus, the so-called Jewish stench. James Howell’s view is representative: ‘it seems there is a kind of curse also fallen upon their bodies; witness the uncouth looks and odd cast of eye,’ as well as ‘that rankish kind of scent no better indeed than a stink.’ The blackness of the Jews also caught the attention of a number of writers; when William Brereton jotted down his impressions of the Jews in the synagogue in Amsterdam in 1635 he noted that the Jewish ‘men are black ... and insatiably given unto women.’ Perhaps the most bizarre of the claims made about the Jews was one tentatively advanced by Thomas Calvert, who argued that Jewish men menstruated: ‘Jews, men as well as females, are punished curso menstruo sanguinis, with a very frequent blood flux.’

While the overwhelming majority of Elizabethans had never knowingly met a Jew, by the end of the 16th century, interactions between Jews and English were becoming more frequent, especially abroad, in Morocco and Turkey as well as in Antwerp, Amsterdam and Venice, where Jewish communities were flourishing. These encounters gradually called into question many of the stereotypes that had prevailed in an England largely free of Jews for 300 years. When the Elizabethan merchant John Sanderson found himself travelling through the Holy Land in 1601 alongside a Jew named Abraham Cohen he was shocked to discover that ‘for moral carriage towards all, understanding, and honesty, this Jew was without company.’ When they parted, Sanderson added, it ‘was not without moist eyes between Jew and Christian.’ 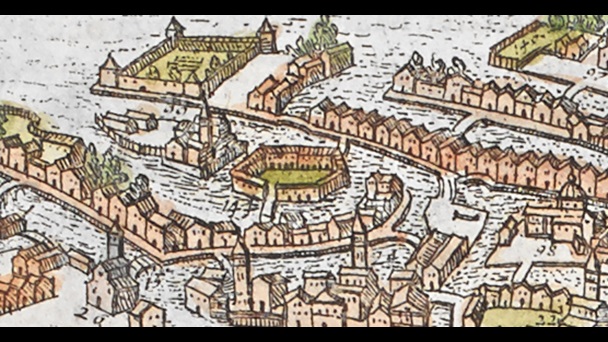 The Jewish Ghetto of Venice, where a large community of Jews lived from 1516. This is a detail from the view of Venice in Braun and Hogenberg’s opulent atlas of the world’s cities, c. 1600–23.