'Over-stink', 'instinctively', 'bow-wow', 'reeling-ripe': some of the words in The Tempest appear nowhere else in literature, whereas others have become embedded in the English language. David Crystal takes a look at Shakespeare's verbal ingenuity.

Some of Shakespeare’s most vivid word-creations turn up in The Tempest. My favourite is Trinculo being described as reeling ripe – so drunk he’s staggering about. But that has to compete with such evocative adjectival compounds as cloud-capped (towers), strong-based (promontory) and pole-clipped (vineyard), or the noun compound demi-puppets, or the verb compound weather-fend (defend against the weather). These feel like the product of a linguistically creative mind.

Photograph of Ian McDiarmid and Aidan Gillian in The Tempest, 2000 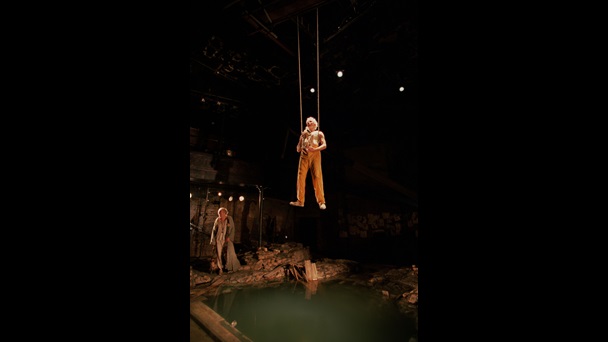 The Almeida Theatre’s 2001 production of The Tempest. A water tank built into the stage concealed a secret exit, allowing Aidan Gillen’s Ariel to dive into the pond and vanish from sight.

Undoubtedly, some of the first recorded usages found in this play are coincidences: Shakespeare just happens to be the first person we know to have written them down. When the spirits sing ‘the watchdogs bark, bow-wow’ (1.2.385), it might come as a surprise to know that this is the first time we see both watchdogs and bow-wow written down in English (the latter in the remarkable Folio spelling, bough-wawgh). But they would have been in the language long before that, as would Ariel’s grumblings and Gonzalo’s leaky (ship/wench). And the same probably applies to blue-eyed (hag), grass-plot and Caliban’s high-day (i.e. a variant of hey-day, meaning a day of celebration). But some of the new compounds have an uncertain status: are Caliban’s footfall and Ariel’s mid-season everyday local expressions or poetic adaptations? It’s difficult to say.

In total, there are 45 novel forms in The Tempest. We see new prefixed words in betrim (to trim something), discase (take off clothing), over-topping (being over-ambitious) and the splendid over-stink (drown the smell of), describing the foul water into which Ariel leads Stephano and the others. There are new suffixed words too: baseless (fabric) and printless (foot), razorable (chins), the adverbs instinctively and rootedly, and the mouth-twisting chirurgeonly (like a surgeon). That last is not the only polysyllabic monster: note also expeditious (sail) and unmitigable (rage).

Photograph of a model ship in a storm used in The Tempest, 1998 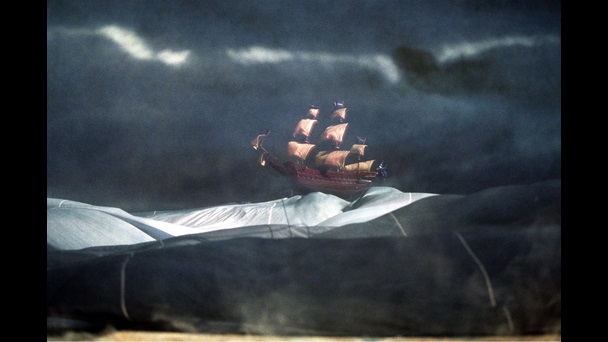 A model ship in a storm, in the Royal Shakespeare Company’s production of The Tempest, 1998

Several of the most descriptive new words relate to natural phenomena: bosky (acres), mountain winds, pignuts, sedged crowns, unshrubbed (down), closing (waters) and the mysterious and much-debated pioned and twilled brims (possibly, trenched and woven with sticks to prevent erosion). Windring (brooks) is another puzzle. Was this a misprint for winding or a poetic blend of winding and wandering? And editors have thrown in the towel over scamels, the (presumably) species of shellfish that Caliban promises to find for Stephano and Trinculo.

We see a few new parts of speech formed by changing a noun into a verb, a favourite creative device of Shakespeare: bass (my trespass), hand (a rope) and throe (agonize, as if in childbirth), and three instances of a verb becoming an adjective: scandalled (company, i.e. ‘shameful’), suffered (labour, i.e. ‘endured’) and collected (meaning ‘composed, calm’), as in Prospero’s words to Miranda: ‘Be collected’ (1.2.13). And there is a lovely case of a metaphorical extension, when Prospero tells her about his earlier life, and the days when he decided ‘who t’advance and who / To trash for overtopping’ (1.2.80–81). How to express the notion of restraining people who are over-ambitious in court? The metaphor is from dog-handling while hunting: to check a hound with a leash. Its etymology is obscure, but its dramatic impact is not. It adds support to any characterisation of Prospero as a tough ruler. You don’t mess with him, as the other characters in the play soon learn.

This article first appeared in Around the Globe, the membership magazine for Shakespeare's Globe. The original can be found listed under 'Book and Articles' on David Crystal's website.