The Duchess of Malfi and Renaissance women

The Duchess of Malfi is an unusual central figure for a 17th-century tragedy not only because she is a woman, but also because, as a woman, she combines virtue with powerful sexual desire. Dympna Callaghan places Webster's character in the context of contemporary drama, politics and discourses about widows and female sexuality.

John Webster’s Duchess of Malfi is in many ways a remarkable forerunner to the adulterous and tragic heroines found in landmark 19th century novels (think Gustave Flaubert’s Madame Bovary (1856) and Leo Tolstoy’s Anna Karenina (1878)). However, unlike these later heroines, Webster’s Duchess exercises transgressive, independent sexual agency in defiance of social conventions not through infidelity but through marriage, or more accurately, remarriage. While, given the prevailing ideas about female behaviour in the 19th century, the sexual choices of Emma Bovary and Anna Karenina necessarily bring them to tragic ends, remarriage in the 17th century was not inevitably a recipe for tragedy. In fact, it was a popular topic for city comedy. Webster’s Duchess defies social and sexual orthodoxies in ways that are not dissimilar to those of comic widows. What lends itself to tragedy in the Duchess’s situation is that, unlike her comic counterparts who are the widows of merchants and citizens, she is the head of state.

First Edition of John Webster's The Duchess of Malfi, 1623 John Webster’s tragedy was unusual for the period as its titular hero was a woman (albeit a nameless one).

Gender and the genre of tragedy

The Duchess of Malfi raises questions about the nature and gendering of political authority, as well as expectations about tragedy as a genre. The figure of the Duchess combines the roles of tragic protagonist and tragic victim, and occupies a dramatic centrality that is conventionally only accorded to male characters, such as Shakespeare’s great tragic heroes: King Lear, Othello and Hamlet. However, up until the feminist movement of the 1970s and 80s, the overwhelming weight of (male) critical opinion on the play held that The Duchess of Malfi lacked a centre and focus for its action because critics tended to equate tragic centrality with masculinity. The Duchess dies at the end of Act 4, rather than in a grand finale of Act 5 as in the typical structure of ‘great man tragedy’ – but this is arguably not because the Duchess fails to command our attention as the mainstay of the action. Indeed, her echo is literally to be heard in Act 5, Scene 3, and this whole last act is permeated with a powerful sense of her afterlife and continuing moral centrality in the play. In the context of a culture that understood power and virtuous femininity to be mutually exclusive, the Duchess’s character questions what it means to be ‘great’ in tragedy. Furthermore, by means of Act 5, which treats the aftermath of her death, we are asked to confront the consequences of violence.

Patriarchal order and the Duchess’s transgression through remarriage

The Duchess is a young widow with children who decides she will remarry. This is profoundly troubling to the patriarchal order in which she lives, and specifically to her brothers – one of whom is a corrupt, fornicating cardinal, while the other is her demented twin who believes he is a wolf:

he howled fearfully
Said he was a wolf, only the difference
Was, a wolf’s skin was hairy on the outside,
His on the inside. (5.2.15–18)

The Damnable Life and Death of Stubbe Peeter, a Werewolf 1590 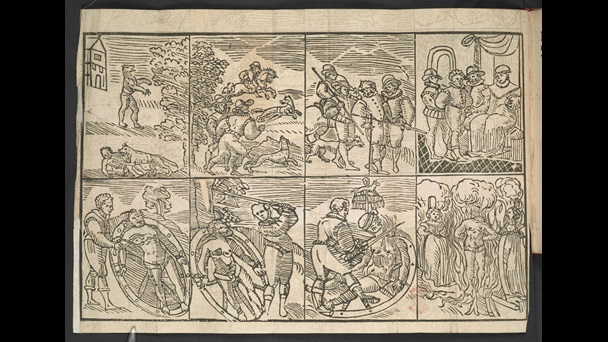 This sensationalist story of the life, trial and death of Peeter Stubbe became the foremost English language source for early modern ideas about werewolf behaviour.

She makes her choice of husband quite independently of her male relatives and wisely determines to keep secret her second marriage to her faithful steward, Antonio. The Duchess thus transgresses her society’s notion of proper female conduct both in exercising her own will in a matter of personal and sexual choice and in choosing a husband who is her social inferior. 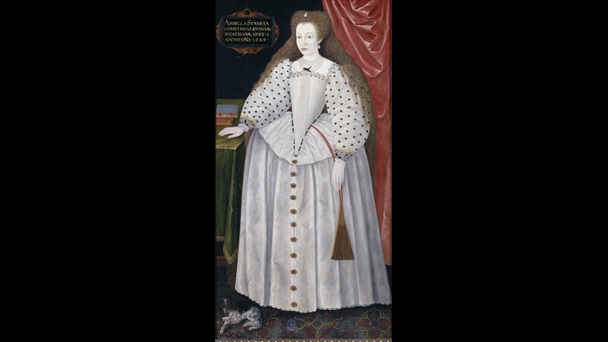 Lady Arbella’s royal blood and the ambiguity surrounding the succession left her in a state of romantic suspense throughout Elizabeth I’s reign. Like the Duchess, she entered into a secret, ill-fated marriage with a man who she loved but who was her social inferior. 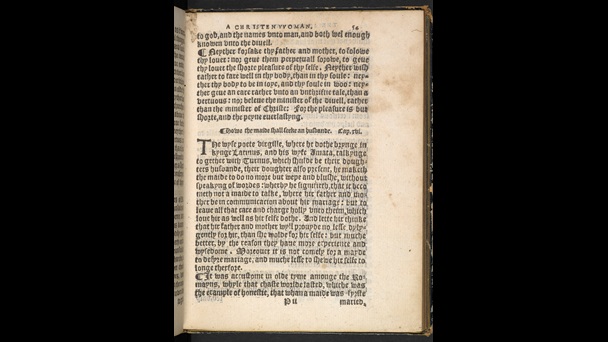 Juan Luis Vives insists that, when it comes to choosing a husband, maidens should keep quiet: ‘it becometh not a maide to talke, where hir father and mother be in communicacion about hir mariage’, 1557.

The Duchess’s brothers are the primary mouthpieces for the misogynist discourse of the era, which held that women are immoral, over-sexed, weak minded and so on. Such assumptions about female inferiority had faltered in Europe when there had been a veritable rash of female rulers: Mary of Guise had ruled as regent in Scotland, and her daughter was Mary Queen of Scots; Catherine de Medici was regent of France; and not least of all, in quick succession, there were two female queens in England, ‘Bloody Mary’ and Elizabeth I. Yet the reality of women in government was too much for the Scottish Protestant reformer, John Knox, who notoriously denounced ‘the monstrous regiment’ (government) of women as a contravention of divine law.

Portrait of Mary Queen of Scots and Lord Darnley c. 1565 Mary Queen of Scots with her second husband, Lord Darnley. In many ways Mary’s marital choices shaped her reign. 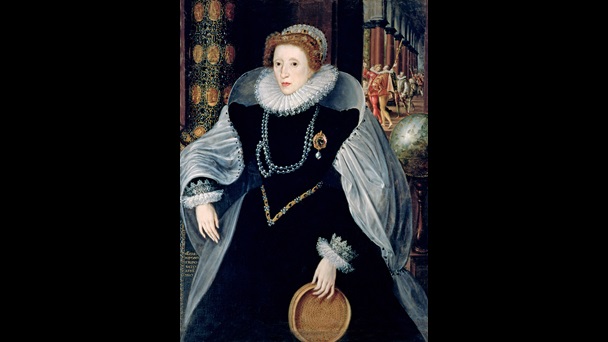 While the celibacy of priests, nuns and monks had been regarded as the highest state of life in pre-Reformation, Catholic England, Protestantism brought with it the elevation of marriage as the ideal way of living. This is reflected in the play when the Duchess asks why she, ‘Of all the other princes of the world, / Be cased up, like a holy relic?’ (3.2.139–40). She is, then, neither Catholic fetish object, nor Protestant funeral monument. In this, despite the exotic Italian setting complete with its ostensibly corrupt religion, the play comes closer than we might at first imagine to representing the lived realities of early modern English widows and the constraints upon their sexual choices. Widowed women potentially achieved autonomy from men upon the death of their husbands, and thus were in theory free to remain single or choose another spouse to their own liking. In practice, however, women sometimes suffered harassment from male relatives or neighbours, so that their best option was to seek protection from a new husband. It was not unusual for this suitor to be chosen for them. 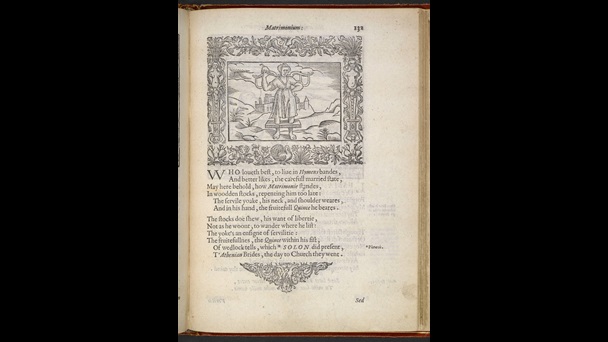 This woodcut depicts ‘Matrimonium’ (or marriage) in brutally off-putting terms. Marriage is personified as stuck in the stocks – an early modern punishment – suggesting a humiliating lack of ‘libertie’.

Despite the arrival of Protestantism, widows who did remarry to their own liking were not held in particularly high esteem. These attitudes are reflected in the literature of the period. The moral ‘frailty’ (1.2.333) of a character like Gertrude in Hamlet, for example, is attributed to the fact that she ‘speeded’ to a second husband, with whom Hamlet believes she enjoys a vigorous sex life in ‘the rank sweat of an enseamed bed’, (3.4.92) that he feels her ‘matron’s bones’ (3.4.83) should be too old for. Unlike Gertrude, who is faulted for the speed with which she has married her dead husband’s brother, Webster tell us nothing about the Duchess’s first husband, or how long he has been dead. Ferdinand warns the Duchess ‘They are most luxurious / Will wed twice’ (1.1.288–89). Coerced by her brothers into vowing ‘I’ll never marry’ (1.1.293), the young Duchess’s aside is very much in the vein of Jacobean city comedies where typically older widows successfully seek sexual satisfaction by marrying younger men: ‘Let old wives report / I winked and chose a husband’ (1.1.332–40). What Webster emphasises here, however, is the Duchess’s capacity to take action and initiative when her capacity to do so is severely restricted by her wider society and culture.

Her wicked brothers are typical of the period in condemning remarriage. They echo a cultural commonplace, recorded in Thomas Overbury’s Characters (1615). There, the ‘Ordinary Widow’ remarries because she never loved her dead husband in the first place, and she seeks sexual and material pleasure. In contrast, the ‘Virtuous Widow’ is described as ‘the palm tree, that thrives not after the supplanting of her husband... She is like the purest gold, only employed for princes’ medals, she receives but one man’s impression’. The image here is telling – that a wife, ‘pressed’ by her husband in sexual intercourse, has his identity imprinted upon her, and thus erases her own.

‘I am Duchess of Malfi still’: The Duchess as a complex heroine

That the Duchess is eventually murdered for her defiance of her brothers provides ample evidence of why her marriage was unavoidably covert. Yet male disapproval of the Duchess as a character has persisted to the point that even 21st-century editors of Webster have criticised her entirely legitimate per verba de presenti matrimonial contract (verbal and witnessed), as rash rather than heroic. In fact, Webster develops the Duchess’s character while simultaneously utilising and resisting the polarised discourses around women at the time, which presented women as either chaste paragons of virtue or lascivious whores. The Duchess’s brothers clearly place her in the latter category as a ‘lusty widow’ (1.1.331) who can be seduced by a ‘neat knave’ with a ‘smooth tale’ (1.1.330), the tale being not only verbal seduction, but also the knave’s sexual appendage, his ‘tail’/penis. But Webster takes on the challenge of representing a woman who is both virtuous and sensual, and who embodies the virtues of a sexually fulfilling married life. He does this in part by articulating what is, for the 17th century, the structural contradiction of having a woman on top: Faced by mounting pressure to accept a suitable husband – and thereby relinquish sole power – Queen Elizabeth issued this declaration in 1559.

Importantly, too, the Duchess’s motherhood is a key aspect of her character. She expresses touching maternal concern for her offspring at her death. Her clandestine pregnancies provoked rumours: ‘The common rabble do directly say / She is a strumpet’ (3.1.25–26). In order to confirm such suspicions, the malevolent malcontent, Bosola, tricks the pregnant Duchess into eating apricots, which cause her to go into labour. While Bosola is the instrument of her tragedy, after her brave and stoic death his remorse is evidence of the Duchess’s moral strength. Nowhere is this clearer than at her death, when the Duchess insists not on her chastity or on the conventional list of female virtues to which she might rightly lay claim, but on her political status: ‘I am Duchess of Malfi still’ (4.2.134). In this assertion, the Duchess shows herself to be a more radical figure than her 19th-century successors.