Women playing Shakespeare: The first female Desdemona and beyond

Hannah Manktelow charts the journey from the all-male playhouses of Shakespeare's day, to great actresses in female roles, and modern women cross-dressing to play male heroes like Hamlet.

The Restoration actress and Shakespeare

In Shakespeare’s London the playhouses were all-male, with adolescent boys playing female roles. Then, in 1642, the outbreak of Civil War led to a ban on stage plays that lasted for 18 years. The theatres were closed, and public playing largely disappeared. Women did not have the opportunity to perform professionally on the English stage until the Restoration of the English monarchy in 1660. 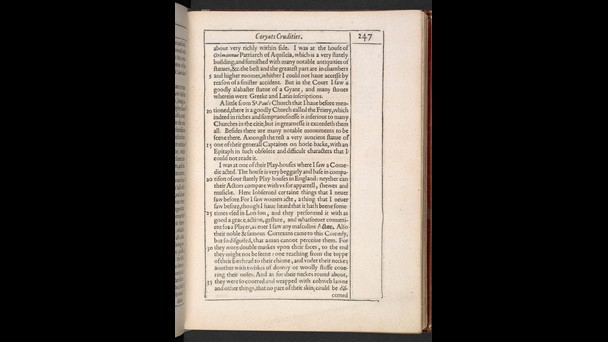 Thomas Coryate expresses surprise at seeing ‘women acte’ at playhouses in Venice – something he ‘never saw before’ in London.

When Charles II and his supporters returned to England in 1660 to restore the monarchy and take the throne, they brought with them an enthusiasm for the theatre that they had cultivated during their time in exile at the French court of King Louis XIV. In particular, they had developed an appreciation for the French professional actresses, and were keen to instil this continental tradition in the English playhouses.

The first production to feature professional female players took place on 8 December 1660, at Thomas Killigrew’s Vere Street Theatre, in a production of Shakespeare's Othello. The identity of the first woman to play Desdemona is unknown, her name unrecorded in theatrical accounts. However, research undertaken by Elizabeth Howe suggests that Anne Marshall was the most likely candidate. A talented actress, Marshall often took leading roles in Killigrew’s acting company, playing tragic and comic parts with equal merit. In 1664 she caught the eye of Samuel Pepys when he noted that she played ‘most excellently well as ever I heard woman in my life’. As with so many Restoration actresses, there is little documentary evidence of Marshall’s life, and her name only appears in association with the theatre. It is likely that she came from a respectable family fallen on hard times, as this would have equipped her with the manners and decorum required to play a lady onstage convincingly, as well as the financial motivation to enter such a disreputable profession.

Remaining chaste was almost impossible for the Restoration actresses. They were viewed primarily as sexual objects, placed in the public arena to titillate the audience: men were permitted to visit them in their dressing rooms while they changed, and costumes were designed to be as revealing as possible. Especially appealing to Restoration audiences were ‘breeches roles’, in which female characters, such as Viola in Twelfth Night, disguised themselves as men, donning tight-fitting breeches that exposed their calves and thighs. These proved so popular that theatre managers adapted many of Shakespeare’s plays to introduce more opportunities for cross-dressed or scantily clad actresses to appear.

Despite their exploitation on and off the stage, the most celebrated actresses were not entirely powerless: playwrights often created roles in order to showcase the talents of certain performers. The first generation of English actresses breathed new life into Shakespeare’s heroines, and thus secured a permanent place for female players and the works of Shakespeare in English theatre. 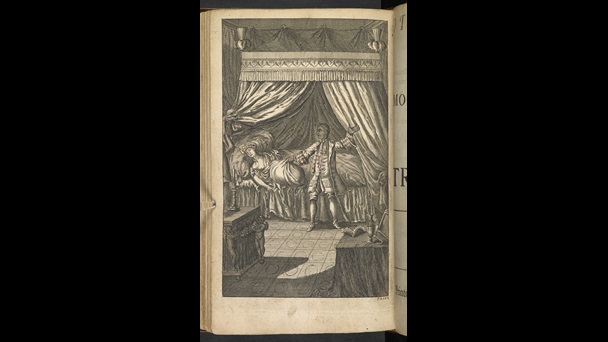 In this frontispiece for Othello, Desdemona’s exposed body suggests the sexualised way that actresses were seen at the start of the 18th century.

Shakespeare and the actress in the 18th and 19th centuries

As public interest in performers grew steadily throughout the 1700s, a select number of actresses had a powerful new commodity at their disposal – fame. The first to attract national veneration was Sarah Siddons (1755–1831). After training for years in provincial theatres, Siddons joined Drury Lane in 1782 and was a resounding success. Audiences found her naturalistic acting style refreshing and engaging, and she quickly gained popular favour. By her thirties she was widely adored by high society.

Tragedy was Siddons’s forte, and her most iconic role was Lady Macbeth. She brought a new interpretation to the part, choosing to play her as a devoted wife distorted by ambition for her husband rather than the manipulative fiend of tradition. Though forced to hide personal difficulties from the public, including a philandering husband, Siddons’s commitment to upholding her morally impeccable persona helped to rehabilitate the popular image of the actress and improved the respectability of the industry as a whole. 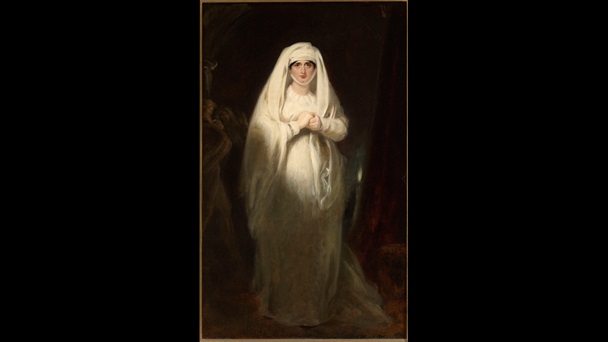 Sarah Siddons in her most iconic role as Lady Macbeth, painted by George Henry Harlow in 1814.

Following Siddons’s success, mastering Shakespeare’s heroines became ever more important to 19th-century actresses. Some even began to take on male roles in order to expand their repertoire and showcase the full extent of their abilities. Siddons had experimented with playing Hamlet on tour in the provinces, but this type of cross-gendered casting did not receive a wider audience until Charlotte Cushman (1816–1876) played Romeo at the Haymarket in 1845. Though she kept her lesbian relationships private, Cushman’s unfeminine appearance and obvious lack of interest in men freed her from the financial and sexual exploitation that had troubled so many before her, and ushered in a new era of independence for those who were willing to disregard tradition. Charlotte Cushman played Romeo, with her sister Susan as Juliet, in London in 1846.

Playbill advertising the Cushman sisters as Romeo and Juliet 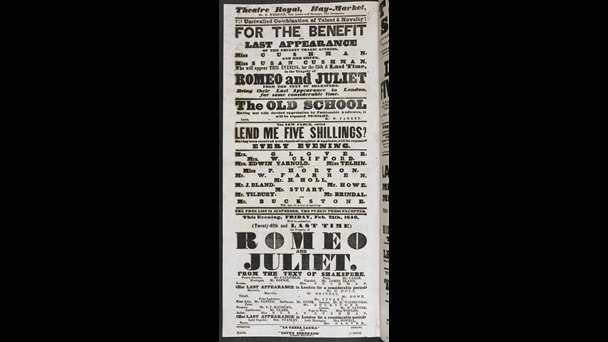 This playbill advertises the final night of sisters’ triumphant engagement at the Theatre Royal, Haymarket in 1846.

Cushman’s innovations opened the door – albeit half a century later – for one of the most influential Shakespearean actresses of all time. The Parisian Sarah Bernhardt (1844–1923) was a canny self-promoter who cultivated her image as a mysterious, exotic outsider. In 1899, she took the controversial decision to play Hamlet and was rewarded with acclaim throughout Europe and America. In stark contrast to the melancholic interpretation of English tradition, Bernhardt’s Hamlet was youthful, energetic and volatile. She claimed to be more suited to the role than any man, arguing that ‘a boy of twenty cannot understand the philosophy of Hamlet’, while the older actor ‘does not look the boy, nor has he the ready adaptability of the woman, who can combine the light carriage of youth with … mature thought’.

Postcard of Sarah Bernhardt as Hamlet in 1899 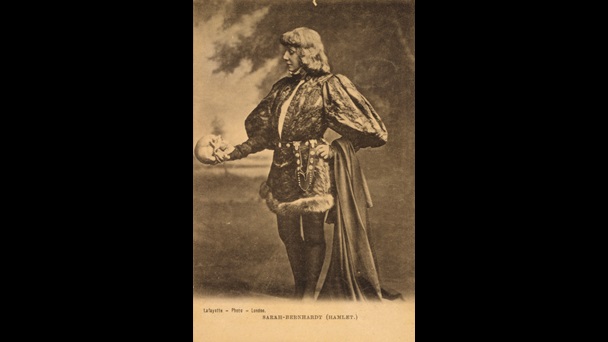 The French actress, Sarah Bernhardt, crossed gender boundaries when she played the male hero in Hamlet.

The critics, however, were not so sure. Many felt that Bernhardt and the actresses she inspired were fundamentally incapable of understanding male drives and emotions. These attitudes would persist into the 20th and 21st centuries, presenting yet further challenges to women determined to enjoy the same opportunities as their male equivalents. 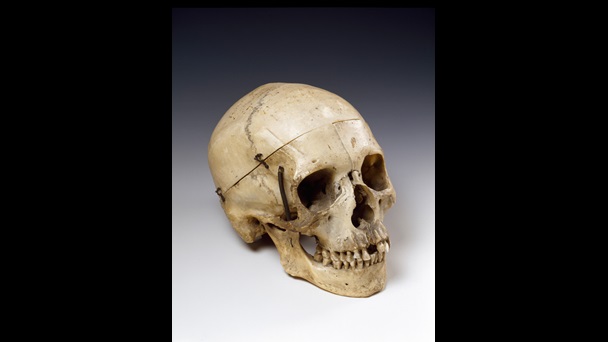 Bernhardt used this human skull for the graveyard scene in her performance as Hamlet.

Despite the achievements of Cushman and Bernhardt, Ellen Terry (1847–1928), the biggest star of the 20th century, chose to present a socially respectable and traditionally feminine public image. As the Lyceum Theatre’s leading lady she excelled in Shakespeare’s most virtuous roles: Ophelia, Cordelia, Desdemona, Portia, Beatrice and Imogen. By the age of 36 she was the highest-paid woman in Britain and a confirmed national treasure. But in order to reach such heights, Terry was obliged to exert considerable control over her public profile. She concealed the illegitimacy of her two children and allowed Henry Irving, her professional partner, to choose her roles and set her salary. In her autobiography, Terry revealed feelings of compromise and regret at some of the opportunities she had missed. 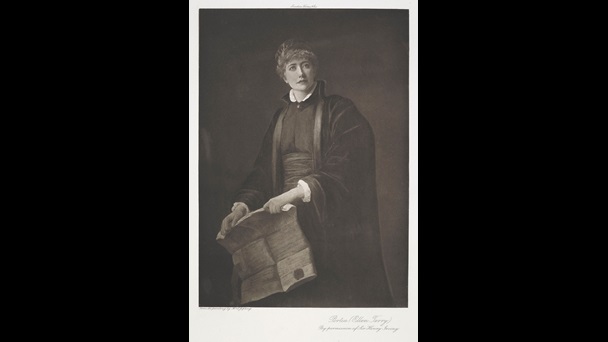 Ellen Terry was the biggest theatre star of the 20th century. Here she plays the role of Portia disguised as a male lawyer in The Merchant of Venice.

As the century progressed, more experimental productions of Shakespeare’s works arose alongside the traditional. Danish actress Asta Nielsen (1881–1972) offered one of the first gender-bending performances in her 1921 silent film Hamlet, in which she played the Prince as a girl who had been raised as a boy in order to preserve her family’s lineage. Despite its controversial premise, Hamlet was a phenomenal box-office success, allowing Nielsen’s interpretation to reach a global audience.

The possibilities that Nielsen’s Hamlet had awoken remained largely unexplored for decades, and only with Neil Bartlett’s 1991 Twelfth Night did such interpretations begin to receive serious critical attention. This production featured a number of cross-gendered characters, including Viola, Sir Toby Belch and Sir Andrew Aguecheek. In his rationale, Bartlett wrote that his decision to play with gender came from a desire to evoke the ‘bizarre beauty’ of the original performance, which would have featured boys in the roles of Viola, Olivia and Maria.

While Bartlett sought to recapture what post-Restoration casting had lost, Sarah Frankcom’s 2014 production of Hamlet at the Manchester Royal Exchange used gender recasting to bring a fresh perspective to the most popular Shakespeare play of all. The Player King, Polonius, the First Gravedigger and Rosencrantz were all played as women, while Maxine Peake’s androgynous Hamlet seemed to defy gender conventions. This approach allowed judgement of Hamlet’s masculinity to be excluded altogether, and created a reading of the play in which, as critic Michael Billington observed, ‘character … matter[ed] more than gender’, rendering the piece particularly relevant to 21st-century audiences grappling with gender equality in wider society.

The second-wave feminism of the 1960s–70s had a limited impact on Shakespearean performance as a direct result of the absence of women in positions of power within the industry. In recent years, however, there have been a number of female-dominated productions in prestigious theatres. Phyllida Lloyd’s all-female productions of Julius Caesar and Henry IV at the Donmar Warehouse in London have drawn praise for challenging power dynamics and subverting gender roles. Lloyd’s cast – consisted of women representing a variety of ethnic backgrounds, regional accents and body types – did not attempt to imitate men, but instead looked to secure legitimacy for the female voice in these highly masculine plays.

Such productions still receive negative criticism from those who believe women are incapable of playing kings and heroes, and accuse directors that dare to play with gender of tainting Shakespeare’s works in order to make cheap political points. In spite of the persistence of such outdated views, the Shakespearean canon remains as enticing to the modern actress as it did to her Restoration counterpart. And although men still hold the majority of senior roles in the theatre, greater representation will surely usher in a new era of possibility for female Shakespeareans.