Fiction and poetry in Spare Rib

Spare Rib collective member, Jill Nicholls, reflects on the significance of women’s literature during the 1970s and 80s, and recalls the process for selecting stories and poems for the magazine.

Encouraging and expressing women’s creativity was always at the heart of the Spare Rib project. During the time I was there, 1974-80, I would say that we saw making the magazine as a creative act in itself. It wasn’t a question of ‘reporting on women in the arts’ but making a magazine that was in some sense a work of art – our own and our contributors’ self-expression. So the design and feel of the magazine along with the use of women’s original cartoons, artworks and photographs were of central importance - not an add-on or decoration. We also published new fiction and poetry in every issue, as well as regularly reviewing women’s creative work (films, books, theatre, music, dance). We interviewed visual artists, writers and musicians, and ran articles on women artists of the past - Rozsika Parker and Griselda Pollock in particular wrote about art history from a feminist point of view.

I joined just as Spare Rib was changing over from having a hierarchical structure with an editor to working as a collective. We decided together, in meetings, what to publish, but we did allocate roles and there was, for example, a fiction editor and a poetry editor. They would read the many submissions and put forward a selection to the collective. If there was something strong that they didn’t personally like, they would put that up for discussion too. It was time-consuming, but not as time-consuming as the whole collective having to read everything!

This was a boom-time for women’s fiction and poetry. Virago, The Women’s Press and Onlywomen Press were just starting up, followed by Sheba Feminist Publishers. Women had so much to say. Spare Rib’s reviews played a significant role in evaluating work and getting it noticed by a wider audience, but encouraging and publishing creative writing was important too. I remember for example working with Ann Oosthuizen on her long story, ‘Bones’, about being widowed at 38. She had not been published before and we both found the collaboration very rewarding; she has since had two novels and many stories published. I wasn’t fiction editor as such  – at the time that was Alison Fell, the Scottish novelist and poet. Zoe Fairbairns (whose first novel, Benefits, would come out in 1979) edited the poetry section when I was on Spare Rib, followed by Michele Roberts, now a well-known poet and novelist. Michele says she felt honoured to be appointed as Spare Rib’s poetry editor, but found the lengthy collective discussions about choosing which poems to publish each month difficult and sometimes frustrating. 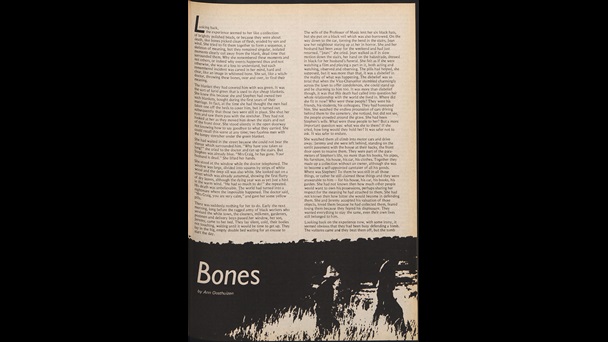 Short story about a woman’s feelings at the death of her husband. 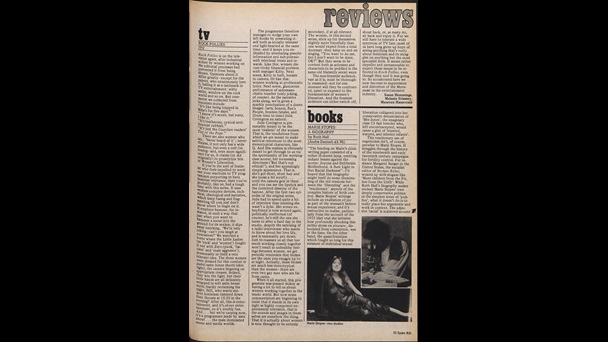 Typical review section from the late 1970s, including reviews of non-sexist children’s books.

Though many women did go on to write more, that was not the aim so much as to provide a platform for many women’s voices to be heard, in a magazine that could be read by anyone, picked up on a newsstand next to that month’s Cosmopolitan or Woman’s Own.