How did women use music to further the feminist revolution of the 1970s and 80s? Deborah Withers, co-founder of the Women’s Liberation Music Archive, explores sexism in the music business and shows how feminists countered this through their music and through feminist music journalism.

Imagine a time when the usual role for women in the music industry was as a genteel backing singer or a pretty dancing girl. When the idea of a woman picking up an electric guitar, sitting behind a drum kit or working the PA system was not only a novelty, but perceived as threatening to male musicians and wider society.

This was the situation when Spare Rib began in 1972. The magazine was a platform for much needed debate about the sexism, stereotyping and exclusion that affected women music makers in the early 1970s and beyond. Music and feminism intersected within Spare Rib in several ways: features exploring the experiences of professional female musicians trying to make it in a 'man's world'; interviews with commercial artists such as Joan Armatrading, Sheena Easton and Tracy Chapman, and others; reviews of gigs, albums and singles and, finally, by exploring the role of grassroots music within the Women’s Liberation Movement (WLM). 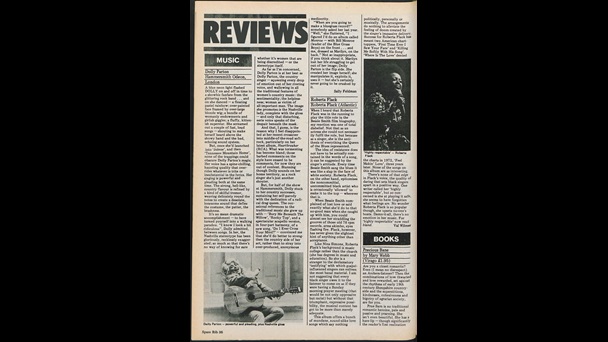 The emergence of feminist music journalism that treated women as musicians, rather than as a titillating marketing gimmick, was very important. Even today the moniker 'female-fronted' or 'all-girl band' is used to surprise and entice audiences, which suggests that women continue to be judged by the music press on their gender, rather than musical abilities.

Spare Rib offered intelligent critiques of music industry sexism which prevented women from achieving success. In a feature on Joan Armatrading from issue 23, the artist is introduced with this knowing caveat: 'You haven't heard of her before? Ah well there's no glitter you see, no glamour. She doesn't offer the music press a sensational angle, and as we know too well, their appetite mysteriously wanes when a woman refuses to compromise her sexuality'. 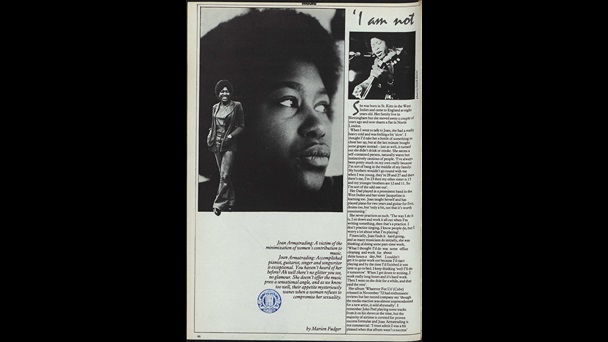 Success in the pop charts was often treated with scepticism by Spare Rib reviewers. Commenting on Kate Bush's widely celebrated debut album, The Kick Inside, Pam Isherwood wrote: 'A passing thought–could this child/ woman style be what was attractive to the male power structure that creates air play and chart success?’ Barbed critique was never far away, demonstrating that sisterly solidarity was not automatically extended to all women musicians: 'Roberta Flack [...] epitomises the noncommittal, uncommitted Black artist who is occasionally ’allowed’ to make it to the top - wherever that is', Val Wilmer wrote.

The emergence of punk in the late 1970s signalled major change for women in music. The ethos of punk was that anyone could form a band, perform and write their own songs, even if they had no skill or prior experience of doing so.

The punk experience is communicated in Spare Rib through features and reviews written by Lucy Toothpaste. The Rock Against Sexism organiser and author of Drastic Measures zine was a prolific contributor to Spare Rib during the late 1970s and early 1980s. Toothpaste wrote with the passion of a fan, propelled by punk's freedom to say what she wanted, interviewing bands, reviewing records and sharing her experience of punk feminist liberation. 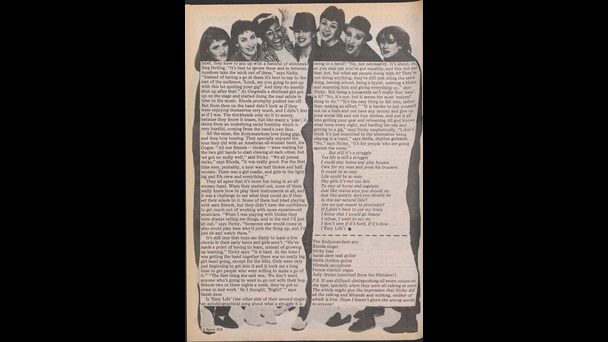 Feature about The Bodysnatchers, all-women feminist band from the early 1980s.

Yet some feminists saw punk music and culture as aggressive and patriarchal. In an interview with Siouxsie & the Banshees from issue 83, readers may have been shocked to learn about how the 'kids at the front' of punk gigs tore 'seats apart to make space to pogo - passing the debris over their heads to the stage'. 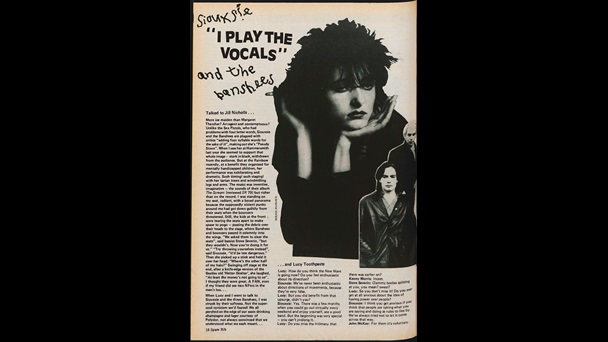 Usage terms Issue 83, pp 16-18, Siouxsie and the Banshees, by Lucy Toothpaste and Jill Nicholls; photographs by Mark Rusher
Usage terms: We have been unable to locate the copyright holder for these items. Please contact copyright@bl.uk with any information you have regarding these items.

Music and the Women’s Liberation Movement

The tone of WLM socials was more 'bopping' than frenzied pogo-ing. A pressing issue in the movement was exploring how bands could write and perform music in non-sexist, feminist ways. A 1976 feature on the Stepney Sisters posed the question: 'Feminism and Rock Music. Can they be combined?' indicating how feminist critiques extended aesthetic matters. 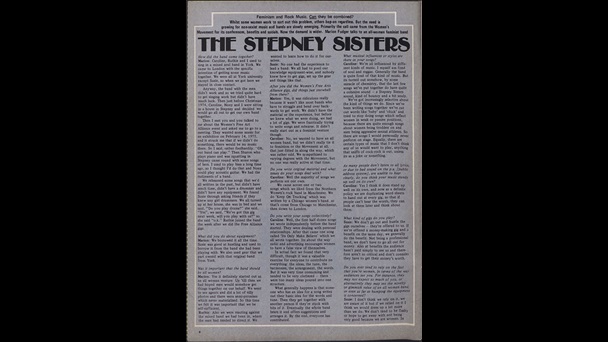 Usage terms Issue 46 pp 6-8, The Stepney Sisters by Marion Fudger.
Usage terms: © (now) Marion Gilbert Creative Commons Non-Commercial Licence Photographs by Angela Stewart-Park.
Usage terms: We have been unable to locate the copyright holder for these items. Please contact copyright@bl.uk with any information you have regarding this item.

Spare Rib's pages are a fascinating place to explore the role of music within the WLM, as women used music as a tool to further the feminist revolution.

Music making was very much embedded in the culture of the WLM. In its most ideal form music was the means to both express and practise a different cultural reality where women were autonomous, and certainly not 'under the thumb' of male power.

In the world of pop, performers are idealized as superstars, in turn they look down on and manipulate their audience. Out of the movement we hope that a new type of relationship is developing in which there is no alienation between group and audience. We don't want to be performers, we are really only women from the movement: the movement has created us and the music we make.

What feminist music sounded like, and how music was to be played in a feminist way, was the subject of ongoing debate within the WLM. It resulted, however, in diverse music being created in and around the movement. Spare Rib's report of the Women Live festival, a co-ordinated series of events which took place across the UK in May 1982, showcases this range of feminist musical culture.

Mentioned are dance troupe Sheer Ebony, the 15-piece Lydia D'Ustebyn swing orchestra, Newcastle-based barber shop quartet parody Friggin Little Bits, reggae band Amazulu, improvisors such as Irene Schweizer, Lindsay Cooper and Maggie Nicols, as well as many others. In typically reserved fashion the headline reads: 'It was a fun month, for sure with lots of nice things to do and see but also a few mistakes. And was it just a month long flash in the pan or has it really changed things?' How far things have changed for women in music, from grassroots to professional levels, remains a pertinent question.

Spare Rib enables us to trace the continuity of exclusion and stereotyping which continue to afflict women who play music today. It also provides useful critical vocabularies that can be re-mobilised in the ongoing feminist struggle to transform culture. Perhaps most importantly, in Spare Rib we encounter a breathtaking range of female musicians marginalised within dominant accounts of popular music history.