Race, place and class: who’s speaking for who?

I was the first Irish woman to join the Spare Rib collective in September 1980. I was not hired because I was Irish – the conscious effort to diversify the collective membership had yet to take place. Nevertheless, at the job interview I was asked how I would deal with the various campaigning groups involved with Irish issues (Troops Out, Women in Ireland, Women Against Imperialism). This illustrated the political tensions existing between the collective and feminist groups outside the magazine. And I often felt caught between the different demands being made on me by both the groups and by the collective. Over the three years I worked on the collective, I was often puzzled by the fact that although we were all women and all feminists, how difficult it was for us to negotiate our differences, let alone recognise them. Some collective members were upper class and wealthy; distanced from the reality of post colonialism on the island next door. For instance, during a collective discussion on Northern Ireland, one member exclaimed, ‘I don’t know how any woman can support nationalism’. 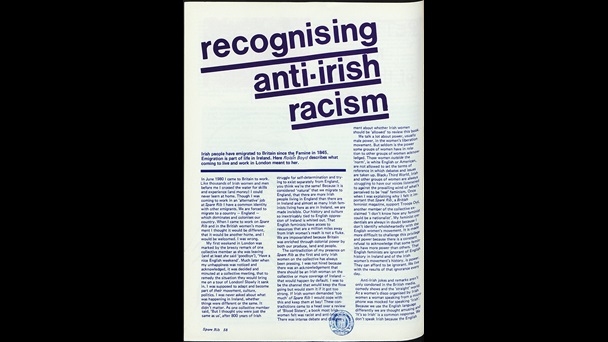 Article about racism experienced by Irish people living in England.

My lived experience as an Irish emigrant was hard for me to define at the time. It conflicted with different aspects of my identity which were highlighted by the conflict in Northern Ireland and the drama of the hunger strikers. Yes, I was a committed feminist who had left family and a new relationship behind to work on Spare Rib. But I was also Irish and this Irish identity was more intense and in focus while living in London. Bobby Sands MP may have been a man on hunger strike but his and the other nine hunger strikers’ long, drawn-out starvation provoked huge contradictory emotions for me as an Irish feminist living away from Ireland, as the issue convulsed the country North and South. 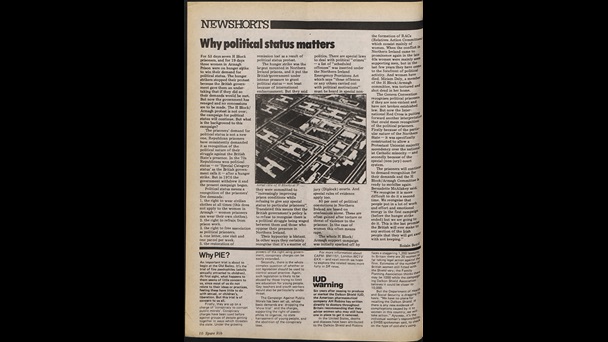 Article about women prisoners on hunger strike in Armagh prison.

Women too were imprisoned and on hunger strike in Armagh prison. In one Spare Rib issue in 1980, three women’s groups in Northern Ireland outlined their different perspectives on Republicanism. These ranged from those who believed that women involved in anti-imperialist struggle would never return to traditional women’s roles to those who believed all armed groups in the North, including their women members were part of the ‘armed partriarchy’.

I too felt conflicted about Irish nationalism but I believed that as feminists we could not ignore it. We needed to listen to the voices of women who linked political resistance in Northern Ireland to the struggles in Chile and El Salvador, women like Mary Nellis living in Derry. 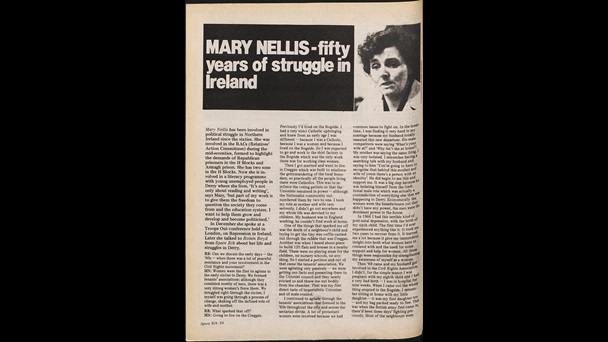 Article about campaigner Mary Nellis about her struggles in Northern Ireland.

Usage terms Issue 128 , pp 24, 25, Mary Nellis – fifty years of struggle in Ireland by Roisin Boyd
Usage terms: © Roisin Boyd Creative Commons Non-Commercial Licence Photographs of Mary Nellis by Derek Speirs
Usage terms: We have been unable to locate the copyright holder for these photographs. Please contact copyright@bl.uk with any information you have regarding these.

These were very difficult times in Ireland and Britain – the horrific consequences of political and state violence causing death, repression and huge anguish amongst Black and white, ‘a revolutionary anger’ . 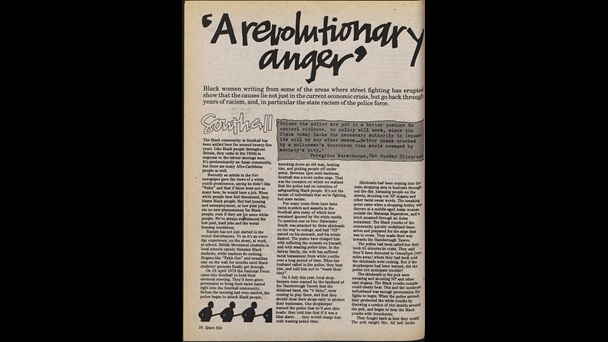 Feature about racism and the riots occurring across Britain in 1981.

Spare Rib was famous in Ireland because of its banning by the Censorship of Publications Board in 1977, followed by a strong feminist campaign to overturn the ban. Feminists from the Republic went to the North and brought copies back, selling them on the streets and holding a mass meeting in Dublin’s Mansion House where they sold the magazines in defiance of the authorities. Ironically, and illustrating the confusing way the British Left and feminist movement sometimes respond to Irish politics, a former member of the collective was reported to have remarked that they did not wish to be seen to be imposing any sort of ‘British cultural imperialism’ and that ‘we don’t want to be thought of as foisting something essentially alien on Irish people if they don’t want it.’

Even writing this now through a lens of more than 30 years, the potency of the discussions we had in the collective reverberates. Some separatist and/or radical feminists, inside Spare Rib and outside, believed that the magazine should cover only issues directly related to women and interview only feminists about them. For example, there were protests when I interviewed Irish socialist and republican political activist Bernadette McAliskey and put her picture on the cover. Interestingly she said she had only come to recognition of her oppression as a woman after that of being a Catholic and working class. ‘You have to start where you are and women in the North of Ireland are fighting for survival, not against the day-to-day oppression of themselves as women but for their survival as human beings.’

It has been many years since I worked on the collective, but recalling my experience for this essay has been difficult – the agony, the intensity, the arguments and the passion. Sometimes the closer you are the more painful the differences can be, as in a family. Maybe our expectations were too high – we expected a lot of each other politically and personally and the disappointment was great when those expectations were dashed. But... there were also deep friendships and satisfying and enjoyable encounters. I feel privileged to have met women like Rada Gungaloo, a feminist from Mauritius who was studying law in London. I met her when she dropped into the office one day wanting Spare Rib to highlight the situation in Diego Garcia. This island in the South Pacific had been cleared of its inhabitants by the British government to create a US military base; eight women went on hunger strike to protest the loss of their homes. 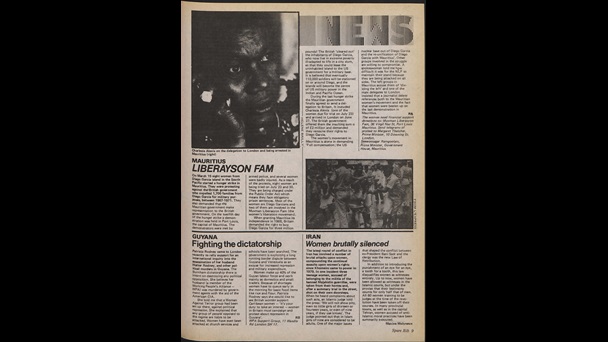 News page showing women’s struggles for peace and freedom around the world.

Although the magazine worked collectively there were different ways of viewing issues important to women. 8th March is International Women’s Day and in 1983 in issue 128 I wrote about what international solidarity might mean in practice and what Spare Rib’s role should be.

Who should write about ‘other’ women’s struggles particularly those taking place in Third World or colonised countries?...Some feminists believe that although they don’t have direct experience of being, say a woman living in a Third World country, they can – by virtue of their own political commitment to those struggles, and perhaps their own experiences in those countries – write and explain themselves what is taking place. Other feminists, and I count myself among them, believe that as far as possible it is the women who are taking part in particular struggles who should – at last – have their voices heard.

What we had in common often got lost in bitter political battles when ‘the personal’ became confused with ‘the political’. The question of what was a feminist issue and who should speak those issues was hotly debated at feminist meetings and on the pages of the magazine. Who was the ‘we’ of the Women’s Movement? Who was included and who was excluded? Who held power? Usage terms Issue 18 pp 15, 16 A weight off my head; P 15 photograph of Karen Durbin; P 16 photograph of hairstyles.
Usage terms: We have been unable to locate the copyright holder for these items. Please contact copyright@bl.uk with any information you have regarding these items.

Who should speak for who was an ongoing discussion in all areas of the magazine. In the letters page in issue 91, Janice Zoots wrote:

In Lonely Among the Feminists (SR 132) an Iranian member of the Spare Rib collective (she did not want her name published because she was in political exile during Khomeini’s rule) wrote:

Of all the racist oppression that I have suffered as a result of the ideological/cultural apartheid in this country, none has been so painful as those inflicted by white feminists...I have survived the Shah’s government, Khomeini’s men, and British institutions; I am intending to survive the racism of feminists too. At a price – yes!

And yet there are other, better memories as well. I remember working late into the night with Louise Williamson, one of the first working class woman on the collective and Farzaneh, an Iranian woman, both of whom joined Spare Rib shortly after I did, getting the magazine ready for the printers and eating Indian take away from Exmouth Market. We felt a huge excitement and a sense of achievement. Many women would write to say that Spare Rib was their lifeline – keeping them going in difficult circumstances or in isolated areas.

What struck me looking through the back issues of Spare Rib is the depth of feeling, the honesty, the passion and the diversity. What appears unusual, in hindsight, is the public airing of our ‘dirty laundry’! Going public with the difficulties we were experiencing as the collective and the magazine changed: the ruptures. I was literally caught in the middle when the collective split between women of colour and the white North American and English members. I didn’t belong in either ‘camp’ but was close to both! An editorial in issue 127 put it clearly:

Dear Reader, One of the ongoing discussions in our collective has been on racism. We would like your participation in this debate so that we can develop a dialogue. Our discussions have been long and painful and have not ended in any conclusions [...] ‘Do definitions matter? What questions have to be asked? What is Black? What is white?[...] How do we fight oppression and create solidarity?

This editorial took a long time to write – writing collectively is a laborious process particularly on such a difficult topic – but the questions it poses are still pertinent today. Editorial outlining the collective’s perspective about ongoing discussions about racism.

In ‘Recognising Anti-Irish Racism’ in issue 133 I wrote hopefully about privilege and power and the possibility of change on Spare Rib:

I realise that as a white woman I have privileges and power that women of colour don’t have but our common experience of being marginalised [...] by the dominant white English culture has created some solidarity between us [...] the women’s liberation movement is open to change and the changes that have taken place on Spare Rib have been dramatic.

More articles on Representation and identity