The limitations of identity politics

What feminism? Whose feminism? In this article, black lesbian activist Linda Bellos recounts her experiences on the Spare Rib collective and critiques the notion of a ‘hierarchy of oppressions’.

Feminists had never been a strictly homogeneous entity with common experiences, struggles and aims but it is fair to say that the perspective of white educated feminists dominated the first decade of the Women’s Liberation Movement (WLM). By the beginning of the 1980s this position was being actively challenged. Working class women, black women, disabled women, Jewish women, younger, older and lesbian women began to speak out and organise themselves to challenge their own form of oppression. Some saw this as the playing out of the proliferation of identity politics and this led to great splits and rifts among feminists and within the Spare Rib collective itself. ‘It isn’t enough for white British feminists to work out the ways in which they individually oppress Black people,’ stated an editorial in 1982 introducing a three part series focussed on issues of race, racism and feminism. ‘Oppression does not spring merely from individual acts and attitudes. White feminists need to understand much more about how racism is structured into the whole of British society. 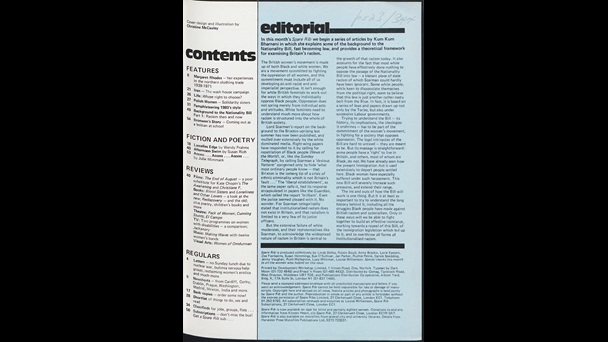 Editorial introducing a series of articles about racism in Britain.

Usage terms Issue 115 pp 49- 52, Racist Acts by Kum Kum Bhavnani
Usage Terms: © Kum-Kum Bhavnani Creative Commons Non-Commercial Licence. Photographs: Racism and Seamen in Liverpool, by Picture Post; Nasira Begum by John Smith
Usage terms: We have been unable to locate the copyright holder for these items. Please contact copyright@bl.uk with any information you have regarding these items. 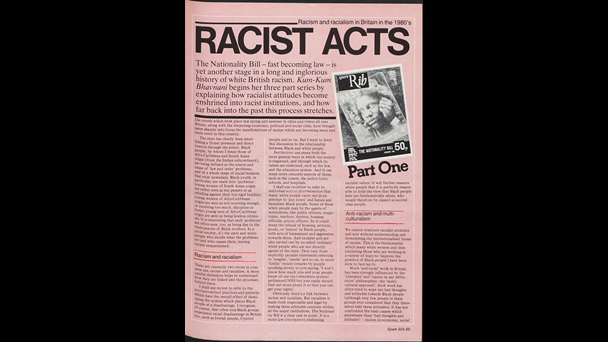 Article about racism and racialism in Britain in the 1980s.

Usage terms Issue 115 pp 49- 52, Racist Acts by Kum Kum Bhavnani
Usage Terms: © Kum-Kum Bhavnani Creative Commons Non-Commercial Licence. Photographs: Racism and Seamen in Liverpool, by Picture Post; Nasira Begum by John Smith
Usage terms: We have been unable to locate the copyright holder for these items. Please contact copyright@bl.uk with any information you have regarding these items.

Political activist Linda Bellos, a former Spare Rib collective member, reflects on the politics of identity during her years at Spare Rib:

My first job as a graduate in 1981 was at Spare Rib as a part-time finance worker - prior to going to university I had spent five years working for the Inland Revenue. I was not a member of the Spare Rib collective when I started but as the months progressed I found it impossible not to be drawn into discussions about the magazine. Eventually I was asked to join the Collective.

At the time, I was the first and only Black member of the staff. I found myself commenting, sometimes critically, at the absence of content relating to working class women, Black women, lesbians and disabled women. It wasn’t that the magazine never contained material about these groups of women but it always seemed to be marginal, as though the main focus of the magazine was for White middle-class women.

I raised these concerns at the time and most women on the collective understood or partially understood what I was getting at. For me being Black was not a special issue, and neither was being Irish or being working–class. What was problematic was the way the Women’s Liberation Movement, and also at Spare Rib, identity was understood as part of a hierarchy of oppression. I recall being described as ‘doubly’ or ‘triply oppressed’, as were many other women of colour. The more boxes ofoppression a person ticked the more visible they became but this didn’t necessarily mean they were heard or listened to. Worse, identified as oppressed in different ways, these people became the recipients of others' pity. I recall being disgusted by the term ‘multiple victim’, especially when it was applied to me, since I have never felt or claimed to be a victim of any kind even though I have, like most women, been subject to discrimination.

I was still working at Spare Rib when I began to formulate a critique of this hierarchy. I had no problem with the idea of identity politics but I was concerned about the growing enmities and misunderstandings that developed between groups of women who appeared to be in competition about who was the most oppressed. I reflected on these ideas in a paper for the first Black Feminist conference called ‘We are Here’. I noted how Spare Rib and the WLM welcomed African American Black women’s voices - people like Audre Lourde, June Jordan, Barbara Smith, Angela Jackson who were rightly applauded and deserved to be read. Nevertheless, it seemed to me that there was less willingness to hear from Black British women as being an integral part of the Movement and equal to White women.

One of my main areas of frustration in working at Spare Rib was what I perceived to be a tendency for White and middle-class women to speak on behalf of women of different classes and ethnicities. I started rejecting offers of articles by women travelling to say, Nicaragua or India on holiday who insisted that their perspective about other women’s experiences would be good to hear. I felt it was really important that African, Latino and Asian women speak for themselves in voices unmediated by White middle-class tourists.

I still think identity politics has grown into a form of competitive victimhood which to my mind is neither healthy nor even feminist. Spare Rib at the time I worked for it and before did not fully understand or embrace the notion of equality between women and I am not convinced that the latest manifestation of feminism does either. But I hope that I am wrong.

More articles on Representation and identity