How was each issue of Spare Rib designed and produced? Who was involved in that process? What equipment did they use? Pat Kahn gets down to the nitty-gritty of production and, using the magazine lexicon of the day, talks letraset, Cow Gum, layouts and pasteup.

This is a message in a bottle, to whoever you are, whenever you’re reading. I’d like to talk about what you can’t see on the pages: who designed the magazine and how we did it.

London was very different in the 1970s. So was politics. Our generation are now in our 60s. Thinking back summons detail that is both half- and mis-remembered. Succinctly describing ‘then’ and ‘now’ is tricky; past and present are interdependent. Remember that, dear reader.

I was briefly Spare Rib’s designer in its second year, after the founder-designer Kate Hepburn had left, and then continued as one of many women who worked on design and production. What lasts in my memory is the community of helpers organised and nurtured by Laura (Margolis) Wilson and then Lorie (Epstein) Karlin who succeeded each other as the magazine’s designers in the mid-70s to the early 80s. Design and pasteup were done by a slowly-evolving group of volunteers – but I don’t think we called ourselves that. Some women had work experience, others were recently out of art school or new to the then arcane practice of print production. For most of us, it was early in our working lives, but we didn’t talk of careers – though many of us continued to work for campaigning or non-commercial organisations as staff or freelancers.

The politics that Spare Rib was part of was what would now be called our ‘passion’ – but we didn’t say that then either. We were committed to changing the world and our lives. We didn’t foresee the long reign of Thatcherism and neoliberalism. To still be arguing for (for example) equal pay 40 years later is incredible. Campaigns and concerns were of-the-period in a way we could only appreciate later. In the women’s movement and at the magazine, there were endless meetings. 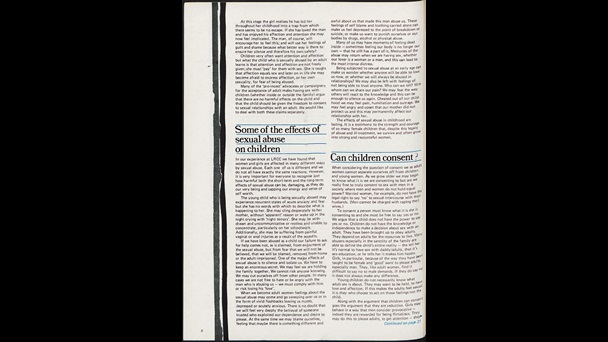 Magazines were much less image-driven than they would be in 2015. These two pages of a feature on child abuse and another on women in El Salvador show that the breadth of Spare Rib content was often wider than critiques of the women's movement credit.

Those of us who helped out with design were a somewhat autonomous group. We worked at a long bench at the side of the large room in Clerkenwell where Spare Rib moved in the late 70s; fairly companionably, as I remember, as discussions and arguments from the main collective in the central space wafted over to us. The imperatives of getting layouts ready for print was and is a structuring discipline. There was considerable camaraderie.

The practice of print production has changed utterly. Today everything is on the screen in front of you, visible and easily tweaked, in a form that can mask the network of people and processes involved. Then only scientists used computers. Writing, editing, design and pasteup were separate, sequential processes. We stepped away from established hierarchies and job definitions of print and publishing – that was part of the politics of the time, in the women's movement and elsewhere. Almost everyone on the magazine was interested in both content and its visual form, but we developed particular partnerships over time, learning from each other in relationships based on compatibility as well as skills.

Spare Rib provided regularly provided readers with information about health and reproduction from a woman’s perspective. This article re-evaluates the merits of the cervical cap and looking at the politics of sexuality and birth control. Pat Kahn, the typographer for Spare Rib in 1981 remembers working with colleagues Sue O'Sullivan and Amanda Sebestyen to make text-heavy 'unillustratable' articles on sex and medical matters pleasant to read.

Ruthie Petrie’s ‘A day in the life’ describes production. And there’s a wealth of material online; try searching for ‘typesetting before computers’ for example.

The design process involved both pre-planning and the ability to conjure last-minute fixes. Typesetting and turning images into printable bromides had to be done elsewhere, by specialist outfits – both commercial firms and other collectives – whose services we paid for. We had to write down all the instructions that are now part of word processing and design software before things were sent off, and make corrections after assembly and proofreading had been done to minimise the time and cost of sending things away again.

Artwork was black and white with everything at the right size; anything to be printed in a second colour had to be on an overlay or indicated for separation. We began by marking up copy, using a conventional shorthand on typewritten pages which were sent away to be set, returning in long galleys. Headlines were specified in the same way, or hand-lettered, or made with Letraset, sheets of rub-down letters. We wrote sizing instructions for photos and illustrations on tracing paper overlays; these were also sent away. When typesetting and visuals were ready, we made facing-page spreads by pasting up the components on cardboard grids with Cow Gum, a viscous, solvent-smelling glue. Galleys were proofread, and then the layouts. Last-minute finalising could be fiddly and tense because corrections were stripped in by hand, with a (surgical) scalpel – line-by-line, sometimes letter-by-letter.

Some C words: collaboration and context

Photographers and illustrators not only supplied images, many had broader involvement, developing material with the collective. Laura convened several meetings about representations of women for anyone interested, as elsewhere feminist artists, filmmakers, writers and campaigners debated current issues. An important pasteup task was to add illustration credits: many women worked for free, and it was important that they be named and recognised. Acknowledgment is often missing in today’s digital cut-and-paste, and needs reinstatement.

In the 70s we didn’t talk about branding; though Spare Rib had a logo there wasn’t a narrow house style. Inside pages were distributed among the design team. The eclectic look reflects the animated engagement across the movement, and is also affected by the processes and materials involved. The pages now seem surprisingly word-heavy, especially considering how much we thought about visual material. There was a lot we wanted to say.

Covers were somewhat separate, especially in the early years – they had to compete on the newsstands with other magazines, and were often fiercely debated. Decisions were made by the whole collective with the lead designer. 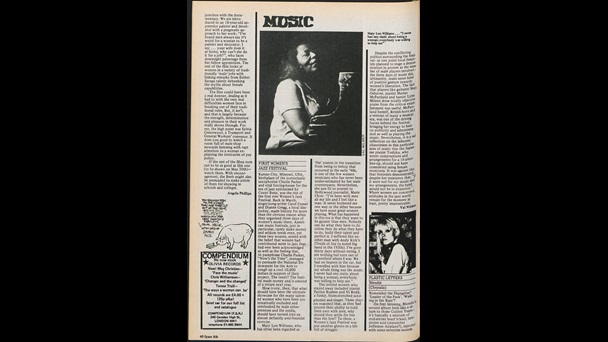 Aside from feature articles Spare Rib was packed with other content including reviews, letters, news and listings. They are often evocative of the period and the processes involved – in this instance simple graphic devices, terrible reproduction of photos but Mary Lou Williams, Blondie and Patti Smith!

The magazine has a family resemblance to the punchy get-stuck-in-ness of the late 60s alternative press and on to grrrl zines of the 80s and 90s. And there were many other activist groups who produced publications during Spare Rib’s existence; discussed the distribution of alternative, non-commercial, political publications; set up typesetting and print cooperatives; campaigned around equality and social policy issues. There was a feeling in the air. May its present manifestations continue.

A big thank-you to Lorie and Sue Hobbs, designers I met then and with whom I became friends and continued to work, for helping me remember. Many names came up, but any omission – certain for everyone who worked after this period – seemed less satisfactory than a general salutation.