Victory brought questions about the nature of the American state, including the relationship between individual colonies and national government. These and other issues, particularly slavery, remained fissures within the new body politic

The Revolutionary Wars left the colonies in a wretched state. For many Americans, the war brought hardship and suffering even if they were not fighting; more died of disease than from enemy fire. 60,000 Loyalists left the United States. Many settled in Canada, while others had their property confiscated. Popular protest within the States, such as Shay’s Rebellion (1786) against high taxes in Massachusetts, also challenged the old colonial power structures, demanding wider property ownership and more political representation.

These conflicts also took place at the federal level, as the second Continental Congress (1775-1781) and Confederation Congress (1781-1788), wrestled with the question of how the new nation should be governed and what powers the individual states should retain. Fearful of replicating the ‘tyranny’ of centralized authority represented by British colonial rule, the initial Articles of Confederation (ratified 1781) enshrined the sovereignty of individual states.

Lacking the means to enforce its decisions, national government soon broke down, and the Constitutional Convention, which met in 1788 at Philadelphia, chose to replace the Articles with the Constitution of the United States. The Constitutional Convention favoured a strong, national government over a loose federation of states. The constitution was guided by the Enlightenment principle of a separation of powers, with the presidency, congress and supreme court provided with their own areas of responsibility, but able to restrain the other branches of government.

Fearful of the concentration of power and influence of the larger states, Antifederalists successfully campaigned for ten amendments to the constitution, known as the Bill of Rights and which guaranteed basic freedoms such as of speech and worship (the 'First Amendment') and the right to a ‘speedy and public trial’ (the 'Sixth Amendment').

Finally, slavery played an important role in the debate on the balance of power between the smaller states and the larger, southern ones. Enslaved black population were counted proportional as three fifths of state population to determine number of representatives and also counted as property for tax purposes. Abolition of the importation of slaves was barred until 1808.

The Constitutions of the United States (London, 1782) 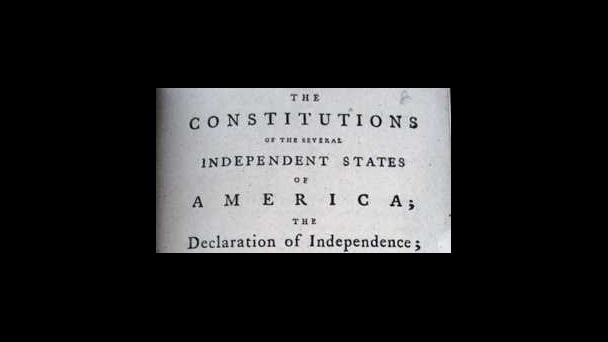 Alexander Hamilton, The Federalist: a collection of essays written in favour of the new constitution (New York, 1788) 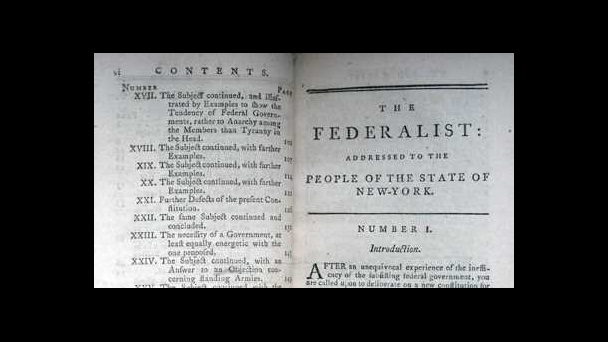