Inside the walls: exploring medieval towns

Medieval towns were vibrant hubs of activity, housing an array of people from political and spiritual leaders to traders, craftsmen, inn-keepers and brothel owners. Here, Dr Alixe Bovey explores what went on inside city walls.

Medieval writers were unsure about towns. On the one hand, they saw them as vital hubs of economic, cultural, political, administrative and spiritual activity. But on the other, they saw their many dangerous temptations: their taverns and alehouses, gambling dens and brothels. Towns could also be dirty, expensive and riddled with disease. In the 1190s, Richard Devizes wrote of London: 'whatever evil or malicious thing that can be found in any part of the world, you will find it in that one city'. However, at around the same time, William FitzStephen praised it as a place of thrilling spectacles, admirable devotion, and exciting pastimes, including skating and football. 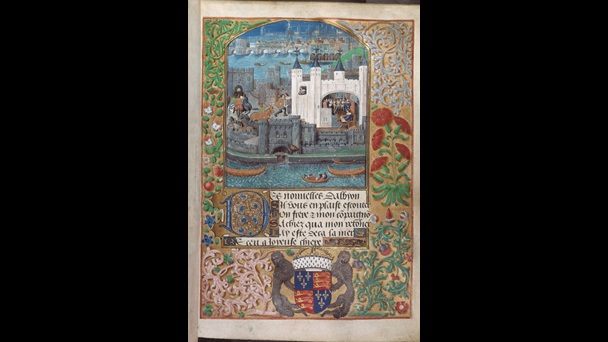 An illustration of the view of the Tower of London and London Bridge, from a volume of Charles d'Orleans' Poetry (Royal MS 16 F II, f. 73r)

Normally enclosed by protective walls, access to medieval towns was regulated through gates. The Luttrell Psalter includes an image of Constantinople that is based on an English town: surrounded with a curtain wall punctuated with towers and arrow slits, the city is crowded with buildings. At the centre is the tall spire of a church. 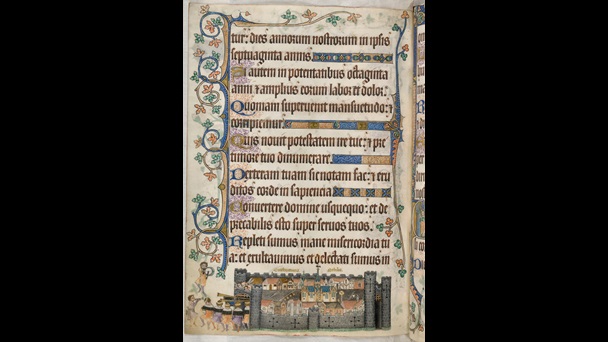 A representation of the city of Constantinople, from the Luttrell Psalter (Add MS 42130, f. 164v)

The glamour of the town is suggested by the dancers emerging from one of its gates, watched by admiring ladies. Successful towns were often sited on major roads or waterways, facilitating trade and transport. Bridges were important points of access to towns, and were often themselves embellished with chapels and buildings. 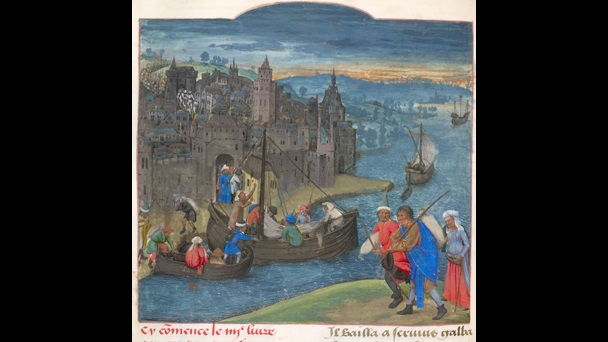 An illustration of boats leaving a city by night, from a volume of Caesar's Commentaries translated into French by Jean Duchesne (Egerton MS 1065, f. 116v) 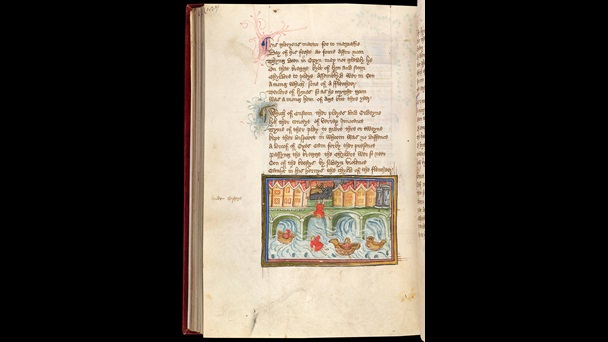 An image of a child falling from London Bridge, from an illustrated copy of John Lydgate's Lives of Saints Edmund and Fremund (Yates Thompson MS 47, f. 94v)

London: the largest city in England

Around 1300, the majority of people in Europe lived in the countryside. In England, between 10 and 20 percent of the population lived in towns. Around this time, London's population is estimated to have been 60–80,000. Although unimpressive by today's standards (medieval London was something like one percent of today's population), this made it the largest city in England. After the Black Death in 1348–50, which killed a third or more of the population, the pace of change quickened. Some towns shrank while others grew rapidly as many peasants relocated to urban centres.

Who lived in towns? At the top of the social scale were merchants, lawyers and property owners, who occupied responsible administrative positions. Below them were craftsmen and traders, and at the bottom of the pile were relatively unskilled workers. Then, as now, towns included a mixture of residential and commercial properties, though often these were one and the same: craftsmen's workshops were often on the ground floor, with the family residence upstairs. In many towns, medieval commercial activities have left their mark in streets with names like Shoe Lane, Pie Corner and Apothecary Street. Medieval commercial buildings are relatively rare, but images can sometimes offer a record of what they might have looked like, as seen in the illustration of an apothecary shop in a 13th century French manuscript. 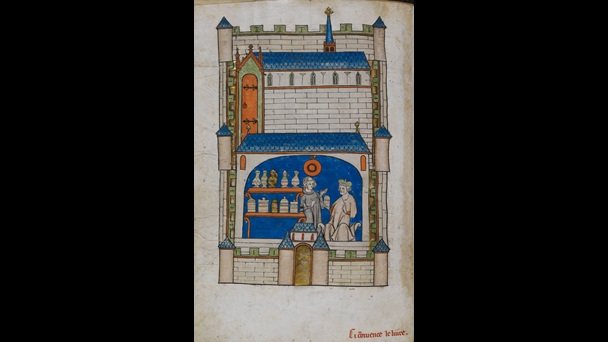 An illustration of an apothecary shop, from Mattheus Platearius' Circa instans (Sloane MS 1977, f. 49v)

Religious houses, parish churches and other religious foundations were an important feature of the townscape, and from the 13th century, mendicant friars – whose mission was to preach to the people rather than to live cloistered lives – became central to the spirituality practiced in towns.

Bible of William of Devon An illustration of mendicant friars standing on columns, from the Bible of William of Devon (Royal MS 1 D I, f. 1r)