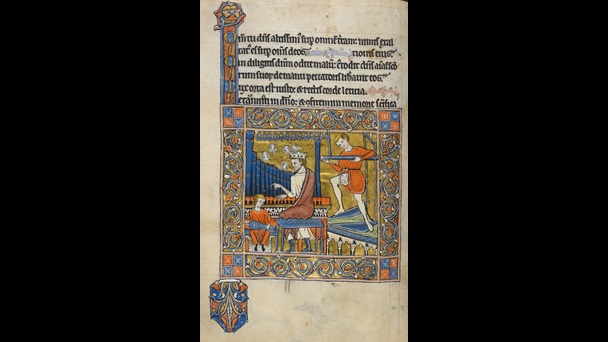 A representation of King David playing the organ, accompanied by youths with bellows and hurdy gurdy before Psalm 97, from the Rutland Psalter (Add MS 62925, f. 97v)

Art, music and literature blossomed in the Middle Ages, producing some of the most important works of Western civilisation.

Compared to today, few people were able to read and write. Those who could were mainly church men (and, to a lesser extent, women), who read and composed works (mostly in Latin) ranging from commentaries on the Bible, philosophy, history, and the saints, to romances, ghost stories, and bawdy tales of misadventure.

However, as an ever-more wealthy, literate and largely urban population developed in the high and later Middle Ages, so too did the audience for sophisticated writings. People read (or listened) for entertainment as well as education. A growing number of rich and aristocratic patrons had an appetite for many kinds of writing: books told of the exotic adventures of noblemen and women; of ancient battles and love stories; of the crimes of sinners and villains, and of the deeds of saints and heroes. This growing interest in literature is also reflected in the emergence of vernacular texts - texts written in Italian, French, English and so on - especially from the 1100s onwards. Whereas Latin writing was produced by and for a largely clerical audience, this new literature was accessible to a broader public. 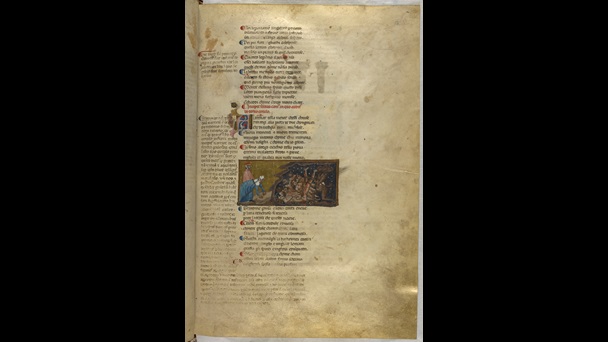 Virgil and Dante encounter the three-headed Cerberus in Hell, in an illustration from a 14th-century copy of Dante's Divine Comedy (Egerton MS 943, f. 12r) 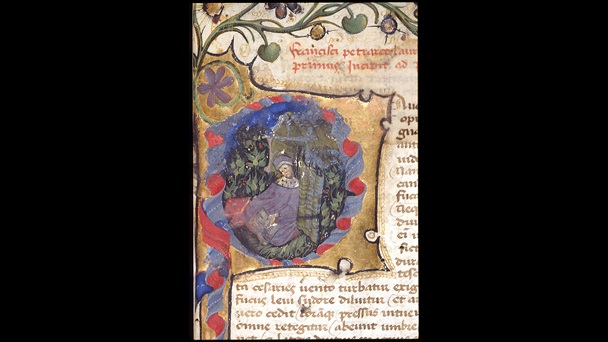 An historiated initial P, containing a portrait of Petrarch seated in a garden reading a book, from a copy of his Opuscula Varia (Harley MS 3454, f. 1r) 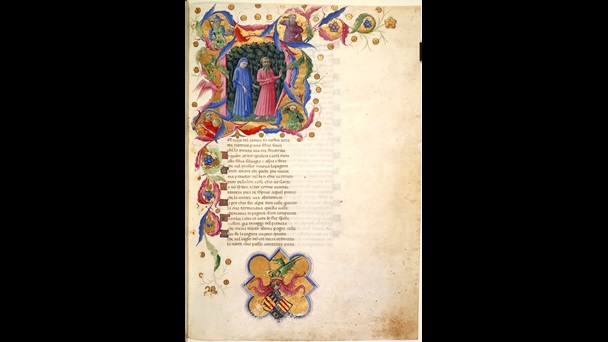 An historiated initial N, containing a representation of Dante and Virgil in a dark wood, from an illustrated copy of Dante's Divine Comedy (Yates Thompson MS 36, f. 1r)

Thomas Hoccleve, The Regiment of Princes 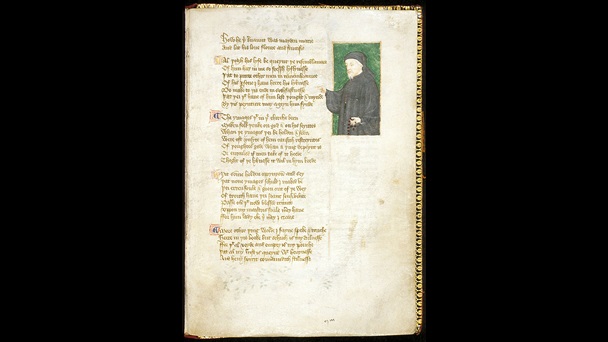 Medieval literary culture was as much about listening as it was about reading. Many English works begin by instructing the audience to listen, showing that the writer assumed that the text would be read aloud. In the popular romance Guy of Warwick, the audience is told to ‘herken to mi romaunce rede.’ Illuminations in many manuscripts show groups of people – often noble in status and in a courtly setting – listening to (or sometimes ignoring) a reader.

Music was a major part of secular and spiritual culture in the Middle Ages. The development of music and its notation – that is, the way it was written down – can be seen in many manuscript sources.

The most famous example of medieval song in English is the rota, or round, ‘Sumer is icumen in’, illustrated in the manuscript below. This composition is from a volume of mid-13th century manuscripts, which probably originated from Reading Abbey. The piece requires four singers to sing the same melody, one after the other, starting when the previous singer reaches the red cross on the first line. While this is happening, two lower voices repeat the words ‘Sing cuccu’. Instructions on how to perform the song are given in the bottom right hand corner of the page.

'Sumer is icumen in' Manuscripts also contain many images of music being performed, showing not only musicians and musical instruments, but also the range of settings in which music was performed, including religious observances such as the Divine Office (the daily cycle of prayers performed by monks), funerals, and also secular settings such as banquets, balls, tournaments and fairs.

Hours of René of Anjou An illustration of the Office of the Dead, from the Hours of René of Anjou (Egerton MS 1070, f. 54v) Common medieval instruments included the harp, the lute, the bagpipe, the hurdy-gurdy, the psaltery and the lyre.

A representation of King David playing the organ, accompanied by youths with bellows and hurdy gurdy before Psalm 97, from the Rutland Psalter (Add MS 62925, f. 97v) 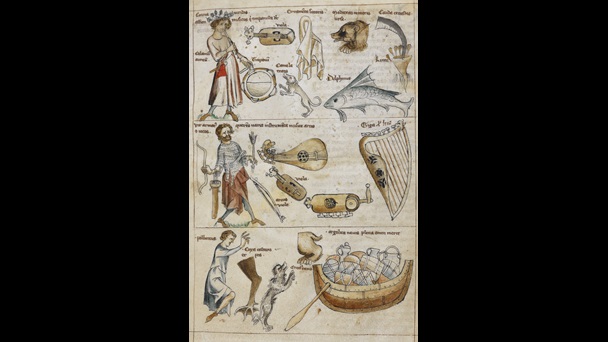 Instruments including a harp, a viola, a lute, and a hurdy gurdy, represented in an illustrated copy of Albumazar'sTreatise on astrology (Sloane MS 3983, f. 13r)

Minstrels, who sang songs telling of romantic characters and faraway places, were commonly found entertaining wealthy aristocratic households but also performed in the streets of some prosperous towns. Their songs were often accompanied by acrobatic skills, tricks or jesting. Medical practitioners believed that music had powerful restorative qualities: it was believed to alleviate melancholy, aid the healing of wounds, and even to heal paralysis. Some images show evidence of negative attitudes to secular music, such as a tiny satirical marginal image in a Book of Hours showing a friar holding a pair of bellows like a fiddle and scraping out a tune with a distaff while a barefooted nun, who has hitched up her habit and flung her arms in the air, does a rude dance. A marginal illustration of a friar with a musical instrument and a woman dancing, from the Maastricht Hours (Stowe MS 17, f. 38r) A line-drawing of St Pachomius receiving Easter Tables from an angel, from the Eadui Psalter (Arundel MS 155, f. 9v)

By the 13th century, this had begun to change: professional illuminators, often located in towns and cities, began to take over. One such illuminator was William de Brailes, who included an image of himself in the Book of Hours below painted c. 1240. These professional book producers were able to respond to a growing demand for books by people outside of religious contexts, including students and lay people. An historiated initial C, containing a representation of the illuminator William de Brailes as a tonsured man at prayer, from the De Brailes Hours (Add MS 49999, f. 43r)

Images in manuscripts relate to their written texts in a number of ways: sometimes, they represent the author, owner, donor or patron; in other instances, they are used to articulate the text, making it easier for readers to find their way around the book; and often the images comment on the text in some way, sometimes acting as a visual commentary on its content or on the circumstances in which it was produced, or in which it might be used. Images are not necessarily less important than the text in medieval manuscripts: sometimes they take priority over word, or stand alone without text, as for example, a focus for prayer and meditation. In many instances, especially in the later Middle Ages, marginal images were often humorous or even rude, perhaps intended to distract readers from the text with playful imagery.