Hawaiian Historian Noelani Arista looks at another side of the story of Cook’s landing in Hawai’i, discussing how Hawaiians might have interpreted his arrival and how his death has since been depicted.

Discovery and Resolution, the names of the ships which bore James Cook to Hawaiian shores, were also values of the age that propelled such voyages into the Pacific. However ‘discovery’ as it has been rhetorically scripted by historians, has often been a one-sided tale.

In the case of Hawaiʻi, discovery was not undertaken with intention, but achieved through chance. Perhaps we should finally consider from this vantage point in the 21st century what was ‘discovered’ and what remained beyond the comprehension and aptitude of these transient haole (foreigners) who produced Hawaiʻi and Hawaiians as objects of knowledge in their journals, correspondence, reports, sketches, and material objects collected.

James Cook and his crews were the first haole to visit the Hawaiian archipelago when they arrived on the island of Kauaʻi on 18 January 1778. In the first few days of encounter with Hawaiians, a warrior by the name of Kapupuʻu took some iron from the ship by force, as he had planned to, and was shot and killed. Later that evening, perhaps as a show of force, shots were heard coming from the ship and a display of fireworks was seen. Hawaiians hearing and seeing these activities thought it might be Lonomakua, an akua, or deity, who is a keeper of fire, and they sought war with him.

Kamakahelei, the chiefly mother of Kaumualiʻi, encouraged them to appease the akua rather than engage with him, sending her own granddaughter ‘as a woman’ for Cook, or ‘Lono’ as he was called. In this version of Cookʻs visit, drawn from sources recorded in the Hawaiian language, we have evidence of Hawaiian deliberation, planning and decision-making – something often missing in English language accounts, which lack access to the ‘reason’ and reasons behind native thoughts and actions, native beliefs and ceremonial practice.

After Kauaʻi, where crews were astonished to meet Hawaiian women who freely traded sexual favors for what they desired – iron – the men of Cook’s ships returned to the task of seeking a passage north that would facilitate a growing commerce between the Pacific and Atlantic Oceans in Britain’s favour. Frustrated by these efforts, Cook and company came back to the islands and made visit to Maui later that year.

From Maui the ships sailed on to Hawaiʻi island.

The following epigraph is a written record of what Hawaiians on Hawaiʻi island heard when they encountered James Cook and his men after they sailed into ke ao Hawaiʻi (the Hawaiian world).

The first string of words are onomatopoetic, incomprehensible, yes, but also the sound of nonsense, of gibberish. The final string of word phrases beginning with aloha are examples of amusing, awkward attempts at language. While Cook and his men might have resembled Lonomakua due to the fireworks shot from ships and the smoke that emitted from the mouths of Cook and his crew as they smoked, they also sounded little better than children when they attempted to speak ʻōlelo Hawaiʻi (in the Hawaiian language).

As newcomers to Ke Ao Hawaiʻi, ‘discoverers’ were also novices – and there is perhaps no better example of their failure to communicate effectively, than the actions that resulted in the death of James Cook. So many words have been written and published about Cook and Hawaiʻi, that it seems ironic that the most indelible marks left on the islands and Hawaiian people are the myth-conceptions about kānaka maoli (Hawaiian people) and our islands that were born out of the endless scriptings and ruminations of this first encounter.

Piecing together the stories

Hawaiian experts maintained moʻolelo (stories and histories) orally, in memories trained for retention – which is why the best evidence supplied about these encounters with Cook and his people are those that are ‘ear-witnessed’, as opposed to those which writers prioritised which were ‘eye-witnessed’.

It was not until 1838 that Hawaiian accounts of Cookʻs visit were collected, edited and published by curious American missionaries of the American Board of Commissioners for Foreign Missions, who had settled in the islands in 1820. The book Ka Moʻoʻolelo Hawaiʻi, in which these accounts were published, was a production of several already-learned Hawaiians, including some prominent Hawaiian chiefly advisers who were attending the missionʻs seminary, Lahainaluna.

At the behest of their missionary teacher, the Rev. Sheldon Dibble, who found it ‘quite objectionable, that the scholars [Hawaiian men at the seminary], whilst they were becoming acquainted with other nations, should remain to a great degree in ignorance of their own’, attempted to ‘collect the main facts of Hawaiian History.’[2]

To this end, Dibble taught the first research seminar on Hawaiian history, instructing his students in how to gather oral history, record their findings, develop historical essays which they would submit and perform before the class for discussion. Later Dibble would synthesise and edit the essays and the result was the first book published ma ka ʻōlelo Hawaiʻi (in the Hawaiian language) on ‘Hawaiian History’ in the islands. Of the book’s 32 sections, three were dedicated to James Cook’s various arrivals and what people made of their interactions with him on Kauaʻi, Maui, and at Kealakekua, Hawaiʻi, where he was killed and his iwi (bones) retained. 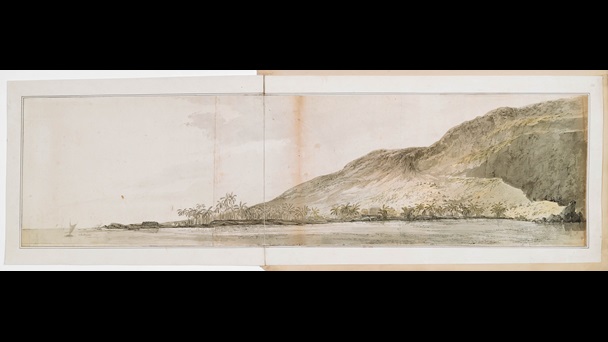 This watercolour by John Webber depicts Kealakekua Bay, on the west coast of Hawai‘i.

After Cook’s death, words and pages proliferated about his life, his accomplishments, the voyages. And if this were not sufficient, an emergent Euro-American imaginary produced larger than life images of the Captain. If one might venture to ask 'How haole think about Captain Cook and Hawai’i', the painting The Apotheosis of Captain Cook[3] – with Cook looking into the ocean ascending to heaven, directed aloft gently by Britannia and fame – gives us an idea.

Hawai’i is the background for his transfiguration – so too in the Grand Serious Pantomime of Captain Cook, a ballet that originated in Paris and spread to the London stage, captivating audiences ‘upwards of 500 nights’ at Covent Garden. From 1793 to 1820 the pantomime appeared on American stages in New York City, Charleston, Philadelphia, Baltimore and Boston. During these years Euro-Americans were transfixed by the scene of Captain Cook’s death in a wordless pantomime that sought to exhibit for an Atlantic audience the tragedy that had unfolded on a far-removed Hawaiian shore, some two decades before.

The Apotheosis of Captain Cook, which was the set piece around which the popular British pantomime Omai, or a trip around the world, concluded, played no part in the Pantomime of Captain Cook. Rather than ending with the image of a transfigured Cook ascending to the heavens, Part III of the pantomime took place at a morai (burying place) and dramatised the interment of Cook’s body in sacred Hawaiian ground.

An inscribed pole is brought by marines and set at the center of the tomb, To the memory of Captain James Cook, 14th February 1779. Instead of the British flag marking their visit, the tomb marker and bones of Cook mark out a British claim to the lately-discovered islands.

The ‘natives’ pay homage to the grave by leaving ‘presents’ of bananas, coconuts and a hog, while curious ‘long perches to which sculpted figures of human heads are fastened, one above another, declining gradually in size, as a reversed pyramid’ are placed at each corner of the tomb.[4]

The 1789 Covent Garden programme of The Death of Captain Cook ended with the islanders mournfully dancing, ‘in the manner of their country’, as the Resolution fires a salute[5]. The play underwent a revision before the Hull performance of 1790, when the pantomime ended with what would, over the next two centuries, become the other stereotypical icon of Hawaiʻi in addition to dancing hula girls: the erupting volcano[6].

Hawai’i beyond the foreign fantasies

The view from Hawaiʻi in the 21st century has to contend with haole fantasies made of the reified stuff of discovery and paradise. Each tour package and ‘experience’ touts the ability of newcomers to ‘discover’ Hawaiʻi anew, to enjoy a lūʻau (a Hawaiian feast), feted Cook-like, as is seemingly depicted in the image of him in Offering Beforre Cook / Ceremony at Hawaiʻi.[7] 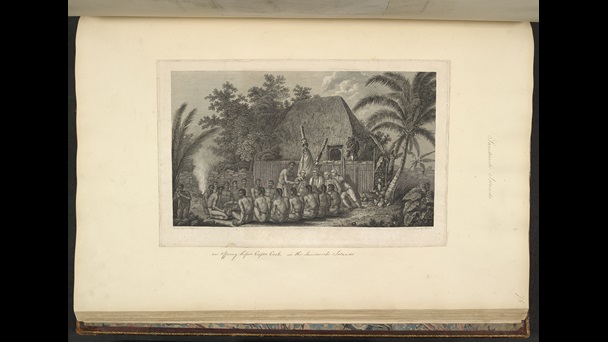 Indeed because scholars for so long believed that Hawaiian ‘time’ was inaugurated by Cookʻs arrival in the islands – since it was the written and published journals of Cook and his officers that first inscribed Hawaiian lives into the English language historical record – many still believe that kānaka maoli are a people who lack a history written in their native tongue.

As a kānaka maoli historian working in the largest indigenous language textual source base in Native North America and the Polynesian Pacific, it is clear that moʻolelo existed and were passed on orally centuries before Cookʻs arrival and the introduction of the printing press.

Perhaps there is a way we can find our way back through this history, if only we are capable of understanding and interpreting the words that were composed on the page and left for us ma ka ʻōlelo Hawaiʻi.

[2] Sheldon Dibble, The History of the Sandwich Islands Mission, Lahainaluna, Press of the Mission Seminary, 1843, iii.

[3] John Webber and Philippe Jacques de Loutherbourg, The Apotheosis of Captain Cook, 1794. Etching from a design of P.J. de Loutherbourg, the view of Karakakooa Bay is from a drawing by John Webber (the last he made) in the collection of Mr G. Baker. http://nla.gov.au/nla.pic-an7678295-1 (accessed 15 November 2009).

[7] The Hawaiian word for lūʻau is a 19th-century invention for feast or party, derived from the word for the leafy taro tops that were a popular vegetable food cooked in imu, or underground ovens. What Cook took part in was a ceremony rather than a party.