Bridget Reweti offers her personal perspective on how James Cook and his crew renamed the landscapes they encountered on their first voyage.

Lieutenant James Cook made three journeys to Aotearoa, known also as New Zealand. During his first journey, the HMS Endeavour arrived at Kaiti Beach in 1769 and left from Rangitoto ki te Tonga in 1770.

Cook’s chart of New Zealand is a map of the Endeavour’s journey around the coast of Aotearoa New Zealand, and features renamed mountains, islands, inlets, bays and straits. These landmarks were, of course, already known and named by the hapū [1]  and iwi [2] Māori that not only lived there at that time but continue to do so today. Although Cook’s chart of New Zealand is a historical document, many of the renamed natural features are still in contemporary use. 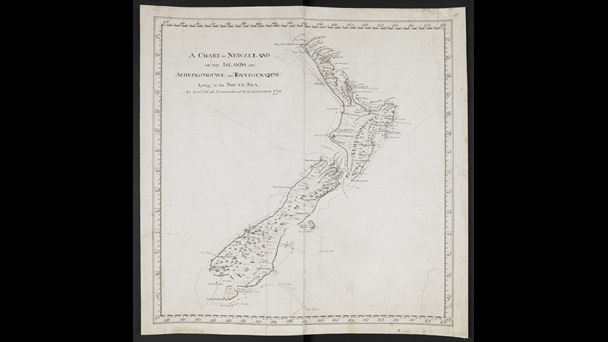 Cook’s chart of New Zealand shows the course of the Endeavour as the ship circumnavigated the North Island and then the South Island.

The name ‘New Zealand’ was attached to the islands a century before Cook’s arrival, when Dutch cartographers renamed it after a region in the Netherlands called Zeeland. Abel Tasman, who was the first European to see the islands – though did not set foot on them – initially renamed it Staten Landt, on the assumption it was connected to Staten Island, Argentina.

I only know one person who has been to Zeeland, she sent a postcard from Zeeland to New Zealand. At the time I was humoured and surprised to find out such a place existed. The postcard stayed on my fridge until I couldn’t stand the constant reminder that my land was renamed after an irrelevant place by people who never even visited. I threw that stupid postcard in the rubbish bin.

In 1769, the HMS Endeavour was the second European vessel to shelter within Aotearoa New Zealand waters. Apart from some highly inventive names gifted by Abel Tasman such as Murderer’s Bay, all landmark features from source to sea would have only had Māori names, and with them, associated narratives. These oral narratives would have described historical events, explained the naming of places and shed light on the people who lived in or used the area.

Cook’s chart of New Zealand has a few Māori names recorded, but the majority of landmarks are Cook’s own coinages.

While he gave insightful names such as ‘Flat Island’ to Mōtiti and ‘White Island’ to the active stratovolcano island of Whakaari, many of his names smothered the original ones, layering irrelevant meanings from a distant country onto a landscape already known and named. It is difficult to reconcile such a steadfast practice of disregarding Māori knowledge.

For Cook and the Endeavour crew, both geographical occurrences such as shape or colour, and even events back home seemed like legitimate factors for developing new names. Some of Cook’s most astute renamed features are ‘Snowy Mountains’, ‘Sandy Bay’, ‘Rocks Point’ and ‘Woody Head’. However, just off the coast of Tauranga is the island I know as Tuhua, which when Cook sighted it, renamed it ‘The Mayor’ as it was a few days before Lord Mayor’s Day.

Amongst the sprinkling of Māori names on Cook's chart is Mowtohara, an obvious written and geographical record to the island still known as Moutohora. Interestingly, this shows there were conversations with Māori about place-names and these names were then recorded. These conversations were most likely happening through Tahitian navigator and arioi, Tupaia.

Tupaia boarded the Endeavour in Tahiti and can be attributed to saving the lives of those on board the ship numerous times through his ability to converse with Māori. His diplomatic skill in smoothing situations, where the crew had at times shot or wounded local Māori, proved invaluable. Tensions remained high throughout the Endeavour’s course around our islands but news of Tupaia’s status travelled across the land, enabling relationships to improve enough for the ship to collect fresh water and trade goods.

In recognition of Tupaia’s importance, Māori gifted valuable possessions to him and shared personal narratives. No doubt amongst these were descriptions of place-names and their significance. Whether these names were passed on or merely disregarded by Cook is uncertain. However, the chart does document a Māori name for each of the large islands: Aeheinomouwe for Te Ika a Maui, or ‘the North Island’, and Tovypoenammu for Te Wai Pounamu, or ingeniously, ‘the South Island’.

Recently Ngāi Tahu, an iwi from Te Wai Pounamu, publicly launched Kā Huru Manu, a cultural mapping project complete with an online atlas that includes over 1,000 customary place-names. It was developed from years of researching both written and oral accounts of the landscape, from songs to narratives to family manuscripts.

The atlas contains not only names but information about travel routes, original camp sites and reserves. Ngāi Tahu have contributed their time and resources to uncovering the names and places that were concealed in the renaming process that started with Abel Tasman and continued more broadly by James Cook and  subsequent European settlers.

Cook’s chart of New Zealand is a pivotal document that highlights the beginning of a continued disregard for the Māori names and narratives unique to Aotearoa New Zealand. Yet despite an introduced system that sought otherwise, sustained retention of Māori names, narratives and knowledge continues to not only survive today but to grow.