The Admiralty's search for the Northwest Passage

In the first half of the 19th century the search for a Northwest Passage moved further north in the Arctic regions and became a scientific and geographical venture largely promoted by John Barrow, Second Secretary of the Admiralty from 1804 to 1845. Barrow was also prompted by his belief, expressed in an anonymous article in the Quarterly Review of October 1817, that Russian exploration posed a threat to British North America.

A chronological history of voyages into the Arctic Regions 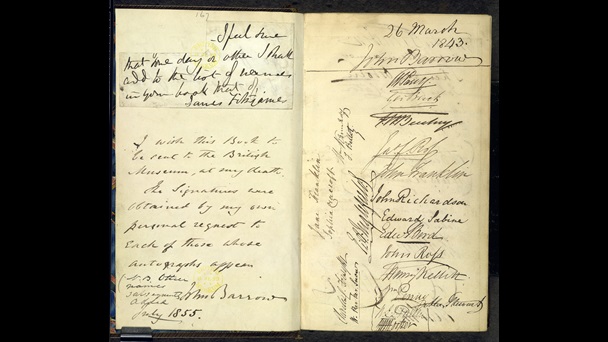 The signatures of Arctic explorers including McClintock, Franklin, Parry, Back, Penny, Ross, McClure, Rae, and Young. They were collected by John Barrow's son.

In 1818 ships of the British Navy under the command of John Ross sailed to Baffin Bay and Lancaster Sound but did not go further because Ross believed the Sound was only a small inlet enclosed by mountains. In this Ross was mistaken, and undeservedly (such mistakes are all too easy to make in the Arctic) suffered ridicule when his error became known. In the following year Edward Parry, who had sailed with Ross, led an expedition westward along the sound as far as Melville Island where his ships wintered, winning the Admiralty award for passing 110º west meridian.

A Voyage of Discovery, made…for the purpose of exploring Baffin's Bay, and enquiring into the possibility of a North-West Passage 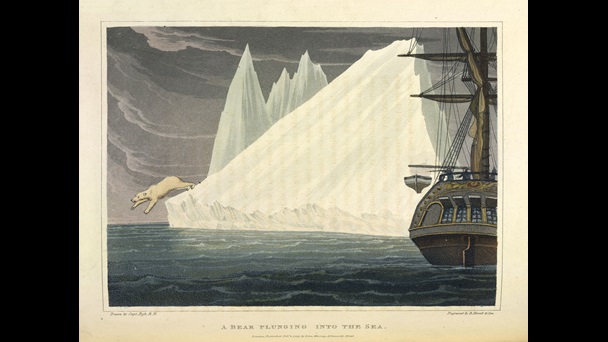 An illustration by Captain (later Sir) John Ross of a polar bear. 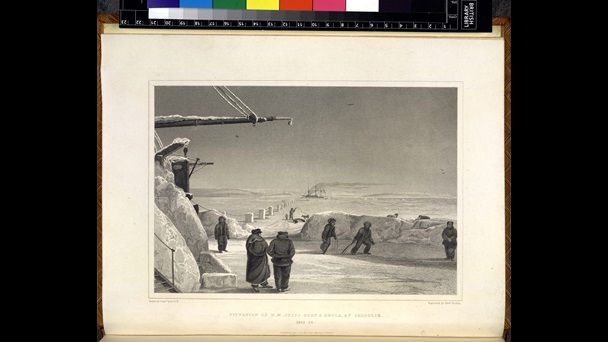 This is an illustration of Edward Parry's crew playing cricket at Igloolik in northern Canada. Parry wintered there during his 1821-23 expedition.

Franklin's 1819-22 expedition explored the north coast of America eastward from the mouth of the Coppermine River, verifying Hearne's discovery of the Arctic coast in 1770-72. At Turnagain Point they turned back because of short provisions and the approach of winter, and had an epic struggle overland on the return journey. During this trek, an Iroquois member of the party killed Midshipman Robert Hood, before being killed in turn by Franklin's second-in-command, Dr John Richardson. About 10 men died of starvation before help came from the local population.

Narrative of a Journey to the Shores of the Polar Sea 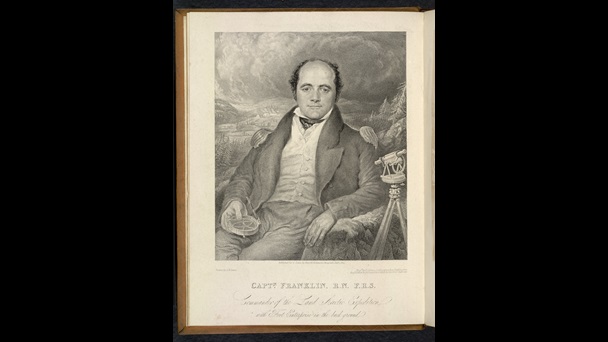 Franklin's 1825-27 expedition was much better organised than that of 1819-22. On this occasion he explored the north coast of America westward from the Mackenzie River delta. He was due to meet Frederick Beechey in the Blossom, who sailed around Cape Horn and through the Pacific to Bering Strait, but had to turn back within 160 miles of a boat from the Blossom sent to meet Franklin. Otherwise the expedition (which included John Richardson's eastwards exploration from the Mackenzie) successfully charted an area comprising half the Arctic coast of Canada and a large stretch of the Alaskan seaboard.

George Back, who was with Franklin on his two land expeditions, went in 1833-35 to look for John Ross, whose 1829-33 expedition was long overdue. Back went overland and explored the Great Fish (Back) River. After news reached him that Ross had returned to England, Back continued to explore the Back River, making the difficult descent and extensively exploring the sea coast. 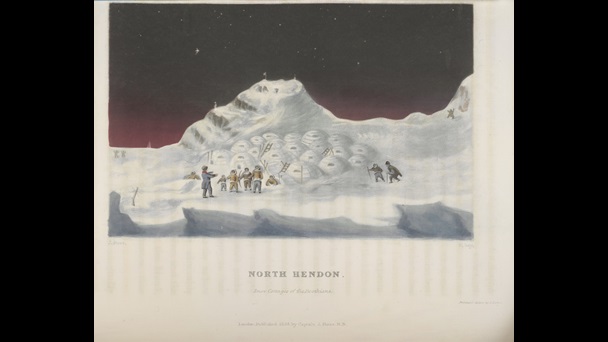 John Ross drew this illustration of the Inuit and their igloos at North Hendon on Boothia Peninsula, which he discovered in 1829. 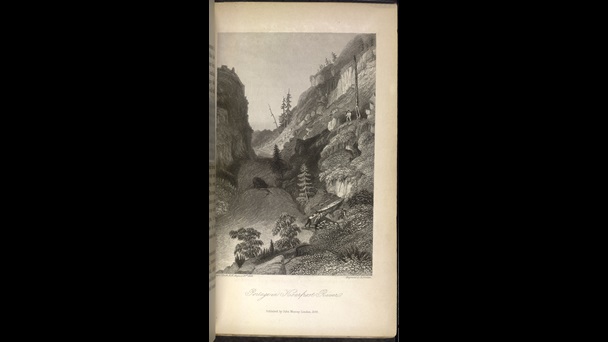 An illustration by George Back showing Hoarfrost River, which runs from the north into Great Slave Lake. Back was a talented artist.

In 1837-39, Dease and Simpson led an expedition for the Hudson's Bay Company to explore from the Mackenzie River those parts of the coast of the Arctic Ocean that had not already been explored by Franklin. After their journeys only a small part of the Northwest Passage remained to be surveyed. Simpson hoped to continue his discoveries but a combination of circumstances forced him to return home. Unfortunately on his way south from the Red River Settlement, Simpson met a violent death which is still shrouded in mystery.

Now that much of the Arctic coastline had been mapped, Barrow decided to organise a major expedition that was believed would solve the enigma of the Northwest Passage once and for all. On May 19, 1845, the 59- year-old Sir John Franklin, together with 127 officers and men, set sail in the Erebus and Terror in the unexplored region between the south side of Barrow Strait and the north coast of America. In July 1845 two whalers sighted Franklin's ships in northern Baffin Bay, but after that, the members of the expedition lost all contact with the outside world.