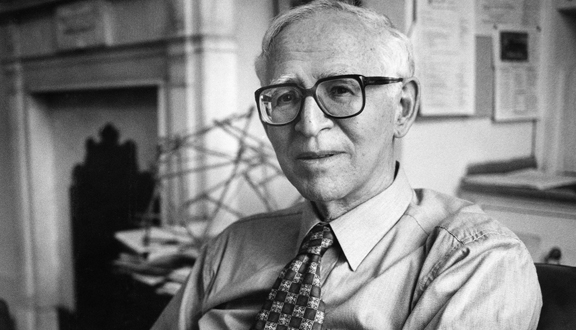 Aaron Klug tells story of working with Rosalind Franklin on protein crystallography at Birkbeck College, University of London in the mid 1950s.

And so what happened with Rosalind, is that she didn’t used to – although I came to Birkbeck in September 1953 at the beginning of the academic year, I didn’t meet her until about January ’54, because she never used to come to tea. There was a sort of departmental tea. She used to go to tea across the road in the staff tearoom. I don’t mean to be standoffish but that’s what she did.

Yes, well she had this reputation of keeping away from –

Well it was a – I don’t blame her in some ways, if you look at the rough and ready people in the tearoom, but she – and so I was lucky to meet her. And she showed me some of her x-ray diffraction photographs - tobacco mosaic virus - which were – they’re not crystals you see, they’re actually viruses which are in – oriented gels, and she showed me something which she couldn’t understand. So I began to learn about helical diffraction of non-crystallographic things, this was a helix, and I actually worked out a theory of helix diffraction later with Francis Crick. So I was able to interpret some of these strange features on some of her x-ray films. So after that I was basically hooked you see, here at last, and Rosalind set me the example of working on large and difficult problems and, er, which determined the rest of my life and was sheer luck in a way.

Did you work with her at some point or – ?

Oh yes, probably I worked with her for four years. And I was – people think of her as the experimentalist and myself as the theoretician, we made a powerful combination. But the fact is that Rosalind was a pretty good analyst herself and I also understood experimental work. So it’s not – you can’t – things don’t work by having a, so to speak, an experimentalist and a theoretician, you have to – it has to be a merging in one's own brain of these things. But I could do more theory if necessary, but I also, you know, began to do some experimental work. And because I wasn’t a pure physicist and I had been – or I’d already obviously done dissection of cadavers, I’d done physiology, I’d done – tested for sugar in urine and I was doing biochemistry and things like that, I wasn’t scared as the physicists were of touching wet and dirty, messy things, you see.