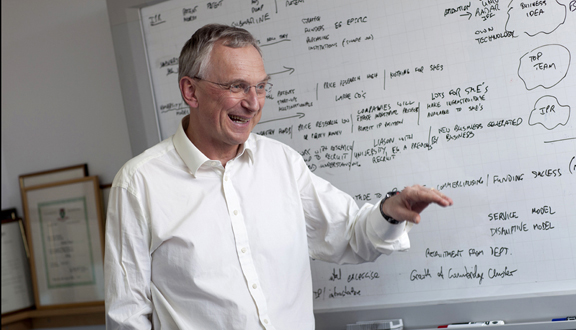 Well, erm, it’s a serious business, important in one or two areas and very tactical in other areas, and unimportant in many other areas. So in medicine and drugs, it’s very important ‘cause you’re patenting in principle, life, basic things, which have no alternatives. In engineering it’s working systems, so you can patent those, but normally there are alternative working systems, so it’s necessarily a little bit more tactical. Now the alternative working systems, you know, might be a little less good, so there is some value in it. I think patents are important to enable a small entity to stand up to a large entity, for new things to grow. But it’s not been working particularly well. And in particular an aspect that’s not worked is that people, who aren’t practitioners acquire patents and then use them as a method of suing people, rather than using it as part of a productive, upward. So I don’t think that’s helpful. And I think they have little place in university, I think intellectual property has little place. This is not a mainstream perspective, but nevertheless I think occasionally it does, but most of the time it doesn’t and I think universities are very unlikely to make money on patents. So it’s actually if they spend any of their own money on a patent they’re gambling, and I think if they’re gambling with the, in their usual way, you know, on average they’ll lose, although there might be one or two winners, but there again. Erm, and on balance for a university I think it is more attractive to go for donations, erm, more likely to be successful. In business it’s rather more obvious in a sense, in that you have a spectrum of ways of dealing with intellectual property, you have patents and those that can be asserted, you have patents which are not bad but mainly defensive around the product. You have pump and dump, so patent applications you’ve made that you know won't succeed but will help you temporarily in a negotiation. You have obfuscation, you just don’t show what you’ve done, therefore even though you might be breaching something, unknowingly, nobody can find out. You have trade secrets, so it’s similar to obfuscation. Obfuscation’s where you even disguise it somehow, trade secret is you don’t disguise it but you just don’t expose it. You have publication, to try and prevent others getting patents, but you publish what it is that you’re doing. So that levels the field but you still might lose. You have pre-competitive situations, where you’re building a platform which you might patent but you know that it’ll be standardised, and those patents underpin those standards. So, erm, they will be licensed for next to nothing, but it’s a method of coordination, so that’s different still. So, you know, you play this game up and down this spectrum as appropriate on a per product, per case basis.

How important has patenting been to your own work?

Not at all. I’ve not, I’ve only ever done one patent, and that was just to see what it was like. So I’m the proof of the pudding, that you can start businesses and get things going. Those businesses have patents, but the point is in my field it is not patent driven. And then for software, it’s not clear what a patent is anyway. So for software companies the whole thing is, it’s more copyright rather than patent. And licence of a copyright work rather than an invention which you own. And so that itself is rather different.