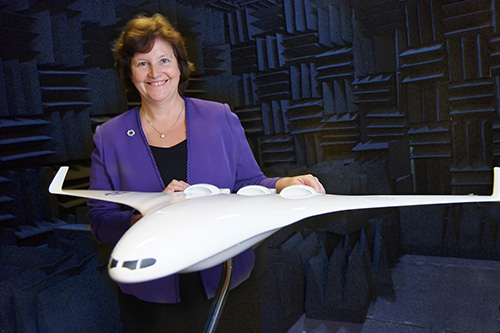 Show full transcript
The largest project I worked on has probably the Silent Aircraft Initiative. There we had a group of about forty people working at Cambridge and at MIT around an aircraft with an extremely stringent noise requirement. In spite of the title, it wasn’t really to be silent, but our target was to reduce the noise of the aircraft down to the background noise level in an urban environment, outside the airport perimeter, really a huge reduction. When you set a reduction that’s quite as challenging as that, it really concentrates the mind, because just making minor changes will get you nowhere, nowhere near it. So the idea was to do something that looked different, but could meet this really strong noise target. We came up with a blended wing body, or an integrated flying wing if you like, where you get a lift from the part of the aircraft where the passengers sit, as well as from the wings. Looks a bit like a bus I suppose. I mean people have been talking about flying wings, blended wing bodies, for a long time, one of the problems with them is that they’re hard to control. They’re very good because they have a high lift to drag ratio, so you don’t get much drag, which is really great, so you’ve got an airframe that can be very efficient. Well, there’s no one thing that makes it quiet, you actually have to deal with a whole host of sources. The most important noise sources on – at takeoff come from the jet, and we reduced the jet noise by having very large, low speed jets. The other element that’s really a major contributor to noise at takeoff is the fan, the big fan at the front of the engine. And there we really reduced the noise from that by shielding, by having the engines on top of the airframe. Having the engines on top, towards the back, really prevents the forward propagating noise from the fan reaching the ground effectively. You can get some scattering, creeping rays around the edge of the airframe, but they’re very well attenuated. But you would still get noise propagating backwards through the bypass duct and going out the back of the jet pipe, and there was had optimised acoustic liners, sound absorbent material. So that deal with the engine noise and that’s the main element at takeoff. But on approach you get as much noise from the airframe as you do from the engine, so there were then another set of noise sources to deal with. Well the noise from the airframe scales on the fifth or sixth pile of approach velocity, so coming in slightly slower reduces that sound, so that was one aspect. An aircraft coming in to land does need drag. If you think about it, the aircraft starts off high and fast, and it’s got to lose both potential and kinetic energy to come in and land. And on a normal glide slope, several passenger aircraft as a mid sized range is dissipating something like six megawatts of power throughout its final descent. And that’s done at the moment by the drag on the aircraft, by putting down draggy devices, lowering the undercarriage earlier than it needs to be just to land, putting down flaps and slats. All these things increase the drag on the aircraft, which means that the kinetic potential energy of the aircraft’s being transferred into the air, and it goes into the air, it produces vortex motions, it produces turbulence, and it’s those things that we hear, they generate sound, it’s those things we hear as sound. So we needed drag, we needed – but we needed it in quieter ways. So it was no one magic thing, you really needed to tackle a range of different noise sources.