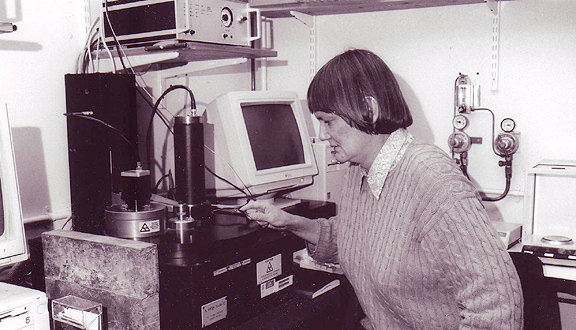 I thought I was going to be dating the formation of the calcium carbonate shells, but after about a month in the lab in Canada I realised that we were only getting signals from the dirty – little dirty shells and therefore, if it was the dirty ones, that meant it was the little grains of sediment, the little quartz and feldspar grains that were adhering to these shells that I was actually getting the signal from. And this meant that I couldn’t possibly be looking at formation of anything. What I was looking at was material of a very old geological origin that had been reset. It wasn’t reset by heating, like in the – in pottery or in burnt limestone. It was clearly being reset by another mechanism. And the only other mechanism of getting energy into crystals that could do that was light. It was exposure to light that was zeroing my signal and that signal was then growing again, as it grew in pottery. And so we thought, a-ha, and then we realised that we wanted to be looking at the grains which we’d been previously washing off happily down the sink, to get our little clean siliceous organisms. And so now we were collecting all the grains from these sediments and then we started looking at those mineral grains, the quartz and feldspar grains, that come into the oceans, get exposed to light during their transport process to – out into the ocean, then down – as they settle down into the ocean floor and then they build up with time and their signal builds up, and that’s what we were – ended up dating. And that led to a paper in Nature that we published towards the end of the two years that I was working there in Vancouver.