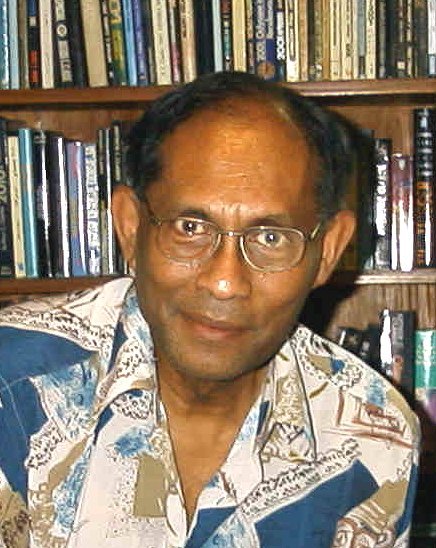 Chandra Wickramasinghe discusses the underlying cultural-theological features of the debate between Steady State and Big Bang models of cosmology in the 1960s.

What did you see in practice of that debate in Cambridge between Steady State and Big Bang theories?

That was a debate between - I saw it as a debate between different ideologies more than different scientific models.  There was a - essentially the epitomy of the Big Bang theory was the Judeo-Christian kind of model of creation was essentially rendered into a scientific mould in the Big Bang theory and I think that connection, although people didn't admit it, played a very important role in how the argument progressed; the flimsiest evidence against the rival theory was seized upon by the Big Bang theory that was really very popular in the whole of the astronomical community at the time for the reason that it was so consistent with the long held sort of theological belief that the universe had to have - had to start in that way.  The initial evidence was really very flimsy against the rival Steady State theory.  That evidence, however, got stronger in the mid 1960s with the discovery of what is called the Microwave Background - it was discovered quite by chance that the universe is filled with the background radiation at microwave wavelengths and this was interpreted, almost certainly correctly, as evidence of the relic radiation that came from some kind of big bang explosion, although I think it's still not clear that the universe has a singular, single Big Bang origin.  So this was the kind of debate that was going on - Big Bang versus Steady State - and it was quite an exciting debate because, as I said, one side was propped up hugely by a cultural backdrop of more or less theological belief as well.  It never surfaces even now, but the parallels are just astonishing: the conventional viewpoint is almost a carbon copy of the biblical version of creation.

Do you see Fred Hoyle's Steady State position as having its own ideological or cultural founding then?  If the Big Bang group had this sort of sublimated match-up with Christian arguments, what were the sort of cultural arguments of the other-?

Yes, I found a resonance with Hinduism and Buddhism and Eastern, Indian, Oriental philosophies because in those philosophies - in those eyes - in that kind of thinking - the universe could not have had a beginning; it was always there as it were.  And there might have been oscillations, there might have been an oscillating universe and collapse and rebound and so on, so there were various possibilities but the philosophical problem that I faced and that Fred Hoyle faced was that if you have a universe that is supposedly starting at one given moment in time, you can ask the question, “What happened before?"  And you're not supposed to ask that question; time is supposed to have not existed before and that's, I think, a cop-out.  If you can frame a question semantically, in words, so precisely - what happened? - and you're not supposed to ask that question then I think there's something wrong in the system of thought that is involved there.  So philosophically I found the strict Big Bang models unsatisfactory and I still continue to think that it's unsatisfactory.

The origins of life on Earth