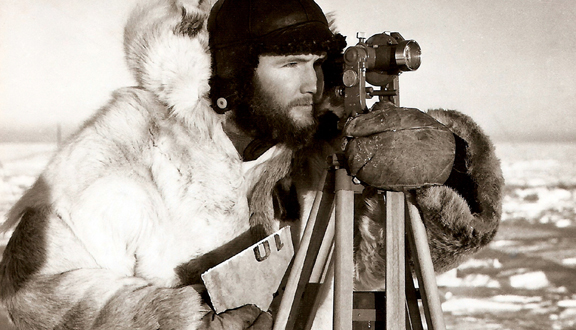 Charles Swithinbank tells the story of briefing Margaret Thatcher in Number 10 Downing Street at the beginning of the Falklands War.

There was a policeman outside and I said, ‘Adie and Swithinbank, we've been invited to talk to the Prime Minister.’ At that point the door of Number 10 opened and was ushered up the stairs, unaccompanied, just the two of us. But there was a small sort of drawing room facing the top of the stairs and in it was the Prime Minister, and I remember thinking how beautifully quaffed she was, without a hair in the wrong place, holding out her hand to welcome us, and led us into a room beyond the Cabinet room. She sat on one end of a sofa, I sat on the other, Ray Adie opposite. And she said, ‘Would you like a drink?’ And she was brought, without being asked, a glass of whiskey. And she began by saying what she had invited us there, as people who know about the Antarctic, was because she as Prime Minister was terrified that the war, which had only been going weeks at that time, might spill over into Antarctic. And that would be far more serious because it would be a breach of the Antarctic Treaty, which concerned every one of the twelve nations that had signed the Treaty. So the first thing she asked was, ‘If one of our stations was attacked, how long could we hold out?’ The answer was, ‘Thirty seconds or something, we have no guns and we’re scientists and we could not hold out at all.’ And she said, ‘Right,’ and went on to the next question. And this questioning went on for the whole of ninety minutes, just like a good radio or television interviewer, without a pause. It seemed without strain, but it showed that she had all these things pent up inside her. And she was impatient, and understandably so. Eventually, of course, she ran out of questions, but we were wondering whether we should shift towards the front of the sofa or something, but it was obvious that it was up to her to end the meeting, and we were wondering how she would end it. And she ended it by saying, ‘On the way out I will show you that I have arranged in the Cabinet room a number of scientists,’ I forget who they were, Faraday certainly, ‘two portraits to be hung on the wall of the Cabinet room.’ In other words, she was reminding us that she was a scientist herself, a chemist. And so that was clear that that was the very polite invitation to leave. But what amused us was that a week after our visit she had a visit from Ronald Reagan and he was given half an hour, not one and a half hours. [Laughs]

Charles Swithinbank: holding hands with your boss in a blizzard

Charles Swithinbank: driving a tractor on ice with Russians