Charles Swithinbank: driving a tractor on ice with Russians 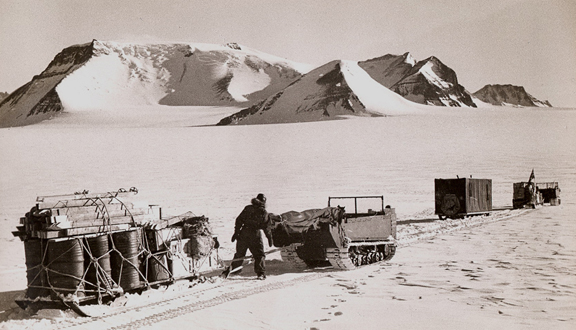 Charles Swithinbank tells story of driving a tractor on ice during participation in a Russian Antarctic expedition, 1963-1964.

As soon as we got to the Antarctic I realised that they were short of tractor drivers so I volunteered to drive a tractor, and did. And of course not many people had driving licences in the Soviet Union at the time, so it was a great advantage to have a – being an experienced driver. And so they immediately put me into a tractor weighing thirteen tons, checked me out on how to change gears, and then sent me back and forth to the ship with an enormous sledge behind carrying, well carrying from the ship to the shore, twenty-five tons of fuel drums. And this on sea ice which was rotten and rotting further. So it was quite frightening. But every – there were several other, several Russians doing it. And I had seen a film, a Russian film, years earlier of one of these tractors going through the ice and sinking straight out of sight with the driver. And I had this vision all the time. But that driver had a cab on his tractor and that’s why he was pulled down. I didn’t have a cab and so I was always prepared to jump off, if I could get away with jumping off. But it was quite frightening because there was – beneath the snow on the surface there was a layer of water, perhaps a foot of water or more, and then another layer of solid ice. And so you’d feel yourself falling, but then you’d stop after a foot and you’d be splashing through water. You didn’t know whether the ice underneath would support you or not. It was very, very scary but I had let myself in for it, I had volunteered, and so I got on with it. And they were very, very friendly and sometimes we got stuck, sometimes somebody else got stuck, and we had to unhitch our sledges and two of us haul on one sledge. Well, that was, you didn’t need language to do that, it was all obvious. And the wonderful thing about the Russians was there was always more laughs than tears. I mean they had a hard life and they were used to taking it in their stride. And so we had lots of laughs and wonderful, mutual help.

Charles Swithinbank: holding hands with your boss in a blizzard