Chris Rapley: a tour of Mullard Space Science Laboratory in the 1970s. 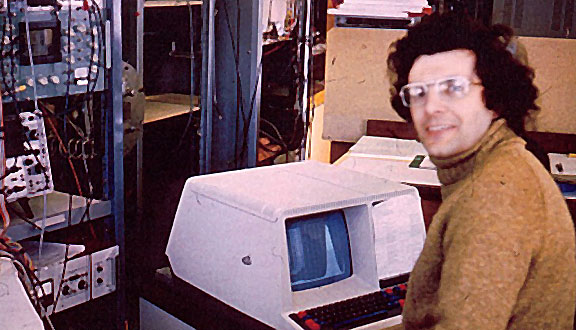 Chris Rapley describes Mullard Space Science Laboratory in the 1970s where he was working on satellite instruments for X-ray astronomy.

Show full transcript
It was – it was a classic almost sort of wartime model of this beautiful estate, you know, with a wonderful old country house, with oak panels and so on, which had been turned into this high tech hotbed. I think it was a – it was a really exciting place to be. Probably when I got there – probably only about seventy of us there. And there was always – I mean, there were so many missions going on. There was always something going on. And people – of course, travelling a lot. I’ve not had the chance to travel like that. I mean, going to the States for the first time and so on was very exciting. And so it’s this weird mix, you know. ‘Cause Frank the gardener, who’d been the gardener there for, I don’t know, forever – ‘cause it had previously belonged, I think, to a school and prior to that to some – some senior business guy in the ‘20s or ‘30s. He used to fly an autogyro out to it. I mean, it had an interesting history. But Frank the gardener would come into the lab each morning and, you know, chat a – he’d joke about, you know, what’s the weather going to be like. It was just a very nice atmosphere. There were some student flats in the old stables. There were two big experimental labs and they were just like, you know, ordinary big physics labs, but they had vacuum chambers in and all sorts of apparatus. So you would see large rigs of apparatus, physics type apparatus, with cables snaking everywhere, where people were carrying out their laboratory work to develop the instruments that they would then fly. So in those days they could – they still had a lab technician, a guy called Harry Goddard, who sat in the lab GO5. And then elsewhere round this lovely old country house there was the computer room, where there was an IBM 1103 computer, that would kind of have filled half this office and had 8k of magnetic core in it. But I did all of my calculations in double precision to get this kind of spherical trig to work out, you know, how to orient and point my rocket on that. That used to take it a day to do the calculation but – and then there were other labs. There was a mechanical design area, where there are guys, you know, with big drawing boards, you know, designing the payloads. There’s an electronic design office where they would be designing stuff. And then out at the back, again in another set of old stables, were the workshops, where the technicians would be manufacturing the pieces of the experiment, milling them, you know, with lathes and so on. There was a store where you could go and help yourself to resistors and transistors and what have you to develop stuff in the lab, which would then be turned into space worthy equipment by the professional designers. There was a library, oak panelled, in which we used to meet and have discussions and meetings about things, planning meetings. There was an admin area where the secretaries were and then we all had offices sort of, you know, I was up in the attic initially, which we would share. And then there were beautiful grounds. And there was quite a tradition that every lunch time we would stop work and go for a walk. You could walk up onto the top of Holmbury Hill. There’s a trig point up there, a beautiful view across the Weald. Or at the very minimum just walk round the perimeter of the estate. There’s a – there’s a road that runs round and a drive that diagonally runs across the middle. And those were opportunities, you know, everybody of all ages and disciplines used to wander round. It was completely voluntary. It was a mixed bunch each day. But it was an opportunity to find out what was going on and talk to each – each other and learn things, so it was very important from that point of view.

Chris Rapley: doing science as a rejection of materialism