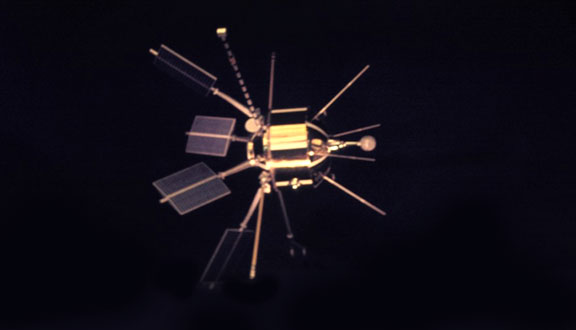 Chris Rapley remembers childhood interest in space and technology in the 1960s.

Show full transcript
My father, through his job, because he dealt with a lot of contractors who were providing sonar systems for the navy, they were also the same companies that were providing systems for the Air Force and for commercial aircraft, I suppose. And so he used to get tickets to go to the Farnborough commercial days and on two occasions he took me there. And I particularly remember the Avro Vulcan – the V bombers being flown over the assembled crowds. And in those days, you know, before there had been a number of accidents where they kind of changed the rules of engagement, the pilots could have fun flying these things at the crowd, so coming across the runway to us. And I think it was a Vulcan, a couple of Vulcan bombers, they just pointed their noses up and put them on reheat over the crowd and the pressure waves were so enormous – I mean, the noise was fantastic, but the pressure waves were so great that you felt you couldn’t breathe. This had a tremendous impact [laughs]. I thought it was – thought that was wonderful and looked forward to being able to go back again. Now I took some photographs the second time that my father took me there so I – I can find out what year it was but it was probably, I don’t know, ’62, ’63, something like that. And I took a picture of a model of Ariel 1, first British spacecraft. And so this was a bit prescient in a way because I took a picture of Ariel 1, probably didn’t think that much more of it, but I mean, it looked great. It was sort of gold plated and so on. I think the model’s still around somewhere. And it’s difficult for me to remember how much I was aware at the time. I was interested in that sort of thing, so when you heard about Blue Streak and Bloodhound – and remember I said I used to be an avid reader of Eagle at one – the Eagle comic whether I was – I can vaguely remember their cutaway of a Bloodhound rocket, for example. So these were exciting things. Oh yes, and actually there was an Eagle annual, a – it was called 'Eagle Wonders of the Modern World'. It wasn’t one of their normal Christmas annuals. It was a sort of compendium. And that had a – I’m pretty sure that had a section on space in it that sort of talked about, you know, the future and the sort of things that space could be used for. And remember, there was a lot in the popular culture then. I mentioned Dan Dare and so on last time. It was – it was a kind of – it was symbolic of a technology based future. So it was exciting. I don’t think that I paid especial interest in space. I had no plan to go into space science, for example, at that point. It was just part of the kind of exciting culture that was around.

Chris Rapley: a tour of Mullard Space Science Laboratory in the 1970s.

Chris Rapley: doing science as a rejection of materialism