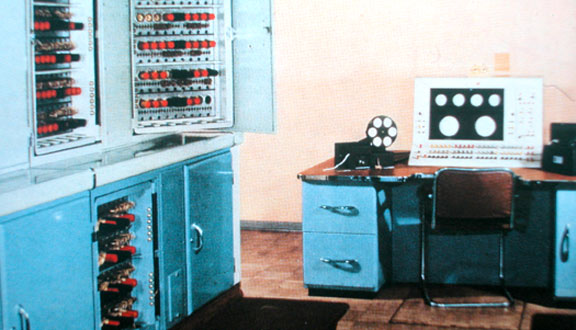 Dai Edwards recalls setting up the Manchester Mark 1 computer for Alan Turing and other users.

Users started using the extended prototype. Turing joined the team he did come in and use the machine for various things. He designed some simple programs but I think he also got on trying to do some more comprehensive things. In the later stages when the drum system and it was fully operational both Tommy Thomas and myself used to come in at night, for example, to keep the prototype work – making sure that the prototype ran satisfactory for him whilst he ran his programs on the machine. There was also another man who came in, a man called Gordon Black, who was doing optical design. Now I think he came in, in the early days as well to run things on the prototype. But, something you could call a user system only resulted when the Mark 1 came into operation, you know, the commercial machine. We had the odd user before then but not, it wasn’t run on an official basis, it was run on a casual and friendly basis. I mean there was a period with Turing who ran the machine whilst the instruction system for operating the drum wasn’t working. So he used to be downstairs at the keyboard and monitor display doing his job, and Tommy Thomas or myself would be upstairs and there would be an intercom between us to select the tracks that he was wanting to transfer down to the random access memory. So there was that action in the early days. Clearly when the completely automatic system was introduced then that interaction disappeared, and what we were really doing was – what we were doing was some of our own work, er, some of our own activities, but we were there in case he had a problem. For example, he might be experiencing some difficulty with the CRT memory, some problem due to the fact it wasn’t working properly, and so it might be necessary to set up a CRT memory again.  We would have to check up what it was and try to get it back, you know, so he could use it again. So the interaction with users, apart from making sure the system was really operational, was fairly minimal, except that we were concerned about them being happy.

How was Turing to work with anyway?

I found him quite pleasant. Er, it was difficult because he stuttered and so it wasn’t easy to follow and his mind worked so rapidly that he did – every word in a sentence that he was speaking didn’t actually get spoken, so he jumped to the critical words. Now it did take you a little bit of time to adjust to that but once you were adjusted there was no real problem. And, er, you know, provided you could communicate with him he was really quite pleasant, and in fact he invited both Tommy Thomas and myself out to his house in Handforth for dinner and things like that so, you know, a very pleasant evening. So there was a, you know, reasonably friendly relationship.