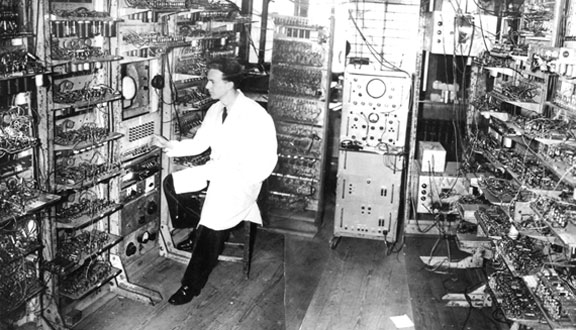 Dai Edwards recalls changing ideas of computer use and scepticism over the building of the 1960s supercomputer Atlas, for a time one of the most powerful computers in the world.

[pause] Well, we were introduced to crystallography problems very early on, okay, ‘cause they were in a desperate situation. And, the other thing is there was a man designing lenses using optical techniques who seemed very keen to use computers. And there was an awareness that computers could also be used in business, that the existing systems, you know, your card – card machines and those sort of things were very limited in their capability. So the potential, as it were, for doing something there was available, right? And I think people like Remington Rand in the States were very keen to go down that – you know, that sort of business route. So I think we were aware of, that there were some real uses but it was also quite clear that there was really, you know, not universal support for doing anything with computing. And I mean I would say there was not support for – universal support for digital computing as late as the 1970s, that certainly with Atlas – I mean there was talk of doing things but it was not cohesive, it wasn’t pulling together, you know. And I mean I think quite senior people when Atlas was made said, 'why on earth are we making Atlas when the whole country doesn’t need an Atlas?' Now if you bear in mind that I have a machine much better than Atlas on my desk, now, you’ll see, you know – I’m talking about a terabyte of backing store! [Laughs] People in those days would have gone, in those days it was very important. I mean the reason you did machine code programming was ‘cause you daren’t afford – you couldn’t afford the efficiency of having anything elaborate, right. You had to use – do it as efficiently as you possibly could, then you could make progress. And I mean there’s no doubt that the crystallographers in something like the 19 – late 1950s, were saying that they’d made really useful projects, progress. So, you know, that was – that was encouraging, but equally there were people who said when we were making Atlas, 'Why make Atlas? ‘Cause we only really need one machine for the country.'