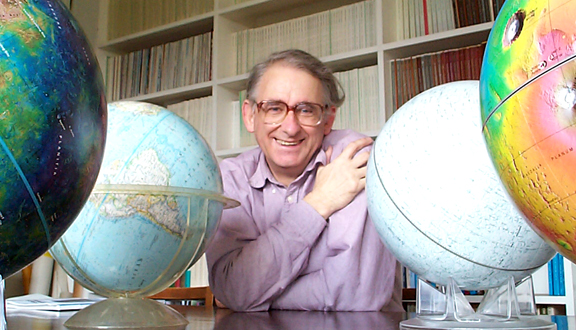 Dan McKenzie describes the use of Lyle's Golden Syrup as an analogue for the Earth's mantle.

At that stage, on the computers, we could just about manage to look at convection when the viscosity was constant and didn’t change with temperature. Now we knew right from the beginning that in the Earth that was not going to be correct, because how do you make the plates? Right, the plates themselves must have a very much higher viscosity than the mantle below to move rigidly, and yet they’re made out of the same stuff, so it’s just purely a temperature effect. So one of the things we wanted to look at was the effect of allowing the viscosity to be a very strong function of temperature, to reduce. Right. And syrup has the most remarkable, Lyle’s Golden Syrup, has the most remarkable property that if you go from a temperature of minus ten to fifty degrees centigrade, which is about the working range you can do without it turning into toffee, erm, the variation of viscosity over that range is about ten million. Right. So we could – we really had – and it behaves, it’s what’s calls Newtonian viscous, so it behaves in the same way; it’s a proper fluid, it doesn’t do things nastily to you. So we thought well this is the stuff we should use. [Laughs] We wrote to Tate & Lyle, who gave us huge quantities of this stuff, right. And the only problem with the syrup, Lyle’s Golden Syrup, is that it has a habit of crystallising. And sometimes we would come back, we’d leave it running overnight, and we’d come back and we found the whole tank had turned into crystals of sugar, right, and then we had to dissolve that out and we then turned it into beer, right [laughs] by fermenting it [laughs]. So it was quite perfectly good stuff. Now that allowed us to study the effect of having very large variations of viscosity with temperature. And rather to our surprise, that has very little effect. What happens is that the – it makes a thick lid of very viscous stuff and then, in the interior, the variation of viscosity is quite small and the convection looks really quite like, you know, convection when there isn’t the viscosity variation.

And where was the apparatus that you set up?

That was at, at Bullard Labs, so I mean we built it ourselves. It consisted of a framework made out of something called Dexion which is just a steel angle iron with holes, so that you can bolt bits together, and some big mirrors, and then sheets of glass. We drove the whole thing by having hot water on the bottom and cold water on the top, and we had a pump which circulated the water and a great big tank in which we kept the - governed the temperature and put the heat back in again. And so you then had a thin layer of Lyle’s Golden Syrup in the middle and you passed light through all this glass and made images of what the pattern was on the screen. And you could see all –and we made movies of how it happened. You know, you could see the pattern changing with time, right, in the movies.