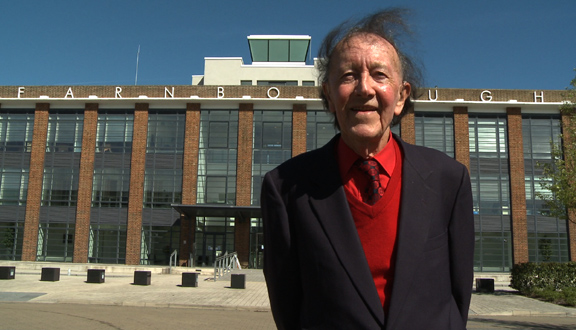 Desmond King-Hele reflects on his retirement from the Royal Aircraft Establishment in 1988, including a reading of his own poem 'Escape'.

It’s called 'Escape'. 'After fifty years in Institutions where my life was sheltered and sure, I’ve come out for Community Care for a course of kill or cure. Life’s a joke that’s just begun at the tender age of sixty-one.'

How did you view your career and work from the point of view of retirement? So at the time that you retired, what was your –

Well, again, it was quite successful in a sense. Because I could see that the work that I had done had been extremely sort of innovative in a way to start with. And then, as time went on, it became more routine but we were still contributing quite considerably to knowledge in the – about the shape of the Earth and the upper atmosphere. But there was no enthusiasm for the work from the RAE as you know. And it also was obvious that all the new things that were coming in, like laser tracking and very accurate other things, very accurate orbit determinations, were going to lead to much more accurate knowledge. And so I could foresee that the work was not going to continue to be, if you like, top class, it was going to be – it could be continued but it wouldn’t be leading the world anymore. And so I was in a way quite content to allow it to cease, rather than like some academics do, continue on with their own line after they’ve retired.