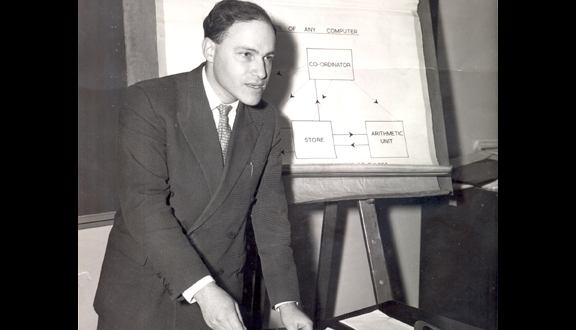 Frank Land remembers acting as an advisor to a Parliamentary select committee on the computing industry in the 1970s.

The government, the Conservative government, set up a select committee to look into the computing industry. It was about 1973, I think. The chairman of the committee was a man called Airey Neave, but Airey Neave was a good friend of … of Sandy Douglas, he was asked to join the committee as some advisor, and in turn I was then asked to join as an advisor, so the two of us were acting as advisers to the select committee, which really was a rather fascinating occupation. What the specialist advisers do is to brief MPs on the subject. The MPs are generally totally ignorant of the subject, some know a little bit, some know less, but you provide as good a briefing as possible. And the select committee examines witnesses who are asked questions, but the questions are largely provided by the specialist advisers. So before any meeting the specialist advisers have come up with a list of the kind of topics which the MPs might want to take up. Then as the question goes, the specialist advisers sit behind the committee, at a table behind the committee, and if they spot that a question should be asked, they will write it on a piece of paper and pass it to an MP, one of the MPs. Or they’ll whisper to the MP, ‘Why don’t you do this, so and so.’ So they’re very actively engaged in this. But these advisers are often academics. So you find nearly every select committee, you don’t hear about them, they’re not mentioned, but they’re there and they play an important role. I don’t think it could function without us. There are always, as I say, some MPs who are more knowledgeable, and some of them pride themselves on their knowledge. The Report was subsequently debated in the House of Commons, and I went to the debate to listen to it. And it really didn’t get anywhere. Many select committee reports didn’t, they’re sort of sidelined, and this was one which was sidelined. I think some notice was taken of it by the government, in its subsequent policies, but you couldn’t say, ‘This was the outcome of that committee,’ it was nothing that concrete. Nevertheless, I think it was one of these things which informed Government, which informed policy makers, about things they were probably very little aware of. Rather than directing a particular policy, it led to, I suspect, a greater understanding in general.