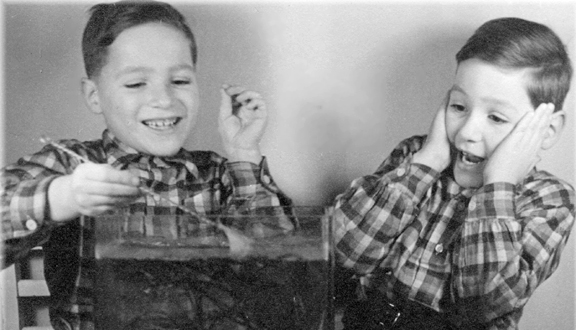 Frank Land talks about immigration to England with his family in 1939, his education and first job at Lyons, and changing his name to Land.

Show full transcript
I was born in 1928 in October, in Berlin, Germany. I came from a family which was fairly prosperous, manufacturing. And when we grew up, my brother and I – I’m a twin – we were content, lived in quite a nice flat, and then gradually Hitler impinged. First of all, my father’s business was confiscated, his business partner actually sold him down the river, stabbed him in the back, and in 1938 of course I remember very vividly Kristallnacht, the destruction of the Jewish community and much of their property. One of my uncles was one of the earlier people to go to the concentration camp at Dachau and so at that time we tried to get out. so we came to England in April 1939, found ourselves in a strange country, and we had no English at all, but we lived in Kilburn and we went to the local primary school there. And we were lucky in that we had a teacher who was very sympathetic and very good and managed to get us to learn English very quickly. And this was very necessary because a few months later, very shortly in September, we were evacuated. We had no idea where we were going. So we finished up in Watford station, we were bussed then to a little village called Bedmond. our school went to the village hall. But it was an elementary school at that time up to the age of fourteen. There was an eleven-plus exam, a scholarship exam, but we, our English wasn’t good enough to even bother to take it. So at the age of fourteen the headmaster told my parents that probably the best thing for us to do was to go into the Post Office, because one could have a progressive career there. This was something my mother could not accept and persuaded the headmaster of Willesden County Grammar School to take us on and we went into a class below our age range, but we soon went up to our proper thing and took the usual examinations and finished sixth form with Higher School Certificate, which entitled us to apply for universities. Now, at that point we sat the examination for, the scholarship examination for the London School of Economics, came high enough on the list to be subsequently offered places at the LSE, graduated with a sufficiently good degree to be offered posts at the LSE as research assistants and worked, joined the economics research division. My brother and I talked to the careers advisory officer there, a man called Commander Evans, Warren-Evans. At that time our name was Landsberger and he said, with that name you’ll never get a job. He was absolutely wrong about that, but we believed him and we went out immediately to solicitors and said how can we change our name? And the answer was, well there are several ways of doing it, you can do it by deed poll which is a complicated process, or you could go to the Food Office and say I want to change my identity card and I want to change my ration book, I want to change my name, and that’s the easiest way. And that’s what we did, so we changed our name from Landsberger to Land. And we thought that perhaps we ought to look for employment outside in the commercial world and we applied to many companies. And I was finally offered a job by J. Lyons and Company. At that time Lyons were developing the LEO computer. I knew nothing about that, but a notice went round that anybody who was interested in this, whatever it was, didn’t know, were invited to come on a one week course or were selected if they fulfilled certain criteria, one week course. I found it very hard, it really was quite hard learning about computers, learning how to program in one week. And I was selected then to join the LEO team. This was in late 1952 or early ’53.