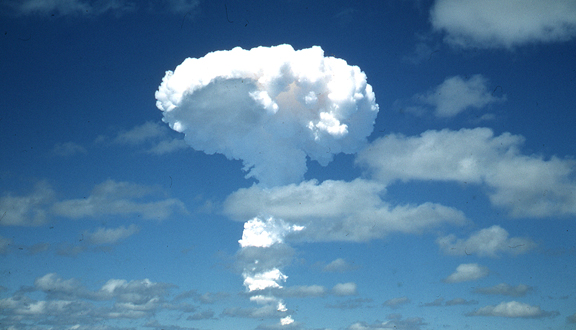 Where were you when everything happened?

Oh, I was in the forward area again with the control group, because as re-entry, during the period of the drop we sheltered in the – if you like recording buildings, the buildings in the cabins that they had for the forward control. It – it was near enough the blast wave to be considerable when it came through. The preparations for this, for example, buildings were vented, i.e., the windows were removed and the doors were opened, etc, so that the blast wave could pass through. It – it was quite sharp actually, when the – the actually blast wave came through my impression of it was it was equivalent to someone running a stick across a piece of corrugated iron, BRRRM, this was the wave coming through and hitting the side of the aluminium type buildings as it passed through. And it was just as I say, I remember thinking at the time that’s like a child with a stick just stroking a piece of corrugated iron or aluminium [laughs].

Am I right in saying that Grapple X is Britain’s first hydrogen bomb trial?

I don’t know about that, you’d have to talk to the physicists. As far as I was concerned it was the first megaton test, it was – I mean that’s common knowledge now, it was about 1.8 megatons which was considerably more than we’d seen at – at Malden.

Just wondering, to a man who’s seen a few atom bomb tests before now, is there any difference, what do you see when it goes off?

Well we’re not there when it goes off. This brilliant light flash, when you have your back to some of the lower yield weapons which we did originally, you got this intense flash which is just a fraction of a second and of course then following by the development of the fireball and of course you don’t turn around and look at that. So it’s a – it’s usually a few seconds before you turn around and it’s – the fireball’s cooled a little bit and you can – then beginning to see it ascend and cool – cool down as it rises. Erm, of course the bigger the weapon the bigger the fireball [laughs] but in the case of Grapple X we waited until the blast wave had gone through before we opened the door and went out, we were not silly enough to want to go out prior to that. So it didn’t take very long actually, I can’t remember the time delay – I mean we knew, since I was in with a group of people, I knew immediately the weapon flashed because of the recording equipment, etc, that they had in there. And as I say we were in semi darkness and didn’t venture outside for a little time, a few seconds after that. And we saw this enormous cloud developing, I must say compared with previous ones I’d seen that was quite impressive. When you’re a few miles from a 1.8 megaton is a lot more impressive than being similar distance away from a twenty kiloton one [laughs].

In what sense impressive?

Scale, just the scale of things, size. I suppose, what do they say, they use terms like awesome these days don’t they [laughs]? I’m not so sure it was a term I was familiar with in those days [laughs]. Don’t recall any particular person’s exclamation or what have you, just stood there, hmm, oh my God sort of thing [laughs], yes. Or the other one, well you know, this one’s certainly impressive, as I’ve said because our expectations of the first one not being on the weapon and physics side we didn’t quite know what to expect, but we certainly got more than we expected with – with Grapple X anyway. And I believe reading the histories of course the Grapple Y was even bigger than that.