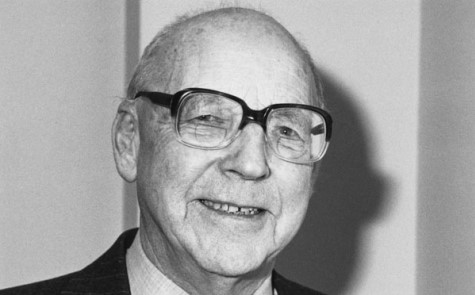 Frederick Dainton recalls his involvement with productions of Shakespeare’s plays during his schooldays in Sheffield in the late 1920s and early 1930s.

We had a thing called the Shakespeare Society, which got national renown, in fact; we were invited every year, on Shakespeare's birthday, to put a wreath on his statue at Stratford. And that was run by a very remarkable man named W.B. Marshman. What it comprised of, really, was every Christmas, before Christmas, the last five days of term, you put on a performance of Shakespeare's plays, which we did everything. We built the stage in the hall, all the electrics, of course, some carried over from year to year. We provided the orchestra, all the boys did all the parts, and it was a marvellous education, in fact, not just in Shakespeare, but in lots of other things too. And from my point of view, it meant that we rehearsed every Friday evening throughout the Michaelmas Term, which would have been, what, 12, 13 weeks, and you stayed at school; school finished at 3.30, and you stayed at school until lO o'clock, and you had dinner at school. They put this on for 5d., and well, the place was full, from all over the place, the Lord Mayor came, the Bishop came, you know, it was quite an event, and a book was produced about it, called “All Right on the Night”, which I have, and it...the performances were better than schoolboy performances, and quite a lot of the interpretations were, I think, very good in their own right. And so it was a great thing to belong to. And there were many other activities. There was another dramatic club produced, which was non-Shakespearian as well. There was, of course, the orchestra, which you'd expect, and art club.

Were you musical, in fact, as well?

Well, I played a very poor violin until I blew a finger off, and that was the end of that!

Frederick Dainton: being a busy parent