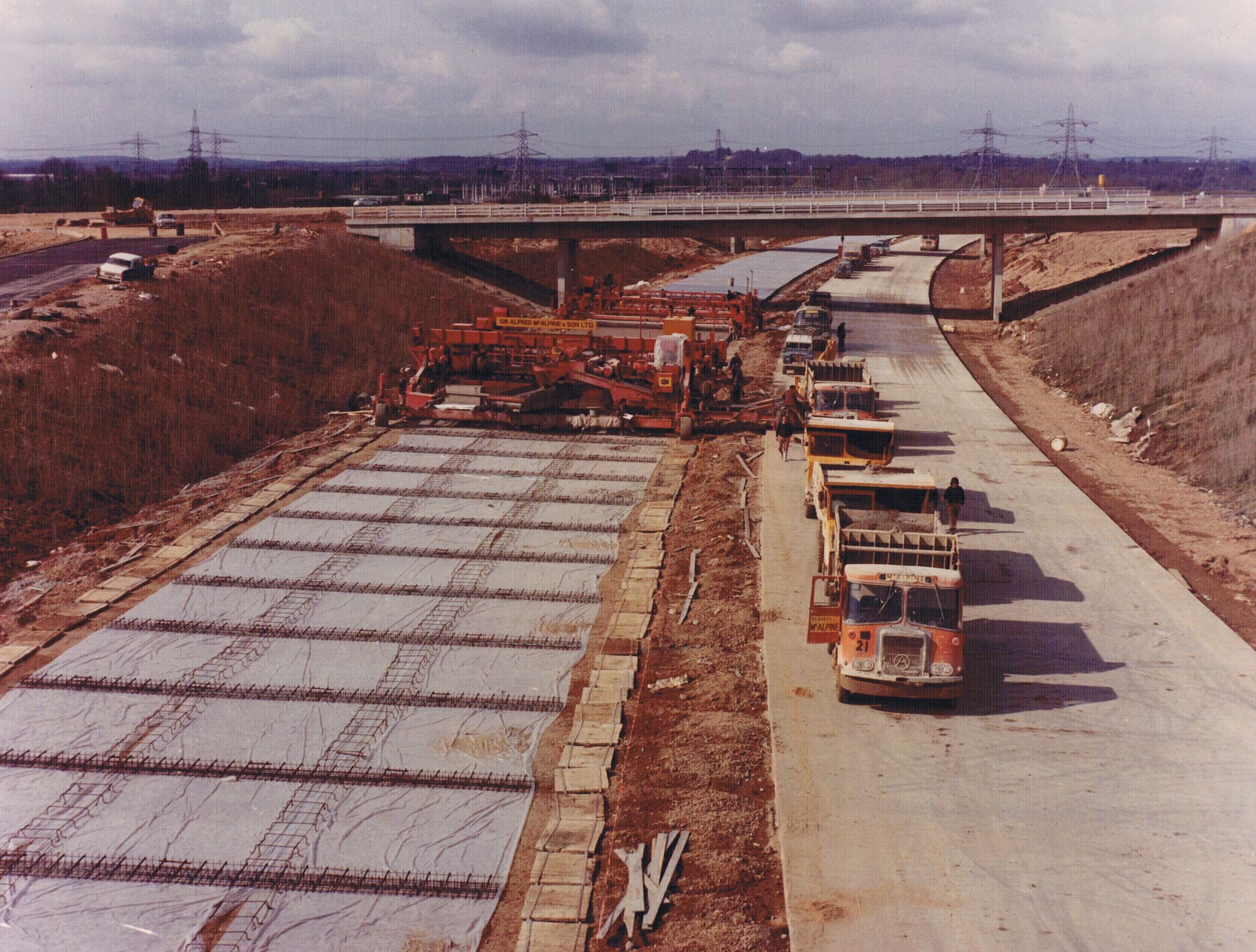 Howard Stevens describes how a motorway is laid by a concrete train.

If I was to see a concrete train, what would it look like?

If you were to see this concrete train that we’re talking about, on that first M6, you’d be very lucky ‘cause that was probably the only one that was ever in this country. And after we’d finished with it, it was never used again, because the technology for concrete making had changed. It was a two-layer construction. Three inches of hard stone concrete at the top, then there was a layer of steel reinforcement, and then there was ten inches of limestone concrete beneath. That was the construction of the concrete pavement. To answer your question, you would see a surface with polythene on it, that underneath that would be the sub base. Every forty feet you’d see contraction joints, the horizontal bars. And then you would see a machine at the front, which spanned the carriageway, with a hopper in it. And then you would see a concrete truck pull up, and it would tip into this, and this hopper would spread the concrete like this on the ground. And then the machine would gradually move forward, and it would strike it off at a level, so, and then it would – and vibrate it. That’s the first part of the train. Then behind that some men would appear, big strong men, who would pick up reinforcement bars, mats of them, and lay them on top of the concrete that’s already in. Then there’d be another machine behind that, to put the three inches of concrete down. And behind that would be the finisher, which would be a beam doing this, [makes a shushing noise], and that would strike it off to a fine level, and then smooth it over the top. Behind that there would be a man, this doesn’t happen anymore, there would be a man standing on a scaffolding bridge across the thing that ran across the full width of the carriageway, with a brush in his hand. And in the brush would be steel bristles and he would draw the brush across the concrete, laterally. And he brushed every square inch of that concrete road for nine miles up, and nine miles back. He must have had muscles on his muscles, that lad.

Well, why did he brush it?

To give a rugose finish, which meant that, when you put foot on the brake, on a concrete road, it would take about three years of wear off your tyres. God, it was fierce. And that’s of course been the one thing about concrete roads in this country that’s not gone down at all well. In fact a lot of – lot of concrete roads have had to covered with black top because the noise from it was too penetrating in the surrounding countryside. Behind that you have another machine, which is spraying curing compound on top of it, which is just a membrane which keeps the moisture in the concrete. ‘Cause, contrary to popular belief, concrete does not dry out. Concrete requires water for which to hydrate the cement, so it’s got to be kept wet, basically. And after that was a whole set of frames covered in polythene, because inevitably every time we did a concrete pour, it rained, so this kept it – this kept it as dry as we could. Now after they’d passed on, five hours after they’d passed on, there’d be another gang of men appear who would cut the concrete. Cut it across, across where the joints are, to allow it to crack. ‘Cause concrete, when it sets and hardens, contracts. Now when it contracts, it clearly will break. However, it will only break where it’s told to break. So therefore if you cut it, it will crack there. That’s what you do, so it’s cut. And then, about two weeks later, another gang of men comes along and cuts a longitudinal joint between the traffic lanes. Because that cracking, normally crack as a result of traffic stress as opposed to contraction stresses. And that’s a concrete train, as it was then.