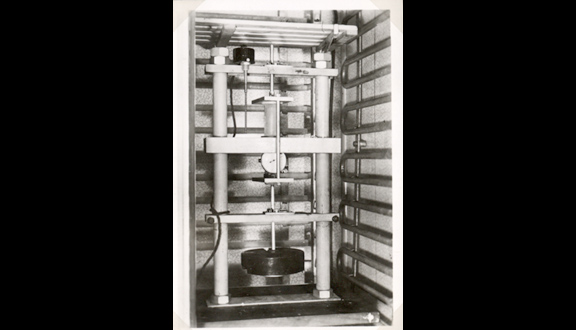 John Glen describes 'dislocations' in ice identified in the Cavendish Laboratory, University of Cambridge, in the 1950s.

As we know, things like both ice and steel do deform fairly readily when they’re put under stress, when you apply forces to them. But if you look into the physics of a crystal, which is completely joined up in a crystal lattice everywhere, it would require enormously more force than we’re apply to break all those bonds and reform them. And so it obviously doesn’t happen like that. How it does happen is that a thing known as a dislocation moves across the crystal from side to side. And one way of explaining it, which I think Bragg is responsible for, is to say, ‘If you’re trying to move a carpet over the floor, if you get hold of one side and pull, if it’s a very big carpet in a very big room, you’d have to exert an enormous force to pull it. But if instead of trying to move it at once, you make a ruck in the carpet at one end and then push that ruck slowly along until it gets to the other end, the ruck moving the whole length of the carpet has moved the carpet forward by the small amount that you had moved the first end to make the ruck.’ Well essentially you’re doing that with a crystal. You’ve got in it somewhere where two crystal bonds, one of them has been broken and pushed in a bit and then has joined up with the one behind. And then you’ve got a dangling crystal bond which can move on to the next atom to produce another dangling bond, and the dangling bond moves across the crystal in the way that the ruck moves across the carpet. And so by moving the dislocation from side to side of the crystal, you’ve moved the top of the crystal relative to the bottom by one lattice spacing. And that’s what a dislocation is.

John Glen: ice as a part of God's Creation