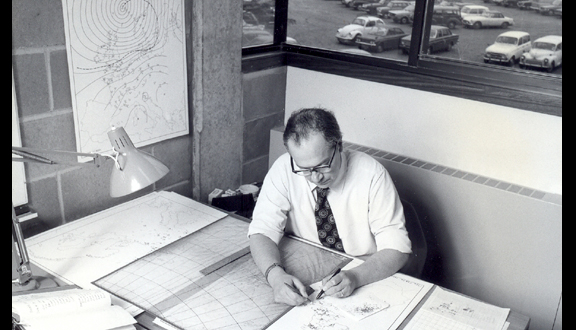 John Kington comments on the value of weather charts as background to television weather broadcasts and as historical facts.

One of my hobby horses is the lack of information given in the media when they present the weather forecasts. It’s all been, quote, dumbed down. Where they have this marvellous technology, showing the weather over the British Isles, blue areas, white areas and what have you, but I say, ‘Where’s your chart?’ And that’s how we used to start off – Michael Hunt was one of the pioneers of weather forecasting on TV in Anglia, East Anglia, all started with a synoptic chart. Once you’ve got that in front of you then you can explain what’s going to happen, why it’s happened, etc, instead of having all these pretty symbols, as it were, portrayed. I think my wife gets a little bit concerned [laughs], 'he’s going to grumble again, there’s no weather chart'. So … that’s what I feel, you know, that the actual synoptic situations and circulation patterns should be more perhaps – they seem to be afraid that the general public will not understand, but that’s not true. When Michael Hunt was presenting his charts, he had warm fronts, cold fronts, depressions, etc, and he all – every so often he’d say, ‘If you want more information, I can send you, erm, a pack, as it were, explaining all this information.’ And that’s how I started when I was at school, in geography. I saw these patterns being portrayed of warm and cold fronts and I thought to myself, well what are – what are these features, and I made it my business to find out.

The charts, which have been published by the Cambridge University Press, they cover the years 1781 to ’85, I believe. But I’ve also got charts for 1786, which I don’t think have been published, and various odd charts for other periods in the 1780s of particularly important events, like the French Revolution, things of this nature, and notable weather events. But it’s not a continuous series, so there are a lot of gaps, I’m afraid, now. And also I have, I think I told you, constructed charts pre 1780 and after 1780s for – I’ve had requests from people, you know, asking, what was the weather like when William of Orange invaded England in 1688, the so called Glorious Revolution. So I’ve got a whole series of charts for the latter part of the seventeenth century and then odd charts in the nineteenth century, the Battle of Waterloo and things of this nature, which I have a chart for.

John Kington: extreme weather events and the decline of the westerlies