John Lindgren: digging a tunnel through a glacier 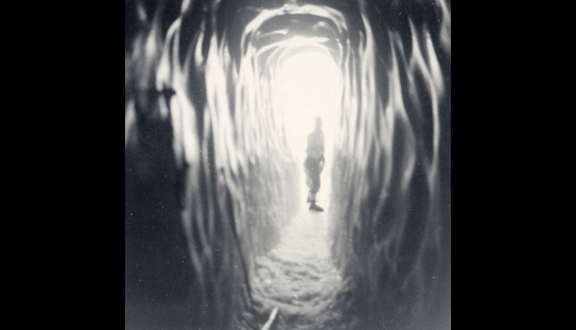 John Lindgren tells story of digging a tunnel through Vesl-Skautbreen, Jotunheim, Norway, 1951 as an undergraduate assistant.

Show full transcript
And so when we got there we would be in shifts digging in the glacier.

Could you describe what was – I know it’s a long time ago but whatever detail you have of the process of the digging, so describe – exactly what you did?

When we arrived there was already a tunnel which had been started I think in previous years and the – I think we were the second shift if you like digging a – helping John McCall who was doing the research work there, helping him with his tunnel. And we were finishing off straightening up the tunnel which had changed shape a little bit over the previous winter and then continuing on into the body of the glacier. We were – we had pick axes and we would chip away at – at the roof and the front and it was just pick axe works and taking the fallen ice out and putting it outside the mouth of the tunnel. And our tunnel when we were there wasn’t more than – I’m totally going on memory, I would say maybe twenty feet in, and so we didn’t have too far to drag the fallen ice out. But I’m – we didn’t have too much interest in what research was going on. We were the labour and it was a – a summer project and we were – we were the diggers, the grunts.

Do you remember how – how it felt to dig?

I can sense now thinking about it, the pick axe hitting the ice and it coming away in … slices and chips. I can – I can sense the effect of the pick axe on the ice and that it would come away as I say in thin chips rather than great big chunks. But it was just steady work and we kept at it, we were all – nobody told us about trade union times or anything like that [laughs].