John Mitchell: how do you look into a Global Climate Model? 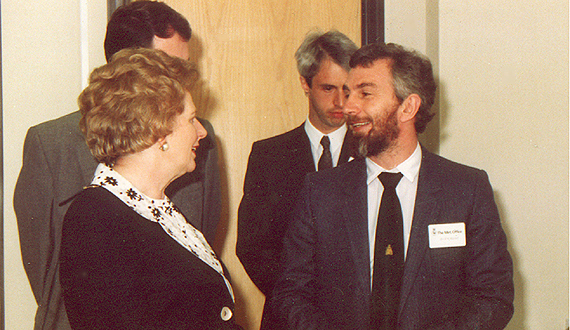 John Mitchell discusses ways of interacting with the HADCM2 Global Climate Model, developed at the Met Office's Hadley Centre for Climate Prediction and Research in the early 1990s.

Could you then first of all say what the HadCM2 model - physically and technically what is the model?

Okay, in terms of computer code in some ways it’s very similar, you – the big difference was the fact that we now had an ocean which had depth and currents, the second thing was that was where we introduced sea ice switch could move. In fact one of the things to get it working was we had to introduce dynamics ‘cause we found if we didn’t allow the sea ice to move around it tended that – it could get into a situation where you got very thick columns of ice just because it wasn’t being moved around, it was sitting in the same place.

I think what people might imagine is that you are able to inspect the model, rather like looking at something like Google Earth now which is a sort of 3D representation of the Earth and they might imagine at your desk, you know, zooming in and actually seeing in a simulated ocean a column of ice, maybe even something white on the screen going right down and you saying, ‘No, hang on a minute, it shouldn’t be going right down,’ but I realise – and they realise that that isn’t, you’re not literally seeing it in that way. So therefore how are you seeing things like that?

Well what you would do is you would plot out the ice depth against position and so you’d – this is mainly around Antarctica, it wasn’t so much the Arctic, and you would find that on certain grid points, and these grid points were typically probably in those days 250 kilometres square, you’d get a very great depth of ice, so that you get this big number. And we know in Antarctica the ice is typically, well most of it’s seasonal sea ice and it gets up to about a metre, at most two metres thick. But we were getting, you know, something up to ten metres or more.

So for each grid square for a different variable, we’re looking at ice at the moment, you’d get a number?

So rather than actually seeing on some kind of graphical display a column of ice, what you’re seeing is perhaps a grid square number and then the number that means the amount of ice?

Ice, or more likely we would use some contouring system, so you would see smoothly varying widely spaced contours over most of it and then in one of these areas were grid boxes where the ice has grown a lot, you’d get a – like a dark bit of circles because of course the contouring routine was putting in a load of contours, you know, if the contour was every metre which is quite coarse, you’d have eighteen contours if it was an eighteen metre column of ice so – and that’s clearly unrealistic, very unrealistic.