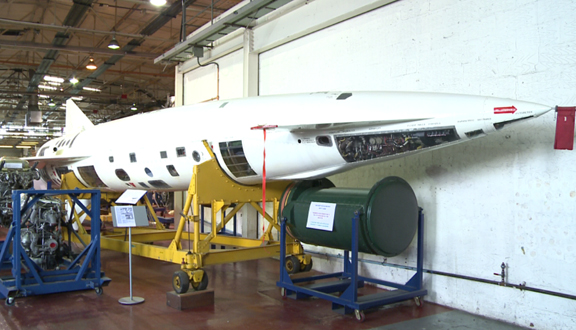 Blue Steel is an airborne missile, which relies on wings and thrust and all the usual things that aeroplanes need, but is carried most of the way to the target by a V bomber. When it gets close enough to the target, it drops this thing away from the V bomber and when it’s about a hundred feet below it, between the two devices, the V bomber and the Blue Steel itself, there is a blue nylon rope, known as a lanyard, which becomes tight, pulls a catch on the back end of the Blue Steel missile and then breaks, because it doesn’t matter. By that time what it’s done is released the high pressure nitrogen from the storage bottles into all the parts of the circuit that need it to start up. And they all sort of rev up. And believe it or not, this is then – at full performance, is less than two and a half seconds. Two and a half seconds, anyway, there’s 1,000 horsepower inside of that, driving pumps and valves and all sorts of other things. And in theory this thing then accelerates away from the V bomber. Now in practice, on the very first flight of this thing, the thing was clipped into the V bomber and approached the range place out in Australia, Woomera, where there’s two or three thousand miles in a straight run and you can have a good – good run – go at this. And as the thing was approaching this range, the aircraft was radio signalled, 'please turn off for a bit, there are people, the local Aboriginals, on the range, you can’t come in.' So this thing, at 50,000 feet, goes all the way round a large circle and is called back perhaps half an hour later. Now it’s worth remembering that at 50,000 feet, the local temperature is minus fifty centigrade, and also remember that the lanyard is made of blue nylon. The clearance is given for the launch. The Blue Steel leaves the V bomber and furling out the – this thing. It’s very much like wash line but it’s a – it’s a nylon lanyard. And when it becomes tight, it’s supposed to pull the valve off its seat. What it does it just go twang and bust because it is so brittle, having been held for an hour or more at minus fifty centigrade in the V bomber’s bomb bay as it fits right into the bottom. And the missile, instead of going a long distance in that direction, simply sort of floats away and eventually noses down gently and digs a big hole in the desert. And someone says, ‘Well, that’s the first half million spent.’