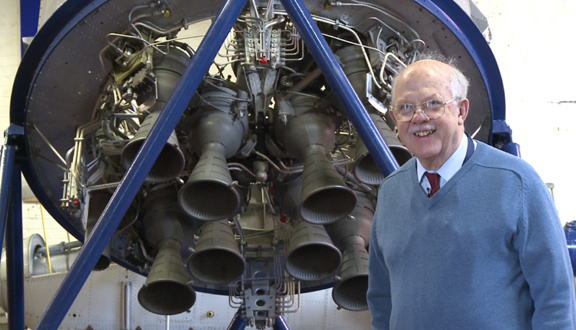 John Scott-Scott discusses why the 1980s HOTOL space vehicle, developed by Rolls-Royce and British Aerospace, would have taken off and landed like a plane.

All the sort of concepts we evaluated in the early HOTOL days, they all took off horizontally, flew around wherever they were going to fly around, and when they finished the mission to the – wherever the mission is, to some satellite station or something, or whatever, then they could come all the way back and land on the runway. Really all future rockets that are carrying people ought to go that way, off – to get off the ground. They mustn’t go vertical because there’s so much at risk and if there’s the slightest loss of thrust – well, it’s not difficult for one engine to sort of decide to [coughs] have a day off type of thing and cough, and you’ve got less thrust than you have weight. So you go down again and you become an enormous fireball. I don’t often get sort of worked up about morals but it is immoral to put trusting passengers into a thing – where, for the sake of just something mildly misbehaving – ‘cause you don’t have to have total loss of thrust, you just don’t have to have enough thrust to hold it up so that it comes like this, oh, that’s fine, isn’t it, but then it drops [drops pen]. You’re all dead as dodos and that’s it. So the early ideas about HOTOL were to – to steer round that problem and so it comes in and lands in a normal way.