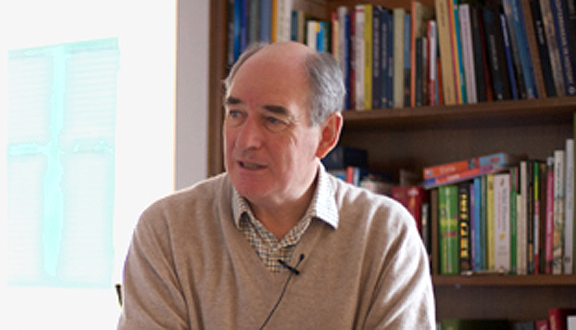 John Woods tells story of research in 1970s on movement of sound through ocean water, undermining the effectiveness of a Soviet anti-submarine weapon.

Show full transcript
I was professor of physical oceanography in Southampton and the navy started to send to me for a year successive high flying officers in the naval weather and ocean service division. And – then I had an idea that all of the navy calculations of sound were about sound being bent in the vertical, so what about adding the [ph] horizontal too. And so I set as the masters project for one of these – second of these guys, and he being a sensible guy took the idea and went down to the Admiralty Underwater Weapons Establishment and said, ‘Oh my professor’s told me to start this, what do you think about it?’ and they laughed said, ‘You’re wasting your time, we thought about that years ago,’ and of course they hadn’t, you know, ‘it’s a nonsense.’ Luckily he thought, well I’d better humour the professor [laughs] ‘cause I won’t get my degree and I can’t go back to my boss saying I – so he did pursue it and I was right and it does have a big effect. And the way to understand it is let’s imagine that’s a front, [demonstrates]. So for the recording we’re pulling a wire into a sort of – Front back line [ph] Contour, yeah. And so one side the water’s warm and the other side it’s colder. And so you’ve got a submarine sitting there, and you’ve got a ship, destroyer, chasing this submarine. If the sound is being bent horizontally and they don’t know, they think the submarine is over there. They know the distance but they have no idea, and so what they did, they shoot torpedoes through the air, they go into the water and then the engine fires up and it looks around for the submarine and chases it. And this is the standard Russian way of antisubmarine, they had the weapon that the navy was scared stiff of, but it turned out this refraction moved the submarine further than the range of the fuel in their weapon. So it just neutralised the major soviet weapon for antisubmarine warfare, at a stroke. And do you know, the first I heard about that was when I met the chief oceanographic advisor to Gorshkoff [ph] then, the soviet navy at a meeting, both of us pretending to be civilians and very sweet and innocent but both knowing who each other was. And he came up to me and said, ‘I’ve got two words for you, asimerthal refraction,’ he knew all about it. Gordon Lonsdale had passed it from the Underwater Weapons Establishment to the Russians almost before NATO had heard about it [laughs]. But they knew about it but it killed their weapon. Their weapon was useless, I thought rather good [ph] [laughs]. Amazing. So this young naval lieutenant commander did go up to be commodore and did have a good career and he’s still – we meet – we meet at the Meteorological Club, he’s – that was fun [laughs].