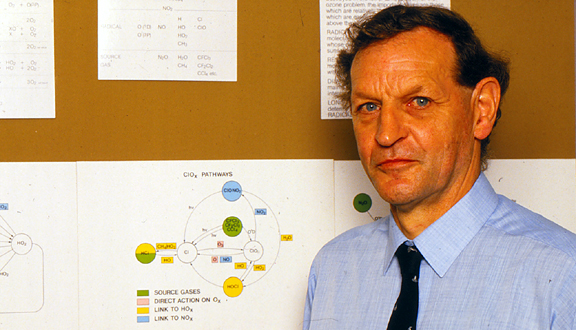 Joseph Farman remembers his reaction to low ozone levels recorded by the British Antarctic Survey over Antarctica in the early 1980s.

Show full transcript
If we can return to your story at the point we left it, which was just at the time in the early ‘80s when you were beginning to receive back from Halley Bay and Argentine Islands, low results for ozone levels in the spring. Could I ask you to tell the story of your memory of beginning to receive those low results?

[Laughs] Yes, you make it sound as if we had nothing else to do. Unfortunately that wasn’t the case. And the two co-authors of the paper, their job was to keep an eye on things as they came in, and so actually I heard about this a little bit late. And my first reaction, as anyone's should be in essence, is if your observations of ozone start to change you should be – the first question you should ask is, ‘Has something gone wrong with the instrument?’ And so you have to go through all the procedure of the calibrations and comparisons and so on and so forth, and convince yourself that it’s not the instrument, or the people operating it, but that it’s actually something real. By the time this was sorted out the sort of next lot of observations we looked at just had got considerably lower. And it was then fairly obvious that you had to believe it or not, and if you believed it you had to publish it pretty quickly ‘cause it was fairly clearly important.