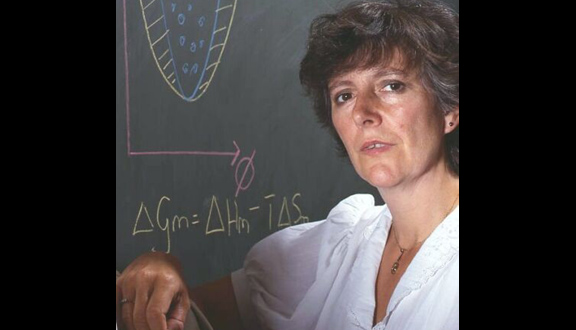 Show full transcript
I arrived in Paris on 1st November with ordinary level French, struggling to understand how to get to the hostel where I was staying. I remember listening to the – the pattern of train stations that the train was going to stop at again and again and again, trying to pick out the station that I was supposed to go to. And the person who was supposed to meet me hadn’t met me. What I hadn’t realised, but had ingrained on my thinking subsequently, is the 1st November is a public holiday in France. During the time that I was in Paris I was working in a French lab and so although people could speak English it would have been unreasonable to ask them to speak English all the time. So that’s when I learnt most of my French. When I went to Grenoble, that was a French, German, British joint venture and the common language was English. In fact the Germans and the French had got together first and were using English as the common language as a compromise, so when the English came in we just did well out of it, which is probably a good thing ‘cause I doubt that our foreign languages would have been as well. So I – I probably learnt not much more French once I was in Grenoble, although I practised it. But certainly the time in Paris, I went from very poor O level French to being able to have a conversation. I know – I remember distinctly thinking that I was arriving in French when I was able to get angry on the telephone in French. It really was an international community. It was great. There were different styles in doing things and sort of – well, there were different styles in doing science, to the extent that – I exaggerate, but if you were within the French scheme, if the great French theoreticians had predicted something then you did an experiment to find it. From the British side, it was a much more open thing. It was – at least it felt like that to me. It was – well, it’d be interesting to look at this sample and see how it behaves, without a preconception about the theoretical function that one expected to fit whatever one was going to observe. Now that is certainly an exaggeration but there was – there was a difference in style. And the Germans also tended to have a slightly different way of designing experiments, in the way which they thought about which order you did things. It’s – it’s quite subtle but undoubtedly there – there was – it came out of the education system, I’m sure. And I mean, the national characteristics would just come through, you know, and the French had their French ways and the Germans had their German ways and the British had their British ways, and I can’t put my finger on – I wouldn’t say that we were caricatures, but there was a slight formality about the Germans. I do recall the Germans talking to us and the question was whether you could – if you said anything to them in German, whether you could call them du or ze. The French were more relaxed but you still had to think about tu and vous, and of course we didn’t have to worry about it at all. The French, for example, would tend to come in in the mornings and shake hands with everybody in the office or the lab. It was a sort of formal greeting. Well, I don’t think most British people do that and I suspect the Germans were probably more similar to that, but the French certainly – there was a sort of – going round shaking hands with everybody.