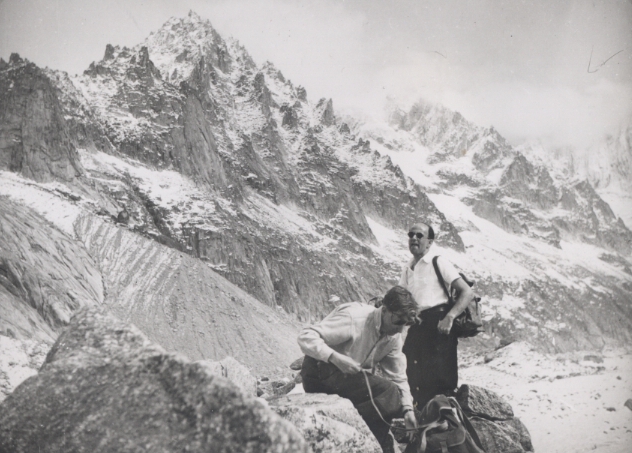 Max Perutz explains how he investigated the way glaciers flow by placing a vertical steel tube through a glacier in 1948.

And that got me interested in the mechanism of glacier flow, which at that time was controversial. Some people maintained that the glacier flowed faster in the interior than on the surface, and others said it flowed faster at the surface. And it wasn’t quite clear how a crystalline body could flow at all, you know. After all a glacier is solid, so how can it flow? And in the Cavendish I had a colleague who was a metal physicist, and from him I learnt a lot about the way metals flow, which are crystalline, and we realised that probably ice flows must be similar. And to turn this into a proper scientific project, I founded a Glacier Physics Committee at the university, where some outstanding physicists joined me. Between us we decided on a scheme to try and drill a hole in the glacier from the surface to the bed, to line the hole with a flexible steel tube, and to survey the inclination of this tube initially, and again after one year, and after two years, with the expectation being that the tube would be carried along with the flow in the ice. The idea was to get something like a large soldering iron which would melt a hole and to line that hole with a steel tube all the way from the surface right down to the bed.