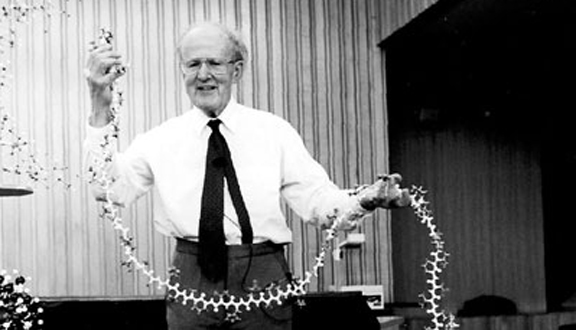 Max Perutz tells the story of the decision to work on the structure of haemoglobin crystals for his PhD in the late 1930s.

Show full transcript
It came home to me that now I had been doing research in Cambridge for a year and I had no subject for a PhD thesis yet. And I really wanted a biological problem, and I remembered that a cousin of mine in Prague was married to a biochemist, a Professor, young Professor of Biochemistry, at the Charles University in Prague. I took the train to Prague and visited him. And one of –

What was his name?

Felix Haurowitz. I suggested to him that I could perhaps determine the crystal structure of the red pigment of haemoglobin, the haemin, but he pointed out to me that Fischer in Munich had already synthesised that and everything was known about it and there was really no point in determining its structure. But he said why not work on haemoglobin itself? And the idea appealed to me, but I wondered how I could get hold of crystals of haemoglobin. So Felix told me that there was a biochemist here in Cambridge, Adair, who had actually crystallised haemoglobin, and I should try and ask him. I went back to Cambridge, but in those days you couldn’t just barge into anybody’s room and ask him, ‘Will you give me some haemoglobin crystals,’ you had to be introduced to people, but perhaps through Bernal, Hopkins’ daughter, Barbara Holmes, invited me to a lunch party with Adair. So I was introduced then, told him that what I would like to do. And one day he appeared in the crystallography lab with some tubes of haemoglobin crystals. He was a terribly modest man, he was a Quaker, and an endearing character, but very diffident and he said that they’re very small crystals and probably would be no use. But in fact they were marvellous, and I put them on an X-ray camera and immediately got a lovely X-ray defraction picture.