Michael Forrest: applying for a job at Harwell 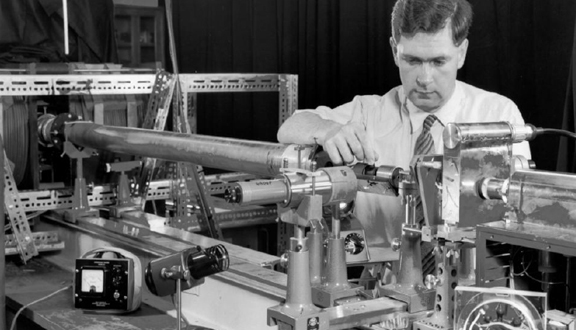 Michael Forrest recalls how he came to apply for a job at the Atomic Energy Research Establishment at Harwell.

The honest truth is we knew absolutely nothing. As far as we were concerned it was a secret place. I only managed to get a job there because we had a visiting lecturer at college, a friend of the head of department, and he’d been quite a senior chap in electronics in Harwell, and a friend of mine, Albert Packwood. And I went up to him after his talk and asked, ‘How do you apply for jobs in Harwell?’ And he said, ‘No problem, I’ll send you the application forms.’ And then about three days later an application form arrived, filled these in and then I was invited for interview - come to Harwell. I didn’t apply for any particular job there, you just applied for a particular grade, because the jobs weren’t advertised. That was a very formidable affair. It was my first experience of a proper civil service interview. There was a chairman and four scientists. The chairman was a very senior grade scientist and there were four other scientists there. I didn’t – you weren’t told who they were. All you were told, their names and you didn’t know what they represented or what, but in fact they represented four different aspects of Harwell. And then there was a secretary to the board as well. And the format was that they just asked you to speak for three or four minutes on what things you’d done, your actual experience. I was struck they weren’t particularly interested in – in the degree course, they were more interested in the things you’d done outside that. I was quite surprised I didn’t get any really hard physics questions at all, because they were just purely interested in what I’d done. And also they picked up on the fact I was a keen photographer and they gave me a real grilling on the actual physics of photography, you know, the optics and that, which I could handle quite well ‘cause I’d actually – purely ‘cause I was interested, so I knew a lot more than a standard physics course teaching in a university. I think the interview lasted about three quarters of an hour, could even have been lower, but it was very friendly and, you know, no really incisive questions. You could feel they were trying to see what you could actually do rather than [laughs] what you didn’t know. They said, ‘Oh well, perhaps if you wait outside, we’ll call you back in and we’ll tell you our decision.’ So after a while the secretary of the board came out and said, ‘Mr Forrest, come back in.’ And the chairman said, ‘Well, we’re pleased to tell you that you’ve passed the board, but four people have actually bid for you. All four have offered you jobs.’ [Laughs] So that slightly – made me feel really good.

Michael Forrest: turning up at the gates of Harwell in 1957