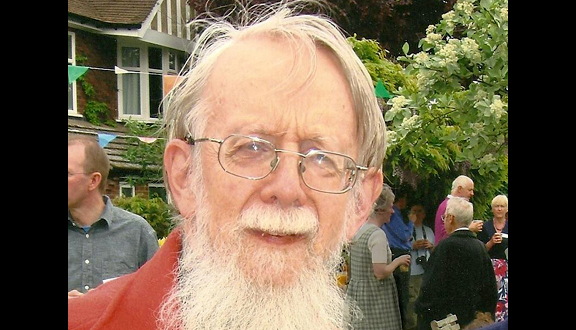 If you think about weather systems in the atmosphere, you’ve got these meandering jet streams and these cyclones and anticyclones at the Earth’s surface and there’s a – they’re all part of the same flow system. And the reality is extremely complicated and you can’t hope to understand every detail of it but what is amazing is you can understand some aspects of it. And the way you begin to understand something like that is to as it were do simplified thought experiments. Okay let’s imagine that there wasn’t any geography, that let’s take away the land sea contrast, let’s have what people call an aqua planet, nothing but ocean and atmosphere, and then on such a planet you can imagine that the flow could be just a symmetric flow around latitude circles. We do expect some sort of flow because the Sun’s shining and it must be driving some sort of motion. Now just imagine somehow a flow around latitude circles has been set up from west to east let’s say, so it’s a bit like the wheel flow except it’s been straightened out to just go around and around latitude circles. And er, I’m going to now do a thought experiment where I start that going like a great flywheel and then ask will it stay that way or will it be unstable, will it develop eddies or waves or something? And you – that’s a doable problem and it’s that sort of problem I was investigating, or one aspect of that sort of problem. The answer is that it is unstable if you give it realistic conditions, a bit like the real earth, you know, such as being warmer in the tropics and colder at the poles and so on and rotating at about the right rate. And then you do that problem you find it is unstable and if you start with a wavy motion, no matter how tiny the amplitude, the wave will grow like compound interest, it grows exponentially fast on a certain timescale, few days in the case of the Earth, you see remembering typical orders of magnitude, part of understanding something. And then when the amplitude gets large the flow tends to sort of wrap itself up into great big vortices and these are the cyclones and anticyclones we see on weather maps. So there we have already a piece of understanding which says even if you didn’t have the land sea contrast you would still have cyclones and anticyclones.