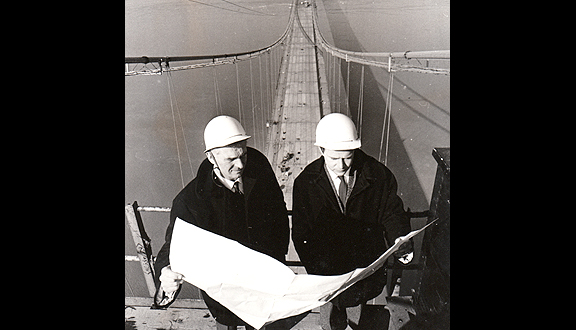 Michael Parsons discusses the importance of knowing the ground underneath a bridge construction site whilst building the Severn and first Bosporus Bridges.

Show full transcript
The only doubtful foundations on the Aust side were the foundations for the – for the viaduct, there were two – two piers out from the cliff before you got to the anchorage and they were based – instead of being on the hard limestone like the anchorage in the main pier they were on mud stone, a form of red marl. And it was very difficult to tell – well you couldn’t tell just by looking at this mar whether it was going to be hard or soft, obviously the stuff that was on the surface was hard otherwise it would have been washed away but when you dug down to make the foundations you could come across other stuff which looked like the hard stuff but if you left it to soak in a bucket you’d come back and find there was just a lot of dust in the bottom of the bucket. So there was a certain uncertainty about those piers but we, you know, we got down to what we thought was considerable – suitable rock to [inaud].

How much do you actually have to know about, you know, the soil, the ground underneath?

Well you – you carry out borehole tests and you take out samples and you test the quality of the rock, and you think if you’ve got down far enough then it’s alright, because as you go down the load in spread out into the mass of the rock. You often do come across differences, I know on the first Bosphorus bridge we had – I had a lot of trouble on the pier on the Asian side there. On the face of it it was just a simple pier, just a bit of rock and not very big and build the pier, but wherever we looked and did drilling the rock wasn’t as good as it should have been. But there again in the end by going deeper and doing more tests we finally ended up with something that was good enough.