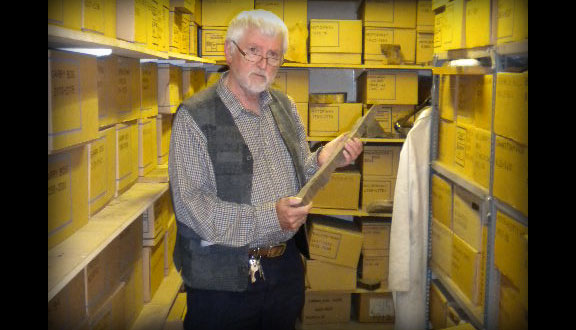 Mike Baillie explains why he found the construction of an Irish oak tree chronology in the late 1960s and 1970s so addictive.

Show full transcript
What was going on outside of work for you in the late ‘60s and ‘70s, let’s take that period, what did you do when you weren’t working?


Worked [both laugh].  One of the problems with – with research when – anyone listening to this will have detected a tone that – that schooling and university had been a somewhat chequered occupation for me and they had been, largely because I didn’t see what was in it for me; other people were teaching me things that they always knew more about.  And I had marginal interest in most of what I was being taught.  When I discovered archaeology, archaeology, it sounds extreme but it’s a subject about which you can develop a love affair, it just takes over your life.  And you just want to be involved in it and of course what I was doing was building a chronology which I hoped would put backbone into the whole of Irish archaeology.  And notice I say Irish archaeology because I really wasn’t that interested in English or Scottish or anywhere else, the archaeology of anywhere else, I was interested in the history of Ireland, something I’d never been taught at school which I rapidly developed from 1968 onwards.  Because of course if you’re becoming involved with oaks of all periods you’re going to get involved with the archaeology of all periods.  And of course this was a – a voyage of immense discovery because I had no background in any of this.  So everything was new and everything was exciting and of course we were actually contributing dates to things, we were finding stuff out right from the beginning.  And that’s addictive, that I think I used to put it like this to people: it’s possible to become a data junkie, you become – you get a buzz from the fact that you’re the first person ever to see this information.